Hamilton, Bermuda: Adam Minoprio is a past match racing world champion (2009) but hasn't sailed a regatta this year. Today he made an emphatic statement in his return to the helm.

Minoprio has previously finished runner-up twice (2008, '09) and today he had to work hard for the victory. With a southerly wind blowing around 10 knots the crews were racing the width of Hamilton Harbour. That placed the windward mark under the southern shore and in very shifty and patchy winds.

Minoprio and Swinton made the final after winning their semifinal matches against Taylor Canfield's US One and Björn Hansen's Nautiska Racing, respectively.

Canfield entered the final day of racing with an undefeated record (10-0) and seemingly on a course to the championship. He chose to race Minoprio because he thought that the Kiwi was rustier than the other sailors since he hadn't match raced all year. But that decision backfired in the fifth and deciding race.

Minoprio was over the start line early in the final race, which gave Canfield a large early lead. Canfield maintained that advantage around the course and led by about 30 seconds at the final windward mark. After rounding he jibed to starboard while Minoprio held port after rounding. Moments later it was apparent that Canfield was in trouble as his spinnaker hung from the rigging. Minoprio, however, was sailing down in a nice streak of pressure that he used to cross the finish line about two lengths ahead of Canfield and into the final.

The M32 high-performance catamaran will be the featured boat on the World Match Racing Tour (WMRT) next year. The next Tour season will run from February to July and will conclude in Marstrand, Sweden. It will feature as many as six events.

The 2016-'17 season will begin in August 2016 and will be comprised of as many 11 world championship events, all sailed in the M32. The goal is to have 11 WMRT events per season featuring 20 teams per event and a prize purse of US$1 million for the World Championship in Marstrand. Each event will offer a US$200,000 prize purse and winnings will be distributed to every team entered.

The new racing format will be a mixture of fleet racing and match racing.

The M32 Series is a team-based professional sailing series that utilises fleet racing as the race format. After three years of competition, the M32 Series Scandinavia has set the benchmark for future M32 Series events.

- a good honours graduate or an individual who has received relevant training to an equivalent level, and or
- a person with experience of managing a small or medium sized business within a team structure
- someone who would like to dedicate his/her talents and experience to the development of young people through sport, and
- has the ability to work successfully with dedicated volunteers and executives in a truly global business

The individual shall be able to:
- write and speak perfect English
- understand the sport of sailing at competitive level
- have enthusiasm for the development of young people through sport
- demonstrate exceptional organisational skills
- have a high level of numeracy
- be flexible regarding working hours. This is NOT a 9-5 position.

We offer:
- an exciting and important role in a truly exceptional organization.
- flexible working hours and location, if preferred from home
- competitive remuneration

To apply
- The full job description is available on our website: www.optiworld.org

Please email your CV and tell us why you are applying for this post to: 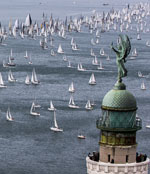 The Maxi 72 Robertissima lll took line honours to claim victory in the 47th edition of the Barcolana in Trieste in a time of 1 hour, 18 minutes and 25 seconds.

Organisers had delayed the start by two hours on Saturday when the local 'Bora' blasted the Gulf of Trieste with gusts of 80 knots during the night. However fortunately the Bora subsided by morning and left mostly overcast skies and a light and patchy 5-10 knot offshore breeze and flat waters for the start of the race at 12.30hrs (local time).

The highlight of the Barcolana is always the mass start with around 1700 boats starting on the same line, but as the cannon fired, owner, Roberto Tomasini Grinover with local talisman Vasco Vascotto calling the shots, hoisted the gennaker and shot off downwind ahead of a huge armada of spinnakers.

The breeze got quite patchy around the 13 nm course and there were opportunities to make gains and lose places, but the superior boat speed of the lighter professionally crewed Maxi 72 left the larger/older maxis in her wake.

As the breeze got fluky along the Trieste coastline off the last turning mark at Cas-tello Miramare, Robertissima lll got clear to cruise home to finish in front of a huge expectant crowd amassed in the race village erected in front of another key Trieste landmark, the Piazza Unità d'Italia.

Second to finish was Jena No Borders Team Iveco, an 80ft maxi owned by Benussi Furio and Zorzi Marcello. The final position on the podium was filled by Pendragon, another one off maxi owned by Roberto Zambezi. -- Jonny Fullerton, Grand Prix Sailing 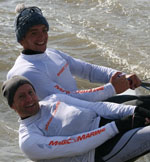 Burnham-on-Crouch, Essex: Ben Saxton and Toby Lewis representing the Merlin Rocket class are the winners of the 2015 Endeavour Championship after winning all eight races.

This is the first time in the history of the 55-year event that anyone has managed to achieve such an outstanding result.

The super-fast duo annihilated the rest of the 23-boat Endeavour fleet in the fresh conditions Sunday to add another four wins to their already impressive run of four wins on Saturday. The pair sailed faultlessly and managed to build up extraordinary speed both upwind and down on the windward/leeward courses and never once wobbled on the 'corners' in the testing conditions that reached 20 kts at times.

Even after mediocre starts on more than one occasion, Saxton and Lewis were always first round the top mark. Benefiting from clear air, exceptional teamwork, and supersonic boat speed, they consistently extended their lead often finishing well over a minute ahead of the next boat. Consequently they were never seriously challenged today, even by the likes of six-time Endeavour Trophy champion, Nick Craig and crewman Tom Pygall who had to settle for second overall, and Saxton's twin brother - Tim Saxton and Fiona Hampshire - who finished third.

Five-time Endeavour winner Lewis (34) who also makes history by becoming the Champion of Champions' crew for the most wins. -- Sue Pelling

The number of entries to the 2016 edition of Quantum Key West Race Week has just hit 100, indicating one of the strongest early turnouts in years to this mainstay on the international sailing calendar held over January 17-22, 2016. Currently there are 16 classes organized: nine one-design and seven monohull and multihull classes racing under handicap. This indicates a diverse range of boat types attracted to race in the winter sun in Key West, with teams from 10 nations represented among the entries thusfar.

Besides providing the best in race management on the water, organizers from the Storm Trysail Club will enhance the shoreside experience for all entries with afternoon seminars, evening prizegivings and social events, and full logistic support through their partners and vendors on site...plus the unique ambience offered by time spent in Old Town Key West.

Complete version of the Notice of Race: issuu.com/glpubs/docs/qkwrw2016_nor

Mohammed Al Alawi Still Missing At Sea
Mohammed Al Alawi, 26-year-old crewmember of MOD70 trimaran Musandam-Oman Sail remains missing this evening following a Man Overboard incident last Wednesday 7 October in the early hours of the morning, pre-dawn, just south of Pula in Croatia while the MOD70 was en route from France to Trieste in Italy for the Barcolana.

Day four and the extensive search for Mohammed continues and the search area has extended into Italian waters; the search team has been a mix of Oman Sail, private search and rescue companies and the Croatian coastguard, using helicopters, airplanes, and boats including Musandam-Oman Sail. Today's inclement weather of strong easterly winds, limited visibility and rain was not conducive to a detailed search.

Ahmed Al Alawi, father of Mohammed, who is in Croatia with the team said "We [the family] extend our deep gratitude to all who are supporting this search, especially the Omani Government, the staff of Oman Sail, Her Excellency The Sultanate of Oman's Honorary Consul of Croatia and the Croatian Coastguard who have been exemplary. We have been inundated with heart-felt messages of support which are much appreciated." The search continues.

Eighteen year old, David Gonzalez Arria had an impressive run of eight race wins during the three day series. Clemente Seguel of Chile also sailed consistently with all finishes in the top three to finish second overall. Rounding out the podium positions in third place was Ignacio Rodriguez of Uruguay.

Strong winds challenged the sailors on the first two days of the regatta and lighter breeze was a welcome change for the final day of racing. Thirty eight competitors from nine countries participated in the championship. The Youth World Championship was open to qualified sailors under the age of 19.

Old numbers are starting to fall off the scoreboard. Martin Hulinsky, from the Czech Republic, set a new national speed sailing in kiteboarding on his first day, and first ever participation at the Luderitz Speed Challenge. Martin did 40.83 knots.

* From Eddie Mays: I read that the current round of match racing taking place at the Royal Bermuda Y.C. is being contested in International One Designs. Looking at the images these seem to be very different yachts from the elegant open cockpit yachts that used to grace the Solent and sail to their moorings up the River Hamble in the late 50s & early 60s. Are they the same beasts ? No doubt one or more of your learned readers will set me straight.