The early leaders in the $100,000 match racing regatta, an event of the World Match Racing Tour, are Eric Monnin's Swiss Match Race Team and Taylor Canfield's USone. Monnin won three of his four races to top Group A with 3 points and Canfield leads Group B with 4 points. Each group is slated to sail seven races in the rounds robin.

The conditions were a handful, even for the experienced crews. The crews in Group A this morning saw wind gusts up to 28 knots during the second and third flights, making boat handling as difficult as it gets. The International One-Design (IOD) sloop is narrow at the waterline and when the spinnaker starts oscillating from side to side in a gust, it takes the boat with it.

Experienced skippers such as Dean Barker (SoftBank Team Japan) and Blythe Walker (Team RenRe) wiped out in spectacular fashion and the boats took a beating. The official breakdown list included four torn spinnakers, one broken gooseneck, one broken mast crane, one lost anchor chalk and a few collisions, including one with a concrete pier.

Clipper Race Departs Rio
Rio de Janeiro: The second race in the Clipper 2015-16 Round the World Yacht Race series, The Stormhoek Race to the Cape of Storms, started off the Brazilian coast today for its 3,417 nautical mile voyage to Cape Town, South Africa.

LMAX Exchange and Qingdao are anticipated to start racing on Sunday 11 October after repairs are completed following LMAX Exchange running aground while being delivered to another marina and Qingdao getting into difficulties while offering assistance.

The Clipper Race fleet is due into Cape Town, between 21-25 October and will be berthed at the Victoria and Alfred Waterfront until 31 October.

To track the fleet's progress in the race you can follow the Race Viewer at www.clipperroundtheworld/raceviewer

The fast and fun sportsboat with a canting keel. Developed by Swing Keel Sailing Ltd.

After a fantastic season with two tours around Central Europe SK2 is now showcasing at the Salon du Leman in Geneve, Palexpo, 13-15-15 of November 2015. Invited by our Swiss agent Sailing Corner we are delighted to attend this exclusive boat show.

For more information on the SK2 and what it has to offer visit www.sk2sailing.com

Capital Plan Support For Tall Ship Initiative Is 'major Breakthrough'
The Atlantic Youth Trust's Neil O'Hagan has described as "a major breakthrough" the sail training initiative's inclusion in the Government's recently announced Capital Plan for the next five years.

"This is the first clear, public commitment from [the] Government that they intend to work with sources in Northern Ireland to deliver our plans [to build a replacement for the tall ship Asgard II]," said O'Hagan. "More importantly, it is a clear commitment by the Government to invest in youth development, the maritime sector, and cross-border relations.

The trust's proposals for a new sail training tall ship for Ireland have already attracted the support of a group of influential business people including financier Dermot Desmond,Denis O'Brien and CPL Resources founder Anne Heraty.

The Piraeus event marked the final leg 4 of the Hellenic Match Racing Tour, the culmination of earlier stages hosted at three Greek locations.

With points from each stage counting towards the overall series ranking, this final event kept the door open for all teams to claim the crown, with every team having the chance to qualify to the grand final. In the qualification round of this last event, the overall leader came face face with the last team on the leaderboard.The second placed team faced the seventh team and so on, meaning any of the teams could advance to the semi-finals.

In the Grand Final, Alexandros Tagaropoulos and Hellenic Police couldn't conjure up their earlier magic, and after 4 matches were defeated by Panagiotis Mantis and his Nespresso VMG Team.

The Italian and Croatian coastguards are assisting with the search and rescue operation for missing crewmember Mohammed Al Alawi (26). Wind speed at the time of the MOB was 15-17 knots.

Mohammed's family has been notified and Oman Sail team members are with them and supporting them through this uncertain time.

It will be the first time an Extreme 40 team has been led by a female skipper since double Olympic gold medallist Shirley Robertson in 2009, and the duo will take on the fleet of eight elite Extreme 40s as they battle it out at the end of season showdown, from the 10-13 December.

Spithill and Jackson will be joined onboard '33 South Racing' (33SR) by multiple A-class world champion Steve Brewin and World Match Racing Tour sailor Henry Kernot, with a fifth crew member to be announced in the coming weeks.

Seahorse November 2015
What's in the Latest Edition Of Seahorse Magazine 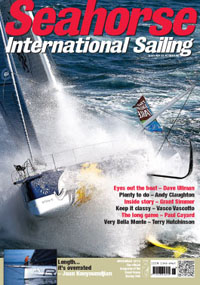 Paul Cayard
Sometimes it's fastest to lift off a little

ISAF column
Not perfect but certainly getting there - Rio 2016

Industry News
A settlement agreement proposed by the city of Miami and the village of Key Biscayne that would end a dispute over the Miami Marine Stadium Marine Park will not thwart the Progressive Miami International Boat Show from taking place there in 2016.

The Miami Herald reported today that a settlement agreement had been drafted between the two parties in an effort to resolve the lawsuit filed by the village against the city over plans to hold the boat show, and potentially other large events, at the stadium, which has languished since Hurricane Andrew slammed into it in 1992.

The village can buy a stake in how the new park and event space will operate on Virginia Key - for $12.5 million - starting with the massive Miami International Boat Show, according to the Miami Herald.

Under the agreement, Key Biscayne and the city of Miami would operate the facility next to the Miami Marine Stadium together through a semi-independent park conservancy as long as the village pays about half the cost of the project.

For all those who have ever wished for a little help at the helm, Harken and Jeanneau are pleased to announce the result of a three-year collaborative effort to re-imagine cruising and shorthanded sailing. This collaboration has produced an advanced system to make sailing easier for families, cruisers, shorthanded crews, solo sailors, and those with limited mobility.

For all those who have ever wished for a little help at the helm, Harken and Jeanneau are pleased to announce the result of a three-year collaborative effort to reimagine cruising and shorthanded sailing. This collaboration has produced an advanced system to make sailing easier for families, cruisers, shorthanded crews, solo sailors, and those with limited mobility.

Jeanneau will debut the Auto Tacking and Auto Trim packages on its Sun Odyssey range under the name Assisted Sail Trim (AST). The AST will be exclusive to Jeanneau Sun Odyssey during the 2015 season.

Peta Stuart-Hunt has been re-appointed by the Royal Southern Yacht Club (RSrnYC) as its Marketing & Media Consultant covering most aspects of the Hamble-based Club's requirements. The Club has extended Peta's remit to include marketing strategy as it moves into an exciting new phase in tandem with the recently commissioned 66-berth Prince Philip Yacht Haven and expands both its on-water and shoreside capabilities and events.

In addition to her consultancy role with the RSrnYC, Peta is also year-round Press Officer for the J.P. Morgan Asset Management Round the Island Race, handles Marketing & PR for Hudson Wight Performance Sailwear, represents solo sailor Lizzy Foreman/Lizzy Racing, who is currently undertaking her first Mini Transat, and is PR consultant to the RORC Rating Office, amongst others.

boats.com, part of US-based Dominion Marine Media (DMM), has reached two major milestones on its YouTube channel, with over five million video views and more than 10,000 subscribers since its launch in 2009.

boats.com is also driving its presence in Germany following the launch of a dedicated German YouTube channel - boats.com Deutschland - earlier this year.

Dutch superyacht-builder Jongert has been sold to Acico Yachts of the Netherlands for an undisclosed sum.

The news comes not long after Jongert told Superyacht Business, that it was actively seeking an investor after falling on hard times.

Acico Yachts was founded in 2010 after the takeover of Dutch Yacht Builders. In the past five years, the company has delivered the 49m MY Nassima, the 47m MY Lady Dee, and the AY74. Acico has also built hulls and superstructures for other Dutch shipyards as well as Germany's Drettmann Yachts.

Jongert, a brand founded in 1953, specialises in semi-custom and custom sailing and motoryachts of up to 60m. Its strength, however, lies in performance and cruising sailing yachts.

"We have been working hard at developing a new structure for the Forum, with a new team of dedicated people, new partners, a beautiful venue and an exciting programme. We regard this support from the Volvo Ocean Race as a strong mark of confidence, which we are proud of."

Knut Frostad, the outgoing CEO of the Volvo Ocean Race, has been an avid supporter of the Yacht Racing Forum since its debut in Monte Carlo in 2008.

He will once again be a speaker at this year's conference, looking back at what he has achieved as Volvo Ocean Race CEO over nearly eight years at the helm.

The America's Cup representation deal for Mediapro Asia follows closely after the appointment of the agency as LaLiga's exclusive agency for Spanish League rights and the Copa del Rey.

Situated between Bordeaux and Toulouse, in the Lot-et-Garonne, Plastinov, a company of 35 employees, has, for the past 30 years, been manufacturing large composite pieces, including fibreglass and polyester.

The company's exceptional skill in the making of fiberglass - epoxy resine parts and in the conception and manufacture of large dimension heated moulds means that is a natural partner for Multiplast - Groupe Carboman, allowing it to broaden its expertise and to operate in new areas.

Specialising in the manufacture of prototype wind turbine blades and nacelles, Plastinov creates and builds parts for industrial, aerospace and sailing sectors. Through its division, Plasteol, it also takes charges of the maintenance of the wind turbines. The acquisition of Plastinov will reinforce Groupe Carboman's production capacity and means that the group now has a workforce of some 170 employees spread between Vannes and Marmande in France and Ecublens in Switzerland.

With one owner from new this fast, comfortable cruiser/racer has a proven track record having taken part in the infamous 1979 Fastnet. Continually maintained and upgraded this all time classic of yacht is most certainly worth a viewing!