Big Breeze Secures Victories For Alinghi & Oman
With rain squalls scudding across the sky at up to 42 knots, the final day's racing was abandoned at Marseille One Design, the concluding event of the Bullitt GC32 Racing Tour 2015. Thanks to some strong performances earlier in the regatta, Alinghi won the regatta, while Sultanate of Oman's 3rd place in Marseille was sufficient to make them champions of the season.

Even if there was no racing, the sailors enjoyed some sensational speed runs across La Rade d'Endoume in front of Marseille's spectacular shoreline. A first timer in the GC32, Nathan Outteridge was keen to make the most of his guest appearance at the helm of Oman's foiling catamaran and was pushing the boat hard while waiting for racing to get underway. "We hit 36 knots today," grinned the 2012 Olympic Champion, who also managed to pull off a few full-foiling gybes. "Actually we were a bit disappointed not to break the 40 knots! The GC32 and the way its foils are configured make it very forgiving for high-speed sailing. We were loving it. Any chance we get to come back and races these boats again, we'll take it."

Nicola Groves hailed a 'fantastic' victory with Ben Saxton at the Nacra 17 European Championships, which concluded in Barcelona on Saturday 3 October.

Groves and helm Saxton negotiated a tricky six-regatta, beset with weather disruptions, to head into the final medal race at the top of the leaderboard but effectively level-pegging with Australia's Darren Bundock and Nina Curtis in the chase for overall event gold.

A short postponement to the final day's racing set the scene for a tense medal showdown, with a number of place changes keeping the British duo fighting until the end. A fifth place in the medal race to the Australian's sixth was enough to hand them the top spot of both the European and Open European podia.

Sevenstar Yacht Transport the world's leading provider of yacht shipping services is looking to further expand its services and is actively looking to recruit a high class individual to head up the yacht racing logistics division.

The right candidate should have a proven track record and be a self-motivated individual with hands on experience having existing contacts within the world's yacht racing circuits. You will be responsible to build the division on a global basis, actively approaching new contacts and to grow an existing client base and markets where we are already established. The role would see you managing relationships with yacht owners, captains and other stakeholders utilising the global offices and agents that we have established throughout the world. 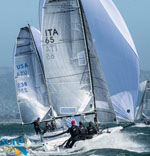 The final day of Worlds in San Francisco culminated in two final races that were absolute knock-down drag outs, literally for some. Early forecasts predicted the breeze would get bigger as the day went on.

The IAM20CA moves on to Miami and to Monaco for the commencement of the Winter Series racing regattas. Registration is already online for the three 2015/16 Miami Winter Series events. More information can be found online regarding the events in Europe at http://melges20.com

Extreme Sailing Series: The Wave, Muscat Wins In Istanbul With Two Races To Spare
After 31 hard-fought races over four days at the mouth of the Bosphorus, British helm and two-times Series champion Leigh McMillan led his crew to an impressive 25 podiums. McMillan, Sarah Ayton, Pete Greenhalgh, Ed Smyth and Nasser Al Mashari averaged 9.1 points per race, the highest at an Act since the beginning of 2013 according to SAP Analytics, and winning 40% of the races.

Even with a broken jib halyard in the penultimate race stopping play for the Omani team, the fleet could do nothing but watch, as McMillan took the Act victory with an outstanding two races to spare.

Going into the 2015 Extreme Sailing Series double-points final Act in Sydney, The Wave, Muscat has an 11-point cushion at the top of the ranking after winning five events on the eight-Act global tour.

Hoping to challenge them for the Series title, SAP Extreme Sailing Team and Red Bull Sailing Team will need to find another gear as McMillan and his crew continue to demolish the opposition.

The home team, Seawanhaka Corinthian Yacht Club, have won the Islands International Challenge Cup for two boat team racing. Their team led by commodore Hugh Jones were tied on ten wins with England's Royal Yacht Squadron, but took the trophy on a count back.

Chris Hogan led the Royal Perth Yacht Club team to third place with six wins. This is the best result for the newly formed team racing squad for the former holders of the America's Cup.

The event was blighted by foul weather, which led to a much curtailed series. With a brutal weather forecast, the race committee pushed the schedule on the first day getting three round robins completed.

An attempt was made to run a further round robin on day two, but after two heats in up to 20 knots, the wind built to 35 knots and racing was abandoned. No racing was possible on the third and final day, so the results from the end of day one decided the event.

This was the twentieth running of this strictly amateur regatta, which is hosted by one of the friendliest yacht clubs in the world. It is in a magnificent setting on the shores of Oyster Bay, Long Island, and has a splendid history of hosting international events.

Past winners of this event include the Royal Bermuda Yacht Club, Sint Maarten Yacht Club and teams from Cowes made up of members of the Royal Yacht Squadron and Daring class sailors. -- John Roberson

The 45th BVI Spring Regatta & Sailing Festival has officially opened its online registration, which will be held March 28- April 3, 2016.

To celebrate the regatta’s milestone anniversary, organizers will reward one crew (registered by Dec. 31), with free drink tickets in the amount of the regatta registration fee.

Warm Water, Hot Racing And Cool Parties capture the essence of the event. On the water, sailors compete in idyllic conditions with windward/ leeward courses and use the stunning islands to race around as well. On land, they are treated to nightly entertainment with dancing on the beach and delicious food vendors all in one location: Nanny Cay Resort and Marina. As part of the anniversary celebrations, fireworks will bring the 2016 regatta to a close after the award ceremony.

The VX One Class has already confirmed 12 boats will be here for their inaugural VX One Caribbean Cup Racing on the One Design Course area. Bare boats and competitive spinnaker race boats have their own course area on the water.

For more information about the BVI Spring Regatta & Sailing Festival or to register, visit: www.bvispringregatta.org

Pre-Notice Of Race Posted For 2016 ORC Worlds
Copenhagen, Denmark: The Royal Danish YC (KDY), the Egaa Yacht Club (ES) and the Offshore Racing Congress (ORC) are pleased to announce the posting of the pre-Notice of Race for the 2016 ORC World Championship, to be held over 15-23 July 2016 in Tuborg Harbor, Copenhagen.

The document outlines the rules of the regatta, the CDL rating limits of the three classes competing at the event, the fee schedule for entries in each class, the preliminary schedule of events, general information about Tuborg Harbor, and the trophies and prizes awarded at the event.

Racing will start on Monday 18 July, and for now 7 inshore up-and-down races are scheduled together with a Coastal Race and a Long Offshore Race. Race areas for the inshore races will be North and East of Tuborg Harbour with a maximum of 1 hours sailing to reach the race areas. The Coastal race will take place in Oresund and will have rounding marks in Danish as well as Swedish waters. The long offshore race will take competitors up into the Kattegat with several rounding marks.

The wooden boat was unearthed in clay but returned to the water to stop it drying out.

Dr Paul Wilkinson of Swat Archaeology was contacted by the boatyard owners who believed they'd discovered an Anglo Saxon boat.

However, Dr Wilkinson revealed that the boat dates from the Bronze Age and is "rare as hen's teeth".

Only half the craft, that's survived around 1,700 years in the Kent clay, has been discovered so far.

Dr Wilkinson and his team will be investigating the site to find the missing part of the boat.

Help For A Fellow Sailor: Campbell Rivers
On Sunday evening, September 27, 2015, after the J/70 North American Championship in San Diego, a San Francisco area sailor, Campbell Rivers, was in a Point Loma bar parking lot and was run over by a drunk driver. The driver was in a borrowed 1993 Jeep Grand Cherokee.

Campbell's injuries that he sustained was a left knee injury and 5 breaks to his pelvis bone. He is still in the hospital in San Diego recovering from 2 surgeries.

While Campbell is not the type that relies on help from others, he does not have medical insurance so rehab and recovery costs are going to be extreme.

At the moment, doctors are estimating that he will be in a wheel chair for 4 months, then a walker. It looks like it will be at least a year before we can see him on the race course with us again.

Campbell works as a pro sailor and also works on boats so his ability to earn a living has been taken away by a drunk driver.

With myself being his teammate at the regatta and being with him at the time of the accident, I have received an overwhelming amount of inquires of how people can help. As of right now the best support is financial as we need to transport him back home to San Francisco and help him get set up with a support system to help him to a full recovery.

We hope he will recover quickly and get him back on the water living his dream. -- Jeff Thorpe

The Last Word
Bad officials are elected by good citizens who do not vote. -- George Jean Nathan