Cherry departed Nice on Sunday in company with 21 other skippers at the start of the final offshore race in this year's event that takes them 420nm to Barcelona via Menorca. After that there are two further inshore races before the final ranking is set.

After his strong performances in the early inshore races and the first offshore contest, a top-half finish in the leg to Barcelona could see Cherry hold onto his podium position, going into the final two races.

The 420nm race is estimated to take two days and 10 hours to complete, seeing the Generali Solo Mediterranee fleet arrive in Barcelona on Wednesday.

No other British sailor has ever finished the Generali in the top-three.

Groovin' On A Sunday Afternoon
John Demourkas won the 2015 Rolex Farr 40 World Championship by one point over defending champion Alex Roepers on Plenty. Demourkas, the second-longest member of the class with 11 years of helming the one-design Farr 40 under his belt, has never before finished on the podium at the world championship.

Finishes of 7-4-3 put him fourth overall in the 17-boat international fleet on the opening day of the series; Demourkas then won the first race on day two, and, with finishes of 5-3, moved up to second overall. Scores of 5-6-4 on the third day of racing kept Demourkas in position, but he was tied on 38 points with Roepers who held the top spot in the overall standings to start the final day of the series.

Going into the final race, the match race between Plenty and Struntje light became inconsequential as John Demourkas sailed clean past both of them. It was an incredible reversal of fortunes that took even Groovederci's owner by surprise.

For the defending champions on Plenty, the loss stung. "We don't like losing and we let this one slip away," said tactician Terry Hutchinson, while adding that six months from now they would be right back at it.

Following on from Ocean Safety's tremendous success in supplying equipment to performance maxi yachts, the company is delighted to introduce a new range of SOLAS liferafts, which are fully compliant with industry regulations.

Racing yachts like the ground breaking Comanche, now the fastest racing monohull in the world, which has been blasting her way around the UK and European regattas this summer, is fully equipped with an inventory of Ocean Safety products from Ultralights to lifejackets and man overboard systems. So have the magnificent J Class yachts - Lionheart sports her man overboard Jonbuoy on her aft deck, but for others, including the J Class Velsheda, which has also excelled on the race circuit this year, Ocean Safety has supplied both racing equipment and products to meet the commercial code of practice.

Ocean Safety's products are globally established amongst the world's top racing yachts whether for cruising, racing or charter. Product development boasts a unique combination of efficiency and all-important functionality that fulfils the needs of the world's great sailing yachts.

Why Shouldn't The Irish Be A Seafaring People?
We may be an island nation, but are we a maritime people in our outlook and way of life? It could be reasonably argued that we most definitely aren't. On last night's Seascapes, the maritime programme on RTE Radio 1, Afloat.ie's W M Nixon put forward a theory as to why this should be so.

Why aren't we Irish one of the world's great seafaring people? After all, we live on one of the most clearly defined islands on the planet. And it's an island which is strategically located on international sea trading routes, set in the midst of a potentially fish-rich sea. Our coastline, meanwhile, is well blessed with natural havens, many of which are in turn conveniently connected to our hinterland by fine rivers which, in any truly boat-minded society, would naturally form an integrated national waterborne transport system.

Yet the traditional perception of us is as farmers, cattle traders and horse breeders of world standard, while the more modern view would include our growing expertise in information technology and an undoubted talent for high-powered activity in the international aviation industry. Then too, there is our long-established standing in the world of letters and communication and the media generally. Yet although there are now encouraging signs of a healthier attitude towards seafaring and maritime matters, particularly in the Cork region, for most Irish people the thought of a career in the global seafaring and marine industry simply doesn't come up for consideration at all.

The event concluded Sunday, September 27 after three days of racing on Narragansett Bay and Rhode Island Sound. The crew aboard Courageous won four of eight races in Modern Division (for yachts built from 1967-1983) and never finished worse than second. Victory '83, with defending champion and past 12 Metre World Champion Dennis Williams' (Hobe Sound, Fla.) at the helm, was runner-up in Modern Division.

Courageous, which last won the North Americans in 2010, successfully defended the America's Cup for the USA in 1974 with the late Ted Hood at the helm. Three years later, Ted Turner steered her to another successful defense of the America's Cup.

Gunther Buerman (Newport, R.I.), defending champion in the Grand Prix class (for yachts built from 1983-1987), steered KZ-3 to win all of its races against Kip Curren (Newport, R.I.), who skippered KZ-5/Laura.

Onboard Cameramen Planned For 2017 Regatta In San Francisco
Sports producer and avid sailor Geoff Mason plans to use onboard cameramen as part of the coverage of the Super 12 Cup regatta on San Francisco Bay beginning in July 2017.

Onboard reporters have sailed in the last three editions of the grueling Volvo Ocean Race. But it's believed onboard cameramen for the Super 12 Cup would be a first for a major race around buoys.

"That is what is going to define our coverage and set us apart from any other regatta. That's the most exciting element of this whole adventure," Mason said by phone.

The race also will feature a new, modernized version of the venerable 12-meter class.

Mason said he's not the first producer who thought about putting cameramen on boats. He wanted to do it in past America's Cups but couldn't get organizers to agree to it.

Finnteam - A New Concept In Sailing

FINNTEAM is an Olympic sailing team like you have never seen before.

ONE TEAM, ONE DREAM. The concept is simple: create a team of sailors from around the world who are in need of coaching and funding to develop skills and train together, and then source the funding that allows each of them to succeed and achieve their goals - and reach the Olympic podium.

A crowdfunding campaign has been started on GoFundMe.com to launch the FINNTEAM on their route to the Olympic podium. Naming sponsors and other supporters are also being sought.

FINNTEAM has been launched with five sailors who are members of the most elite, focused, dedicated and diverse team of sailing athletes the world has ever seen. They are Alejandro Foglia (URU), Facundo Olezza (ARG), Luke Miller (USA), Oisin Mcclelland (IRL) and Santiago Falasca (ARG). Sailors from other nations are expected to be joining the FINNTEAM in the near future.

For these sailors to achieve their goals as part of the FINNTEAM we need your support. To find out how please go to www.gofundme.com/finnteam or finnclass.org/team

ONE TEAM, ONE DREAM - Join us for the journey of a lifetime. 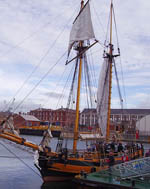 HMS Pickle will glide into her new home in Hull Marina on the river Humber, escorted by a guard from the Royal Navy.

HMS Pickle, a replica of the ship that brought news to the UK of Admiral Horatio Nelson's victory at the Battle of Trafalgar, has been recently restored.

Her owner, Mr Mal Nicholson, purchased the schooner in 2014 and has sailed her back to the UK from Gibraltar.

Patrol vessel HMS Explorer will escort HMS Pickle along the river where she's due to arrive this afternoon. She left from Great Yarmouth in Norfolk last night.

HMS Pickle was at the Battle of Trafalgar in 1805 but did not take part due to her small size. She was later wrecked in 1808.

Pickle Night is still a big event in the Navy's calendar, celebrated each year on November 6.

2015 RORC Transatlantic Race: A Fascinating Duel
A highly varied fleet with fascinating competitors will set off on 28th November from Lanzarote - the most eastern island in the Canary Islands chain - bound for the island of Grenada in the Caribbean in the RORC Transatlantic Race, organised by The Royal Ocean Racing Club in association with The International Maxi Association.

Two MOD 70s will be locking horns in the 2015 RORC Transatlantic Race, aiming for line honours and victory in a highly competitive, high-speed duel: Lloyd Thornburg's Phaedo^3 and Tony Lawson's Concise 10, skippered by Ned Collier Wakefield are capable of a top speed in excess of 40 knots and an average 25 knots for the race. Two of the world's fastest multihulls could complete the 3000 nautical mile course in just five days.

The two MOD 70s have raced each other twice. Concise 10 got the better of Phaedo3 in the Artemis Challenge, around the Isle of Wight Race and Phaedo3 squared the match, beating Concise 10 in the Rolex Fastnet Race. The RORC Transatlantic Race will be the first transoceanic race between two fully crewed MOD 70s for over three years.

"There is no difference in speed between the two boats and it will come down to tactics and navigation," explains Brian Thompson. "The MOD 70 is the best boat in the world; super-fast, very strong and reasonably safe offshore. In terms of navigation, once we leave Lanzarote we will have to negotiate the Canary Islands which will be an interesting conundrum before heading towards Grenada. Then it is principally a downwind course, although at this time of year, there is the choice of going north to hook into a cold front or going south to find the trade winds.

During the race, squalls are always a big factor and this is a very open race course, so we could be hundreds of miles apart, but we will be watching each other and I think this will be a really close race. The last few hours could be very interesting. Which side of Barbados to go will be in the mix and we could see some double bluffing going on. It is quite rare to have this opportunity and a big thank you to the RORC for organising the race. We are very glad to be supporting it and the RORC Transatlantic Race is the perfect way to arrive for the RORC Caribbean 600." -- Louis Habib

My local pub "closes" at 11.00pm but isn't all locked up and deserted by 11.10pm! The punters are still there enjoying themselves !!

New Jason Ker designed lightweight racer built to perform on a budget. 5 boats now sold worldwide and showing to be hugely competitive under IRC and ORC as you would expect from this design team. A package that really surpasses expectations within this price package.

The Last Word
It is a shame when nonsense can substitute for fact with impunity. -- Lawrence Krauss