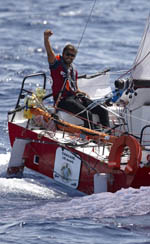 Little by little, the pontoon reserved for the Mini Transat iles de Guadeloupe fills up. The prototypes have taken up most of the spaces, with only two series boats arriving into port so far.

Although quarter of the fleet had arrived in Lanzarote, the battle was still fierce amongst those in the series boats for the best finishing positions (and this was the majority of sailors still at sea)

For all the competitors, these are the last hours at sea, the blessed hours, according to the conversations that some have been able to have with the National marine patrol boat, the PSP Flamant. When he was barely in sight of the coast of the Canaries, Armand de Jacquelot said that he couldn't wait to take off again on the second stage on 31st October.

Interest is building as the early entry discount deadline approaches for the 2016 edition of Quantum Key West Race Week, organized by the Storm Trysail Club. Nearly 80 entries hailing from 10 countries have already signed up and taken advantage of the $4/foot discount on entry fees that expires soon on Thursday, October 1st.

The non-one design entries will compete in classes using IRC, ORC Club or PHRF Multihull handicaps. One class that is new and starting to gain some interest is the Performance Cruising class, which is offering casual racing on navigational courses set around the island. Starts and finishes will be close the harbor, with one race per day lasting about 2-3 hours.

Complete version of the Notice of Race: issuu.com/glpubs/docs/qkwrw2016_nor

And for more information and to enter the 41st annual Lauderdale-Key West Race, visit www.keywestrace.org 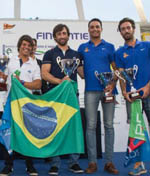 Brazilians Mateus Tavares and Gustavo Carvalho (Yate Clube de Bahia) are the 2015 Snipe World Champions with 51 points having managed to close the gap with Louis Soubie-Diego Lipszyc (ARG), who had led the standings for the entire week and finish second at 59 points.

Third on the podium, Alvaro Martinez-Gabriel Utrera (ESP) at 61 points.

The final race, Race 8, was sailed with a westerly breeze between 7 and 9 knots that later in the day shifted to the left.

Seahorse Sailor Of The Month 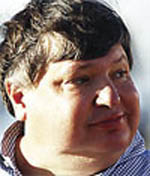 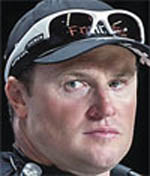 Glenn Ashby (AUS/NZL) Or Captain Many Titles as they should surely start calling Ashby, in a month when he secured his ninth A-Class world championship win and skippered Emirates Team New Zealand to its first success in the Louis Vuitton AC World Series. The whole of Team NZ will have been deservedly buoyed up by success in Sweden; and an Aussie skipper of a Kiwi sports' team... that Glenn Ashby really must be good 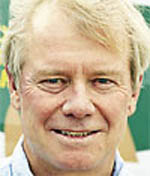 Gery Trentesaux (FRA) A sterling reminder of just how good the French have always been at offshore racing and of what strong supporters they have always been of RORC's offshore programme in particular; examples of French crews crossing the Channel for race starts and sailing home after the finish are legion. Trentesaux has dominated the RORC programme this year and a well-earned Fastnet race win was appropriate icing for the cake

Clipper Race: Lmax Exchange Wins Race To Rio
First to cross the finish line in the Atlantic Trade Winds Race to Rio was LMAX Exchange at 1718 UTC yesterday, having led the Clipper Race fleet for most of the first leg from London.

Among the rest of the fleet, teams continue to jostle for position as the remaining places are not so clear cut. IchorCoal has commenced its Ocean Sprint where it is hoping to make up time on Unicef and Da Nang - Viet Nam, who respectively lie 111 and 113 nautical miles ahead with only 2 nautical miles separating the two teams. IchorCoal Skipper Darren Ladd says: "At our midday meeting we had a chat about the Ocean Sprint and how hard we wanted to go for it. Almost unanimously everyone was keen. The chance for two extra points is worth the slight detour from the rhumb line route.

As of 0900 UTC, Visit Seattle still holds the fastest time set for the Ocean Sprint. Clipper Telemed+ and PSP Logistics have also completed the Ocean Sprint but could not match the American entry.

At the front of the fleet, weather conditions will make for interesting changes to the arrival times into Rio, as we saw yesterday with LMAX Exchange, which found itself in such light winds 20 nautical miles short of the race finish that it looked like it might be delayed for hours, before managing to find enough wind to power it across the line.

With light winds and a 2:00pm deadline for the final race start, Smith only had two races to shorten Doug Strebel's 15-point lead. Winds blew at an average of 6-8kts over the racing venue, set up just offshore from Coronado beach.

Going into the final race of the regatta, a two-point spread separated Smith in 1st from Strebel in 2nd. Since competitors were not eligible for any throw-out scores, every race counted towards the final showdown.

The final race of the regatta was a 5-leg course with an upwind finish, whose original start was temporarily postponed to allow for consistent breezes to fill in.

Cruisers Abducted From Ocean View Resort Marina, Samal Island
Noonsite has now received an accurate statement about what happened on the night of 21st September from cruiser Luc Callebaut of SY Slopemouche who is currently berthed in the Ocean View Marina.

At about 2320 on Monday night, 21 Sep 2015, the marina and boat yard here on Samal Island, Davao, Philippines, was attacked by a group of about ten armed and as yet unidentified men, apparently intent on taking four hostages.

It was a difficult situation with two cruisers hurt and others badly frightened by the altercations on the docks.

It appeared from the CCTV camera footage that after landing on the NE corner of the outer breakwater in two local boats, the group of armed men split up and spread out into the facility including the two marina docks. Two cruisers that were still awake were taken from each dock. Two other cruisers that resisted were hurt, not seriously, but were not taken.

The four cruisers abducted were Canadian John Ridsdel of the catamaran Aziza, Canadian Robert Hall and his partner of the yacht Renova, and Norwegian Kjartan Sekkingstad of yacht Wiskun.

The panel, as well as architects, ship builders, measurers and racers who attended the forum all agreed that the IRC Rule had become difficult to understand, considering its growing complexity and the increase in international regulations which interfere with national rules. By introducing new measures such as the Endorsed certificate to guarantee equity, the IRC Rule has become less flexible and so complex that it is perceived as an elitist rating rule. Its international scope covering some forty countries mean that implementing changes is time consuming, although rule users do recognise that the IRC Rule safeguards the value of their boats, that it is fair and suitable for high-level racing, which is different to it being elitist.

The report is available (in French) at uncl.com

Greg O'brien
Greg O'Brien, product and marketing manager at Crewsaver, passed away on Sunday, September 13 after a battle with cancer.

The Crewsaver website describes O'Brien as "a man with boundless enthusiasm for the industry and a person who made things happen when they otherwise wouldn't have". He was also highly valuable and influential in the strategic management of Crewsaver's day-to-day business.

"Greg was a highly driven employee who always gave 100% to the company, his colleagues, and the customers he worked with," says Ross Wilkinson, MD of Crewsaver's parent company Survitec.

"Greg had a genuine passion and love of the industry, he brought with him a heap of new product ideas to help and support the company's growth and development. He was an inspiration to all who worked with him. His enduring enthusiasm and infectious optimism will be greatly missed by all at Crewsaver."

Crewsaver manufactures marine safety equipment and clothing for the commercial and leisure marine industries. The company is based in Gosport, Hampshire.

Not Sailing But Very Cool...
How to say "My hovercraft is full of eels" in dozens of languages, not just the original Hungarian.

It's possibly the most useful phrase there is, and a handy one to have when you're asked to say something in a language you're learning.

* From David Lewin: Further to Christopher Neil Brown's comment about Southampton Boat Show, I'm not surprised that the entire Jeanneau stand was closed at 1840 - the Show closed at 1830! However it must be appreciated that the weather for most of the week was appalling but most people I talked to spoke of meeting interested and interesting people and we on the Hudson Wight stand did good steady business all week.

The Last Word
Science is meaningless because it gives no answer to our question, the only question important for us: 'what shall we do and how shall we live' -- Leo Tolstoy