Mini Transat Iles De Guadeloupe: Leaders Pass Cap Finistere
As often happens, the Gulf of Gascony has made its choices through testing the resolve and spirit of the sailors. While the leaders continue to skip along quickly and to burn up the miles in their boats, those behind are suffering.

Cap Finistere is already a long way in the past for Davy Beaudart, who continues to dominate the fleet of Minis with the rounded bow of his Maitre Bau. Frederic Denis (Nautipark) is trailing behind by 27 miles, and there are 5 who are vying for third place just three miles behind him.

In the series boats, Ian Lipinski (Entreprises Innovantes) is still in the sights of Tanguy Le Turquais (Terreal), BenoIt Hantzperg (YCA Dhumeaux Secours Populaire) and Julien Pulve (Novintiss). 5th place sees the return of the Belgian sailor, Jonas Gerckens (Netwerk) who has made a staggering recovery over the last 40 hours, rising up through 34 places.

Farr 40 Pre-Worlds
There could not have been better conditions for the opening day of the Farr 40 Pre-Worlds Regatta. A steady westerly of 10-14 knots provided the fifteen competitors with sufficient indication of what to expect in the forthcoming World Championship.

Almost naturally, the first attempt to get the fleet away was spoiled by the impatience of the sailors, and a general recall was necessary. That, however, didn't stop the top Corinthian skipper, Rick Goebel, from jumping the gun the next time and his sixth place finish with Insanity was lost. That was only one of his disappointments of the day as Rick had been forced to leave a ring-side seat at the Singapore Formula 1 Grand Prix to attend this regatta.

Goebel's later performances in the races would, perhaps, afford some compensation as he, together with tactician Greg Tawaststjerna, posted a 57 second victory in the second race and a sixth place in the final race of the day, which gave him eighth overall - which would otherwise have been third if his first race position could have counted. He was, nevertheless, the top Corinthian skipper at the end of the first day.

Top place for the day went to Alex Roepers' Plenty, who scored two second places and a fourth.

However, the wind gods of Garda had other ideas and regardless of the heat the north wind continued to prevail.

After a short delay Race 10 was started in 7 knots of north breeze. Former World Champion Richard Stenhouse pulled off a text book port end start crossing the fleet and leading the fleet to the left.

At the finish of the race it was Marco Anessi (ITA) winning from Alex Knight (GBR) and Alex Griel (SUI).

With the 4pm deadline passed race 10 was the final race of the regatta; 10 of the 12 races were completed in a range of conditions.

Congratulations to both Team Azzurra and SLED for winning the 2015 TP 52 Super Series and the 2015 TP 52 owner-driver class respectively. Team Azzurra took the top prize with 175 points after five regattas and 46 races this year in the Super Series. In the owner-drive class, SLED claimed victory ahead of Platoon and Bronenosec, who all finished within an incredible 4 points of one another. 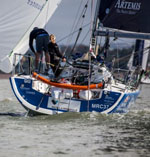 Organised by the Royal Southampton YC, in conjunction with the Royal Ocean Racing Club, the second edition of the IRC Double Handed National Championship took place in the Solent, last weekend. 37 teams took part racing in three IRC Classes, lack of wind on the Saturday was the undoing of the passage race but two excellent races were held on the first day in the Central Solent.

The largest class racing at the IRC Double Handed National Championship had 15 yachts vying for the class and five yachts took podium positions. Strait Dealer, crewed by Graham Sunderland. Jin Tonic's was the class champion by a single point from Jagerbomb with Strait Dealer taking third on countback from Jelly Baby.

Congratulations to Paul Dunstan and crew Tony Wrath, winners of Race One and runners up in Race Two, winning their class for the IRC Double Handed National Championship, racing Folkboat, Mandarin. Chris Charlesworth's Contessa 26 Meow, crewed by Martin Young, scored a third and a bullet to finish runner up by just a point. Dave Wright's H-Boat, Hubble Bubble crewed by Luke Bradley was third just a point ahead of David & Peter Cowell's Hanse 291, Seahorse.

The third edition of the IRC Double Handed National Championship will be organised by the Royal Southampton YC, in conjunction with the Royal Ocean Racing Club, held in the Solent in 2016, late summer or early autumn. -- Louay Habib

Andrea Mura Forced To Sell Brand New IMOCA 60
Sad news comes to us from Giuliano Luzzatto... the new IMOCA 60 that just passed its righting tests and arrived in Lorient in August has been sold. Mura was unable to obtain sponsorship for the Transat Jacques Vabre and the Vendee Globe.

Because the boat does not have a name yet definitive, since the dialogue with potential sponsors are still being finalized. Even the region of Sardinia, which has recently given willingness to consider a form of "support", has not withdrawn its reservations.

The IMOCA 60 - arrived in Lorient - will be equipped with the mast, a complex structure of 30 meters in height. Here it will also the "testing" of the boat.

The stated goal of Andrea Mura participation in the Transat Jacques Vabre transatlantic race starting from Le Havre on October 25 and finish in Itajai, southern Brazil, which follows the old "Coffee ROute" for a total of 5,400 miles. The regatta is an important project of the skipper because it is valid as qualification for the Vendee Globe.

"We have designed and developed a sports program for four years - said Mura - with the major races on the international circuit and especially with the Vendee Globe, the only sailing event can reach tens of millions of users on the web and traditional media with a coverage comparable to the World Cup. We believe it is an historic opportunity, and only to companies and institutions to reach a global audience. "

The RYA has held a special reception to celebrate the continued support of those who have held RYA membership for 50 years or more at the Southampton Boat Show.

In the first event of its kind, of the 177 members who have held RYA membership for 50 years or more, 45 made the trip to the show for the reception. Guests enjoyed an afternoon tea and mingled with members of RYA staff including RYA CEO Sarah Treseder and Chairman Stacey Clark.

Stacey Clark, RYA Chairman, said: "What an amazing group of people with some incredible stories to tell. Having done the calculations between them they have over 2,500 years-worth of membership!"

"It is with the continued support of members such as these that the association has been able to be so successful and to grow over the years."

A number of special presentations where also made by RYA CEO Sarah Treseder including to Cliff Norbury, the longest serving member at the event with some 66 years of continuous membership.

Each of the members were presented with a specially designed 50 year membership pin and certificate to mark the special occasion.

Anyone who was unable to attend the event will be sent their pin and certificate in the coming weeks. www.boatingbusiness.com 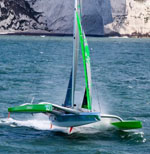 After achieving two world records last week, Phaedo3 screeched out of the Solent bound for Dinard, Brittany just before 9am on Tuesday 22nd September. A mere 4 hours, 49 minutes and 51 seconds later Lloyd Thornburg and his crew, heavily reefed, and in large seas crossed the line off Dinard smashing the record set by Lending Club 2 this April. Not only did the crew of Phaedo3 beat the larger multihull's record, but they did it by over 25 minutes (still to be ratified by the WSSRC).

At a very rough finish line off the Northern Brittany coast, Lloyd Thornburg reported that their average speed on this course was 28.7 knots. They also recorded a top speed of 40.9 knots.

Nathan Outteridge Steps In For Leigh Mcmillan
Australian Olympic champion Nathan Outteridge has stepped in as Sultanate of Oman skipper to keep alive Oman Sail's hopes of winning the inaugural Bullitt GC32 Racing Tour championship at Marseille One Design, the final event of 2015, next week.

A clash of fixtures in the international sailing calendar has the final GC32 event of 2015 running concurrently with the Extreme Sailing Series' Act 6 in Istanbul leaving Oman Sail, and in particular their talented multihull skipper Leigh McMillan, a crew short to maintain title winning habits.

Outteridge, who will have Iain Percy, Iain Jensen, Kalle Torlen, and Luke Parkinson alongside to support his first GC32 experience is looking forward to the event.

Racing in Marseille One Design, held at one of France's top sailing venues on the Rade Sud between the city's famous Prado beach and the off-lying Frioul Islands, kicks off on Wednesday 30 September with the final race scheduled for four days later on Saturday 3 October.

History Of Yachting Live at the Royal Southern Yacht Club's Regatta
Photo by Vicki Weston. Click on image to enlarge.

100 years of development on show

A weekend of brilliant late summer weather for the Royal Southern Yacht Club's September Regatta went a long way to salvaging a sailing season ravaged by wind and rain - it also presented a snapshot of where the sport of yachting is today in the UK. Two of the J-Boat classes (J/111 & J/80) were settling their national championships while four classic 6-Metres, some J/70's, a sportsboat handicap class and a handful of XODs meant that over 100 years of design development was on display.

Add to that the diversity of yachts in the IRC divisions with Sir Keith Mills' 'Invictus' as highest rater in the 'Fast40' class and Jonty Sherwill's 1926 vintage 'Cockleshell' the lowest in class 4, a span of over 25 minutes per hour separating them across the five classes.

The contrast in speed was brought into sharp focus in Sunday's final race. With the Fast 40's 'Rebellion' and 'Invictus' fast reaching on port tack under A-sail just a few boat lengths apart they met Cockleshell close hauled, also on port. Having cleared across the bow of Rebellion, Cockleshell's immediate tack away onto starboard avoided a potentially hazardous windward-leeward situation with Invictus and ensured this dramatic dog fight would continue unhindered to the finish line.

While the plumb bows and bowsprits of the current breed of yachts and sportsboats exemplified by the minimalist Fast 40's conjure up an aesthetic link with the equally radical but narrow raters of the mid-Victorian era it's tempting to muse on what will arrive next to satisfy the ever-present thirst for progress. Only time will tell but might it be foil borne inshore racers and if that's feasible then there must be at least one that's ready to go on some designer's drawing board! -- Jonty Sherwill

VICTOIRE is now our latest central listing and first of this new year of 2015.

She is one of the, if not the, most successful Cookson 50 ever raced. As JAZZ she was world famous for winning races from the Caribbean to Europe and then on to Australia. Her current owner purchased her in 2012 and kept right on winning with overall wins in the 2013 Sydney to Hobart and the Gosford to Lord Howe race. Also just recently 2nd in class ( behind a sistership) in IRC 0 for the 2014 Hobart race. Full safety gear, new sails in 2014, updated navigation area, VICTOIRE is ready to keep on going and has an owner who is serious about selling her.

The Last Word
It's often better to read first-rate science fiction than second-rate science - it's far more stimulating, and perhaps no more likely to be wrong. -- Martin Rees