With a strong northeasterly wind that pumped much more than what the forecast originally called for, the goal for many teams was to remain in the hunt and keep fighting for another day.

More hot and clear weather is in the forecast for Day Two. There is the potential for two conflicting breezes in the morning so it will be an interesting call for Reggio to send the fleet to the North or South course. Two additional races are scheduled with a one o'clock start (Italy time). 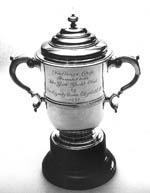 Newport, RI, USA: The Queen's Cup was first contested in 1953 on Rhode Island Sound, just over a year after Queen Elizabeth II assumed the throne of England following the death of her father George VI. It was scheduled during the New York Yacht Club's Annual Cruise - as had been the case with the King's Cup - so only yachts skippered by members of the Club competed. Gilbert Verney's 67-foot yawl Sea Lion was the first boat to finish the 16.6-mile course, and the winner on handicap as well.

The Queen's Cup has remained a part of the Annual Cruise ever since. Only in 1966, when John B. Kilroy's Kialoa II, representing the St. Francis Yacht Club in San Francisco, was invited to compete for the Queen's Cup, has a non-member won the sturdy double-handed trophy.

This September 20, however, the race will be sailed as a stand-alone event off Newport, R.I.; and the Club is inviting to compete any boat that meets qualifications for entry, which include an IRC rating of 1.07 or greater and an ISAF Category 1 helmsman.

Unlike many modern regattas, the Queen's Cup is just one race; usually a lengthy windward-leeward affair. It also features a unique starting procedure. Provided a yacht starts within two minutes of the starting gun, her elapsed time starts the moment she crosses the line.

Winning the start, normally a crucial part of any sailboat race, isn't nearly as important.

The Queen's Cup start is scheduled for 1300 EST on September 20, with the racing to be held on Rhode Island Sound or inside Narragansett Bay. 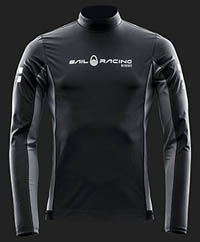 The Sail Racing Hybrid range in the 50 KTS Race Edtion is a number of garments in technical and light weight fabrics with high breathability, specially developed for high-pulse speed sailing athletes.

The new Sail Racing 50 KTS collection will be used by Oracle Team USA as they defend the America's Cup in Bermuda during 2017 and during all Louis Vuitton America's Cup World Series 2015/2016.

The 50 KTS Race Edition products are availabe at Sail Racing Club House in Stockholm and online at www.sailracing.com

This is being done in response to interest expressed by a number of owners and charterers of high performance boats with amateur helmsmen and mostly-amateur crews. One example is the U.S. Naval Academy's TP52, Constellation, which sails primarily with a crew of midshipmen.

A.J. Evans, 2016 Race Chairman, explained, "We are making a slight change to the St. David's Lighthouse Division description to accommodate a surge in interest from boats with amateur helmsmen and mostly-amateur crews. These boats would have been assigned to the Gibbs Hill Division in 2014 due only to their Performance Screen value.

In anticipation of these and other entries, the 2016 race will also include a special competition for the highest performance boats in the fleet across the St. David's, Gibbs Hill, and Open Divisions."

For the first time, and also in celebration of the 50th Thrash to the Onion Patch, yachts in the professional Gibbs Hill Division or amateur St. David's Lighthouse Division with a Performance Screen of 0.50 or higher will have the option to enter the Open Division in addition to their Lighthouse Division.

Jono Macbeth Looks Ahead To Gothenburg
Following on from the team's win in Portsmouth, Land Rover BAR are heading to the next Louis Vuitton America's Cup World Series event in Gothenburg. Racing takes places on Saturday 29th and Sunday 30th August, with two races scheduled each day and double points on the table for Super Sunday. We caught up with Land Rover BAR Sailing Team Manager and three-times America's Cup winner, Jonathan 'Jono' Macbeth on how the team plan to follow up on their success.

What sort of conditions do you think the team will face in Gothenburg?

I think Gothenburg could throw up a little bit of everything. Traditionally it looks like it's quite a light wind venue, but in the daily forecasts that we have been looking at so far there might be a mix of conditions. It can be anywhere from 7 - 20 knots, sometimes you can get nothing, on the flip side I have been racing there and experienced quite a lot of wind. So we're gearing up for everything.

How do you see the series developing?

When we started this series, I didn't think there would be one team that dominated, the fleet is just so strong. It is going to come down to the sailors minimising mistakes. If you look at the way the races developed in Portsmouth there were big gains and losses on the race course throughout the build up and during the weekend. But at the end of the day it was the same principals of yachting racing that won or lost races, good tactics can win you the race, poor boat handling could lose you the race. The other thing that was quite evident is that you can never give up. Just when you thought someone was dead and buried, they would come ripping through and be at the front of the fleet again.

Multihull Seminar
Thinking about going long distance cruising on a multihull? Or, having a lot of fun on more than one hull sailing closer to home? Multihulls Quarterly Magazine is pleased to invite you to attend a half-day seminar at the Annapolis Boat Show.

It's amazing to think how sailing has changed since Dubarry started making boots in 1937. The first marina arrived in the 1930s but there were no plastic boats to park in it before the 1940s. There was no yacht radar before the 1950s, nor auxiliary diesel engines before the 1960s, also when polyester sailcloth ousted linen and cotton. The 1970s brought instrumentation and the 1980s saw Decca come and go as GPS stole the show. Oiled canvas gave way to PVC, which yielded to GORE-TEX. Much indeed has changed, yet one thing has stayed the same: nothing signifies a confident, experienced, discerning yachtie like a pair of Dubarry boots.

Developed as a more luxurious, classical and traditional interpretation of the legendary Shamrock, on which the company's reputation was built, the Ultima is Dubarry's flagship boot. Its sole delivers award-winning, sure-footed grip. Its GORE-TEX liner is waterproof and breathable to keep you warm, dry and comfortable. Its Dry-Fast-Dry-Soft water-resistant leather weathers with grace and distinction, recording every nautical mile of your experience in the gentle, tanned folds of its sumptuous hide. It's clearer than ever that, though times may change, quality always lasts.

RNLI's All-Weather Lifeboat Centre Opens
The new £24million, purpose-built facility at the charity's headquarters in Poole will enable the production, maintenance and refit of the all-weather lifeboat fleet under one roof for the first time in the organisation's 191-year history.

The new facility, which covers a floor space of 5,000 square metres, has taken more than two years to build, will provide 90 new jobs and save the RNLI an estimated £3million a year.

Hundreds of people attended today's ceremony including local dignitaries, members of the public and supporters of the RNLI.

RNLI head of construction and refit Angus Watson said the existing staff from the Lymington site were 'excited' to be moving to the new purpose-built facility - bringing the total number of production employees to 150 when the site is fully operational, plus 70 other staff including the quality team and design engineers.

The new boatbuilding centre, which will allow the charity complete control over design, cost and production time, began operating in March this year.

Stellar Cast For Premier SSL Lake Grand Slam
The Star Sailors League has attracted a stellar cast of Olympic, World and European Champions to the Cercle de la Voile de Grandson, Switzerland for the first ever SSL Lake Grand Slam. Over 70 teams will be competing from 25 different countries.

From Germany, the current International Star Class World Champions, Robert Stanjeck and Frithjof Kleen will be competing. From France, the current European Champion, Xavier Rohart who has won the Star World Championships twice. From Brazil, Torben Grael and Marcelo Ferreira, who have won nine Olympic medals between them, including four Gold. From the USA, Mark Mendelblatt and Brian Fatih, winners of the 2014 Star Sailors League Final and Mark Reynolds winner of two Olympic Gold medals and two World Championships in the Star. From Poland, Mateusz Kusznierewicz and Dominik Zycki, World and European Star Champions.

Bullitt GC32 Racing Tour Moves On To Rome
Foiling one design catamaran racing comes to Mediterranean Italy for the first time Thursday with the fourth event of the Bullitt GC32 Racing Tour, Trofeo di Roma, being held out Civitavecchia, some 50km northwest of the Italian capital. Here at this favourite seaside resort for Romans, the GC32s are berthed within the shadow of the harbour's imposing Michaelangelo Fortress.

Four days of racing at the Bullitt GC32 Racing Tour's Italian venue kicks off at 11:30 CET. As usual the aim is to hold six races each day on America's Cup-style courses. These feature reaching starts and finishes, allowing the foiling catamarans to get up to maximum speed, with crews able to show off their tactical and boat handling skills on the windward-leeward legs in between.

Five GC32 teams are competing in Civitavecchia. Coming into the circuit on a high following its victory at the Bullitt GC32 Sailing Cup Kiel is Team Alinghi of two time America's Cup winner Ernesto Bertarelli.

Sultanate of Oman may be leading the 2015 Bullitt GC32 Racing Tour, but after winning the Austria Cup in May, results have been trending the wrong way for Leigh McMillan's team, which finished third in Kiel.

2015 World Sailor Of The Year Nominations
The ISAF Rolex World Sailor of the Year Awards are the most prestigious awards of recognition in the sport of sailing. There are two categories - male and female - and sailors nominated may represent any discipline of the sport.

A sailor (or crew) nominated for the 2015 Award must have performed an "outstanding achievement in the sport of sailing between 1 September 2014 and 31 August 2015". Nominations must be received by ISAF no later than 19.00 UTC on 2 September 2015.

The winners will be announced on Tuesday 10 November 2015 at the Awards Presentation and dinner in Sanya, China.

The Last Word
You can always count on Americans to do the right thing - after they've tried everything else. -- Winston Churchill