Gery Trentesaux's JPK 10.80 Courrier du Leon from France has been confirmed as the overall winner of the 2015 Rolex Fastnet Race joining a long list of great names to have won this legendary 603-nautical mile offshore race.

Courrier du Leon  becomes the sixth French yacht to win the Rolex Fastnet (following Pen Duick III in 1967, Mordicus in 1981, Whirlpool-Europe 2 in 1999, Iromiguy in 2005 and Night and Day in 2013) and continues a recent trend of French dominance at the race. In 2013, eight of the ten boats on IRC handicap hailed from France, in 2015 the figure currently stands at seven of the top ten. It is the third French victory in the past six editions.

"Foggy, foggy, typical British summer time," joked Trentesaux after crossing the finishing line in the Plymouth drizzle and mist on Thursday morning after 3 days, 22 hours and 32 minutes at sea. After establishing themselves as leader on IRC handicap, Courrier du Leon had to wait until Friday morning to discover if any of their rivals still on the course where able to register a faster corrected time. Alas, their efforts were futile.

Trentesaux claims victory in his 13th Rolex Fastnet Race some 38 years after his first on a Nicholson 51 in 1977.

Monohull line honours was claimed by American Jim Clark's 100-ft Maxi Comanche, arriving in Plymouth on Wednesday morning in an elapsed time of 2 days, 15 hours, 42 minutes and 26 seconds. A time which was 21 hours off the existing race record but a proud achievement considering the level of competition she faced from the fleet's other Maxi yachts and notably George David's 88-ft Rambler which finished a mere four minutes behind.

A complete review of the 2015 Rolex Fastnet Race will be published on Monday 24 August. -- Trish Jenkins

IMOCA Masters: First Points On The Board For PRB
Celebrating its 90th birthday this year, the Royal Ocean Racing Club's biennial Rolex Fastnet Race from Cowes to Plymouth via the Fastnet Rock, had 356 entries, having attracted the largest and fastest multihulls and monohulls from around the world to small family cruisers. It provided an ideal platform to launch the new IMOCA Ocean Masters World Championship.

Among the nine doublehanded IMOCA Ocean Masters teams, for several the race represented their competitive debut in the IMOCA 60 class. There were a few familiar boats being campaigned by new owners, such as Yann Elies's Queguiner - Leucemie Espoir (ex-Safran) or the ex-MACIF, winner of both the last Vendee Globe and the 2013 Rolex Fastnet Race, now Paul Meilhat's SMA. Then there were Le Souffle Du Nord (ex-Groupe Bel), with Mini Transat and Route du Rhum winner Thomas Ruyant at the helm, Comme Un Seul Homme (ex-DCNS) skippered by Eric Bellion and Kilcullen Voyager (formerly Mike Golding's Gamesa) sailed by Ireland's Enda O'Coineen.

But all eyes were on the two new generation boats - Morgan Lagraviere's Safran and Armel le Cleac'h's Banque Populaire, both boats featuring radical side foils, designed to turbocharge their performance.

Eventually PRB speeded into Plymouth finishing at 12:19:53 on Wednesday in an elapsed time of 3 days 9 minutes and 53 seconds.

A hugely enthusiastic supporter of the class, David Cullen was a popular winner and magnanimous in his victory, thanking his crew, his fellow competitors, the members and volunteers of the  Koninklijke Yacht Club Nieuwpoort and Race Officer Paul Charlier for an outstanding regatta.

The prize for the leading Production Boat was won by Crakajax, an X95 built in 1985.

The Half Ton True Spirit Trophy is awarded to the boat that, in the opinion of the judging committee, truly personifies the spirit of the class in that season. For their never ending enthusiasm, their commitment to their beautiful boat and their determination to throw themselves into every Half Ton event wholeheartedly, this year's recipients of the True Spirit Trophy are Jean-Luc Courbon, Jean Marty, Richard Carlie, Pierre-Yves Danet, Helen Frouin, Paul de la Renardiere and Louison Le Scouarnec of the 1988 Andreiu designed Half Capone - named after the famous American gangster who also inspires the crews crew uniform.

Round the world racing teams have chosen Dubarry's Crosshaven in every edition of the race since the boot was developed with Green Dragon in 2008. There are several reasons for that. First, the innovation that impressed the Green Dragon guys most: the integral gaiter. Made of lightweight, hard-wearing, water-resistant fabric and cinched up with a drawstring, this gaiter means you can kneel down and work on the foredeck without suffering the dreaded 'bootful of green' that kills comfort for the rest of the passage.

And when you're dodging icebergs in the Southern Ocean as freezing winds snap at your vitals, you'll appreciate the 350g GORE-TEX Duratherm membrane and thermally insulated footbed that will keep your feet, at least, toasty.

Then there's the award-winning grip of Crosshaven's non-slip and non-marking sole. If you're trying to stay vertical on deck, and several tonnes of water traveling at 30 knots is trying to persuade you that you might be more comfortable lying down, you need your feet to stay planted. 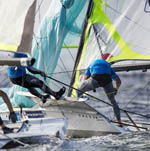 One year before the Olympic Sailing Competition the sailors showed their mettle on the race tracks that will be used at Rio 2016. Many of the test event medallists will win an Olympic medal in one year's time, highlighting the importance of sailing's test event.

Connecticut-based David Storrs and his Pequot Racing team of Taylor Canfield, Andy Escourt, and Hayden Goodrick have won the ISAF Grade 2 Chicago Match Cup Grand Slam. Storrs and team were undefeated today, beating Chris Steele and his 36 Below Racing team from New Zealand, the top-ranked team at the event, on a definitive score of 3-0 in the Finals, after also defeating CMRC's Don Wilson 3-0 in the Semi-Finals.

"This is the most exhilarating feeling in my life in sailing," said Storrs. "At age 71 there are not many things that can get my excited any more, but this was certainly the best sailing regatta I've ever had."

The day's breezy southerly conditions topped out at 23 knots, and after some early morning showers gave another day of perfect conditions for the eight teams on the water today to finish the first-to-three point Quarter-Finals, the first-to-three points Semi-Finals, a knock-out Consolation series to determine 5-8th places, and the Finals and Petit-Finals. -- Dobbs Davis

* Octogenarian Hobart yachtsman Tom Kirkland today celebrated his 60th year of racing on Hobart's River Derwent by winning the final race of the Derwent Sailing Squadron/Cascade Winter Series and taking out the overall series with his little sloop Ragtime. 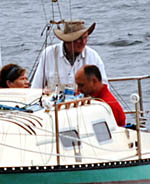 The 87-year-old retired medico, who says he has been sailing "since the cradle", won three of the four Winter Races on corrected time, placing second in the other race, to finish four points clear of his nearest rival, Graham Hall's Serenity.

In a close race today, Ragtime was third boat to finish in Division 3, but on corrected time the 7.8m sloop took the handicap honours by 23 seconds, and the silverware for the series.

In a feature article published last month in the 'Sunday Tasmanian' newspaper, Dr Kirkland recalled growing up sailing dinghies around Rushcutters Bay in Sydney's eastern suburbs, and maintaining the passion when he moved to Tasmania in the mid-1950s.

The Royal Yacht Club of Tasmania member has raced a wide variety of yachts on the Derwent over past six decades, buying Ragtime eight years ago and racing her with a small group of friends. -- Peter Campbell

Helmut Jahn Rolex Farr 40 North American Champion
Santa Barbara, California, USA: As if on cue, the scenic backdrop of the Santa Ynez Mountains  was revealed for the final day of racing at the Rolex Farr 40 North American Championship.  While the clouds cleared off to uncover the scenic vistas, the wind continued to tease the competitors and it wasn't until within minutes of the time allotment elapsing that the 10th and final race of the series got underway in six knots of breeze ultimately reaching 12 knots by the conclusion of the race.

Chicago architect Helmut Jahn, the 2012 Rolex Farr 40 World Champion, had taken over the leaderboard on the second day of the series and never relinquished it. He started the final day of the championship with 31 points and a slim three-point lead over Italy's Alberto Rossi on Enfant Terrible, while Germany's Wolfgang Schaefer, on Struntje light, was a further two points back with 36 points.

Rounding the first mark within seconds of each other, the championship was decided when Jahn was fourth across the finish line, with Rossi seventh.

America's Cup - Constructed In Country Almost Wiped In New Protocol
The latest version of the Protocol for the 35th America's Cup has been modified to effectively eliminate the fundamental requirement for the yachts to be constructed in the country of the Challenger or Defender.

In the latest edition of the Protocol, a piece of bow section, just a little bigger than Optimist, is all that is now required to be constructed in the country of the yacht club of the competitor.

The new rule requires a 2.7m piece or approximately 18% of the overall length of the 48ft wingsailed catamaran yacht to be built in the country of origin for the yacht to be eligible for the America's Cup.

Previous versions of the Protocol required the exterior surface of each Hull to be laminated in the country of the yacht club represented by the Competitor.

Constructed in Country is a fundamental of the Deed of Gift, the 19th century document which governs the conduct of the America's Cup.

It was this rule that the long-time holder of the Cup, the New York Yacht Club, used to ensure that all parts of the yacht were built in the country of Challenger, the yacht was designed in the country of the Challenger, and in the modern era of the Cup 1956-1983 all crew competing in the Match had to be nationals of the Challenger country. The rule was at the centre of the ruckus as to to who was actually the designer of the Australian Challenger Australia II.

There is unlikely to be anything other than laudatory comment by the teams on the latest round of changes to the rules governing the Protocol.

The penalty on any Team for making a comment to which America's Cup organisers might take offence is $25,000 for the first infringement, $100,000 for a second and $250,000 for a third and subsequent speaking of one's mind. -- Richard Gladwell in Sail-World.com

2004 model Figaro II. Ashore here Port Hamble, this Beneteau Figaro II is well set up and has never been seriously campaigned. She has benefitted from a refit by her current owner which included new standing and running rigging, updated electronics, new rudder bearings, installation of Webasto cabin heater and Awlgrip paint to topsides.

Exclusively for sale with Ancasta, Port Hamble this Figaro II can be viewed 7 days a week.

The Last Word
You cannot reason people out of a position that they did not reason themselves into. -- Ben Goldacre