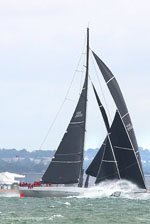 Would they, wouldn't they go racing this morning? There was anticipation as winds and sea state were still looking strong in the morning, following yesterday's cancellation at the Royal Yacht Squadron's Bicentenary International Regatta. But the call was made and racing was on, and it turned out to be a good decision.

On a breezy start line where early gusts of 30 knots were still being recorded, the starters powered the Royal Yacht Squadron line on a downwind start with startling acceleration.

Despite Bella Mente's immense speeds at the start, Rambler overshadowed the entire fleet off the line with even greater speed powering through the entire fleet in seconds, to take the lead on the water in the first leg eastwards beyond the two forts which marks the entrance to the eastern Solent. Rambler made mincemeat of the 22 mile course which took in seven turning marks, and was back on her Cowes mooring just one and a half hours after the start.

In contrast to the speeds on the grand prix race track a more sedate race, but only relatively speaking, was experienced by IRC Class 3's pedigree classic yachts. "It was not too windy for us," said Argyll's captain Alexis Bordessoule, who sails with owner Griff Rhys Jones on board the immaculate 57' Sparkman and Stephens yawl which was launched in 1948. "We were rolling a bit downwind as were most of the others around us, but we set our asymetric kite to get us down to the forts and managed to stretch a lead on the water, as well as winning overall, which we are very pleased about."

Another classic Mikado from IRC Class 4 described the experience as 'very wet'. Owner Michael Briggs commented "This is about the roughest race we have ever done, but we had a great time. There were some challenges along the way, we got a lot of dirty air at the start, and had to avoid Kelpie while we watched Whooper, the eventual winner, getting quickly away. We saw some great competition". Whooper's win was no surprise. This year's Round the Island Race champion is expertly handled by her crew and owner Giovanni Belgrano who restored the 1939-built yacht in 2001 and has been winning on the race circuit ever since.

The small fast boats were having a particularly wet time. "On the first run we were doing 20 knots under water!" said Andy Greenwood, boat captain of Rebellion a high performance Carkeek 40.

First, Rossi and his Enfant Terrible team surrendered the International Circuit title, finishing as runner-up to skipper Alex Roepers and Plenty by 45 points. Then, the Italian team was dethroned as Rolex Farr 40 World Champions, finishing third in San Francisco behind Plenty and Estate Master.

Rossi and crew put considerable effort into improving the deficiencies that had prevented Enfant Terrible from achieving its goals. A revamped sail inventory along with some tuning tweaks to the rig were among many changes the Italians made in hopes of improvement.

Rossi and Enfant Terrible have rebounded from last year's disappointment with a vengeance, blitzing the competition in every event on the 2015 International Circuit so far. Rossi led Enfant Terrible to its third straight regatta victory on Saturday, winning the Cal Cup in impressive fashion.

Enfant Terrible won the opening race and never looked back in posting a low score of 22 points, 17 better than runner-up Flash Gordon 6. Vasco Vascotto served as tactician for Rossi, who wound up winning four races and placing second in five others. Enfant Terrible's lowest results in the 11-race series were a pair of fourths.

It’s been said of Ireland that it’s a lovely country, just needs a roof. True, we get more than our fair share of rain from the storms that barrel in from the North Atlantic, but it’s not so bad - it’s not for nothing that we’re known as the Emerald Isle.

In this part of the world we’re also well used to making our living on the sea, in the sturdy Galway Hookers built by hand with traditional tools by local boatbuilders. These bluff-bowed gaff cutters have plied their treacherous trade on the often vengeful waters of the Bay for over 200 years. If ever there was a place where folk would appreciate a quality traditional sea boot - and had the craftsmanship to make one - it’s here.

So it’s here, in the town of Ballinasloe, a stone’s throw from the Shannon and just inland of Galway Bay, that Dubarry started making boots in 1937. We’ve honed our traditional boot-making virtuosity, found sources of the finest quick-drying, long-lasting leathers, and perfected the technology behind a warm, waterproof classic boot with award-winning grip. What else could we call the world’s best traditional sea boot, other than Ultima?

It has taken 18 months for Roscommon boatbuilder Jimmy Furey and Cathy MacAleavey to craft Irish oak and elm, Canadian spruce and Honduran mahogany into Wag No 45, and for the next week the fittingly named Mariposa - Spanish for butterfly - will take pride of place at the RDS National Crafts Awards Exhibition.

Wag No. 45 has been named Mariposa (Spanish for butterfly) and will be launched during the annual Waterwag Club Shannon regatta which will be held this year at Lecarrow on Blackbrink Bay, Lough Ree on September 19th next. In 2016, Mariposa will join the growing number of Waterwags being raced in Dun Laoghaire.

The 100–year–old class is one of the most active dinghy classes racing in Dun Laoghaire, regularly attracting 20 and 30–boat fleets. Last month, another brand new boat, No.46 was launched and sailed at Dun Laoghaire.

Mariposa has a keel and gunwales made of oak sourced in the Earl of Meath's Kilruddery Estate in Bray, sitka spruce planking from British Columbia, a transom, thwarts and centre board casing in Honduran mahogany provided by Milosky's of Kenilworth, Dublin and knees made from elm supplied by Mick Dunne of Clonmore sawmills in Tullamore, all secured together with copper nails and rooves.

SSL Lake Grand Slam
Over 50 crews have registered for the first ever Star Sailors League Lake Grand Slam that will take place from September 8th to 13th in Grandson, Switzerland.

Needless to say that this event will surely propose of the strongest fleet sailing has ever seen and that the last 10 spots on the last day of racing will be incredibly tough to secure. To understand SSL Racing Format check it out on the event website.

Foggy Frers
I have been in Edgartown for the past two days racing onboard Foggy, a brand new Frers 75′. Foggy is not just a racing boat but more like a work of art. She has a number of artistic touches, not common to racing boats, that have been added by famed architect Frank Gehry.

Foggy is wood inside and out, over a carbon core. She has skylights and port lights that are composed of hundreds of small pieces arranged in interesting shapes. Through these hundreds of small glass pieces, light is let in a very animated way. The light seems to dance or swim around inside the boat.

On the racing side, we have had 6 races, all conducted in very light winds. This hasn't favored our 70000 pound beauty. We have a great group of sailors onboard assembled by Eric Arndt who has spent the past 8 months up in Brooklin, Maine putting Foggy together. The Brooklin boat builders are amazing craftsmen. Foggy is a fine piece of art. -- Paul Cayard

Designed primarily for use as a fast daysailer, the Frers 74 measures 73 feet 9 inches overall, with a beam of 18 feet 10 inches. Foggy's 18,959-pound bulb keel draws 12 feet 5 inches suspended from a carbon-fiber structure built at the Front Street Shipyard in Belfast. With empty tanks and no provisions, the boat's displacement is calculated to be 54,454 pounds.

And that's just the start.

The boat's deep red mast and boom were built of carbon fiber by Hall Spars. The standing rigging is also carbon. At 108 feet in length, the mast is the longest by several feet of any ever stepped at BBY.

The triple-spreader rig will fly a working sail plan of about 1,016 square feet. The initial sail inventory has been built by North Sails.

Don't Miss Out On 29er Worlds!

This is the last week to register to sail against the best youth skiff sailors! The regatta, set for 8-14 August in Pwllheli, Wales, GBR, has attracted sailors from every continent and 23 nations with 190 teams signed up so far for the 29er Worlds.

Skiff sailors are packing in their time-on-the-water by following the circuit of the 29er Europeans, 29er British Nationals and culminating at the 29er Worlds with many using this as training for the ISAF Youth Worlds later this year.

Don't miss this opportunity to sail against the best!

www.29erworlds.org or www.29er.org for more information about the 29er Class.

Harry Price Wins All-Australian Final At Governor's Cup Youth Match Racing
Harry Price, Angus Williams and Tara Blanc-Ramos, from the Cruising Yacht Club of Australia on the east side of Australia, defeated Lachy Gilmour, from Royal Freshwater Bay Yacht Club from Western Australia in a battle of the Aussies.

This was the last year BYC will use the Gov Cup 21 boats that were designed and used for this purpose since 2003. The designer, Alan Andrews, has designed a new and improved Gov Cup 22. Alan, a long-time member of Balboa Yacht Club, has designed many high performance racing and cruising yachts. The new boats are on order and will be ready for the 50th Annual Gov Cup in 2016.

Williams Looking To Fend Off The Marauding Pack In Poland
Reigning ISAF World Champion Ian Williams starts as favourite for the Energa Sopot Match Race, the fourth World Championship Event and Polish leg of the World Match Racing Tour (WMRT) which starts on Wednesday this week.

Although he holds a small points advantage at the half way stage of the 2015 Tour season, the British skipper of GAC Pindar knows there are plenty of teams looking to steal his thunder, not least arch-rival Taylor Canfield and US One, the Tour champions of 2013.

"We're going to have to be on our toes in Sopot," says Williams, recalling the tricky conditions on Poland's Baltic coast line last summer when temperatures hit 30 degrees. "We had four light air days then it all changed for the finals with some big breeze. Hopefully this year we'll be ready for whatever gets thrown our way."

The event takes place in 34ft Danish-built Diamant 3000 keelboats, an IOR-type design from the early 1990's with long overhangs, a relatively small cockpit and running backstays.

This Comet 45 was built for the current Owner in 2008. The boat is in excellent condition and well equipped. Carbon Mast, Teak Deck, Carbon Rudder, Harken Winches and deck gear, etc. Many racing sails, some of them hardly used. Two spinnaker poles.

Great boat for racing and for crusising.

The Last Word
Life's most persistent and urgent question is, 'What are you doing for others?' -- Martin Luther King, Jr.