First Start For 48th Transpac
San Pedro, California, USA: Under clear skies and in a light westerly breeze that is promising to build through the evening, the first 22 entries in Divisions 7 and 8 have started their 2225-mile race today in the 48th edition of the LA - Honolulu Transpac. This biennial ocean racing classic is organized by the Transpacific YC.

The fleet starting today was a broad mix of designs, from the 1907 sail training schooner  Martha sailed by a crew of 11 to the relatively new 30-foot Italian sportboat Fortissimo II sailed by a team of four from Japan.

After the starting gun at 1300 Pacific Daylight Time, this largest of the starting groups headed west towards the first mark of the course: the West End of Catalina Island, which must be left to their port side.

There are no other marks of the course to honor until finishing at the Diamond Head Buoy east of Waikiki on the south coast of Oahu, 2225 miles to the west.

This is one of the world's oldest and longest biennial ocean races, first sailed in 1906 from an idea inspired by Hawaii's King Kalakaua in the late 19th century. The overall winner of the race in corrected time wins the trophy named for him: the prestigious King Kalakaua Cup. In the last edition of this race in 2013 the overall winner was from Division 8: the classic S&S-designed 52-foot ketch Dorade, who repeated her first win of the same trophy in 1936.

The Fast And The Furious Reach The Lizard
A giant runway of strong southwesterly wind spanning the breadth of the North Atlantic for the last few days has allowed the grand prix boats competing in the Transatlantic Race 2015 to cover staggering mileage.

Towards the end of the race Phaedo3, at one point, recorded a peak speed of 41.2 knots when navigator Miles Seddon was driving.

Including a day and a half being becalmed, Phaedo3 crossing time of 7 days 2 hours and 4 minutes is not exceptional, but nonetheless establishes a new multihull race record, substantially faster than the previous Phaedo's time of 12 days 15 hours 42 minutes and 58 seconds set in 2011.

Likewise for Comanche, which started 14 minutes after Phaedo³, light conditions early on the race ensured the boat's crossing of 7 days 11 hours and 35 minutes was outside of Rambler 100's record time of 6 days 22 hours 8 minutes 2 seconds from the Transatlantic Race 2011. 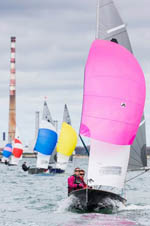 Dublin Yacht Club's shared the bulk of the overall prizes at Volvo Dun Laoghaire Regatta 2015 this afternoon, winning 22 of the 29 classes including the coveted 'Boat of the Week' Trophy.

Regatta Chairman Tim Goodbody's reminder that 'Volvo Dun Laoghaire is a fun regatta, not a championship' did little to stem the fierce competition for the coveted Volvo prizes in 29 classes as the last race of the event concluded in the lightest winds of the series.

The biennial regatta is being hailed an enormous success both afloat and ashore for a combined fleet of 415 boats, the biggest on the Irish Sea. Over 250 races on five different courses were staged in a range of light to very heavy conditions since racing began last Thursday.

Although 180 visiting boats, made up nearly half the fleet, yachts from outside the bay area took away only seven trophies. The bulk of the silverware - 17 titles - have stayed on Dun Laoghaire's waterfront.

Exposure's X2 personal searchlight may look like an ordinary torch but it's not! Small enough to live in your pocket, when you pick it up it is so light it's hard to believe it has a battery in it that will last 13 hours before recharging. In a daylight shop environment it's hard to get a sense of its impressive red beam searchlight. So checkout this amazing footage from Abu Dhabi's Ocean Racing! See the power of the Exposure X2 and how you'll never damage your night vision again - or your skippers!

With three modes for red and white light, the red high beam will easily spot the tell-tales at the top of a Volvo 65 mainsail. The high beam white creates a 573 lumens searchlight with a 162m beam distance. IPX8 rated to 3m depth, the X2 has Strobe and SOS option for emergencies.

Justin Slattery trimmer on board Azzam says, "The Exposure X2 is a brilliant search light and its red beam spotlight options mean the ADOR team can keep trimming all night as if it was still daylight – and with no concerns about damaging our night vision. More X2 information and contact Ocean Safety for dealers.

Julian Fernandez Neckelmann Wins J/70 World Championship In France
Sun and wind dominated the 2015 J/70 World Championship, and the J/70 ensured the show this week in La Rochelle, France. Superb sailing conditions and fierce competition have marked the week, which ends with the victory of the Mexican team Flojito Y Cooperando (MEX 384) and its skipper Julian Fernandez Neckelmann. The crew included: Erik Brockmann, Bill Hardesty And Willem Van Waay. In the Corinthian fleet, it was the Englishman Simon LING on the Team RAF Benevolent Fund Spitfire (GBR 123) who won the amateur trophy with crew Craig Burlton, Ian Southworth and Tony Hanlon.

On Saturday, the 78 J/70s from 16 nations ran the last two rounds of the championship. With a slightly cooler temperature than Friday and a 5-10 knot wind at 300 for race 9 and 260-270 for the last race, the conditions allowed a final intense game day.

TP52 Worlds: Back In The Groove
For Brazilian TP52 Phoenix owner Eduardo de Souza Ramos the wait has been too long and frustrating but the double Olympian today finally enjoyed his return to the TP52 fleet when Phoenix took second place in the official practice race for the TP52 World Championship on the Bay of Palma, hosted by Puerto Portals.

For Brazilian TP52 Phoenix owner Eduardo de Souza Ramos the wait has been too long and frustrating but the double Olympian today finally enjoyed his return to the TP52 fleet when Phoenix took second place in the official practice race for the TP52 World Championship on the Bay of Palma, hosted by Puerto Portals.

After Phoenix's mast crashed down and broke on March 18th during the earliest stages of training, the Brazilian flagged team have had their season put on ice, waiting for a replacement rig to be manufactured and shipped to Spain. Despite the mast only arriving a matter of six days ago, the Botin Partners designed Phoenix which was launched last year, showed plenty of pace in the vanguard of the twelve boat TP52 fleet when racing in eight to 10 kts of sea breeze conditions today.

Franck Cammas And Julbo Looking For A Teammate For An Extraordinary Adventure To Cape Horn
Every year, Julbo offers one of his athletes the chance to realise a dream with a unique sporting feat. This year it is the turn of Franck Cammas.

For Julbo, the theme of this year's Sail Session was set. It will be an expedition to Cape Horn in a Nacra F20 Carbon FCS.

Julbo and Franck Cammas have decided to recruit a teammate who will win a place on this challenge on the edge the world after a contest.

The challenge that will take place in November 2015 is not a trivial one. Candidates should demonstrate a strong background in sport catamarans or dinghy sailing. Candidates are invited to post on the page https://www.julbo-eyewear.com/en/quizz/sail-session, before September, their nautical CV and a video presentation combining a face to camera interview and images of them sailing.

Franck Cammas and Julbo will select the most suitable people, who will then be invited to a training session in Lorient in September.

The Nacra F20 Carbon FCS and its support boat will sail to an anchorage near the Horn to prepare for the passage round the famous cape where the Pacific and Atlantic meet. The duo of Franck Cammas and his teammate will travel a total of nearly 100 nautical miles by flying catamaran in the freezing waters of Patagonia.

Cammas and his crew will not be content to simply round the legendary rock. Once the sporting challenge is accomplished, the human adventure will take over on foot and they will land on the rock of the Horn and go and meet the lighthouse keeper and his family.

Founded in 1888 and based in the Jura region (France), Julbo is a leading sports eyewear brand.

Mike Slade's 100ft Maxi, Leopard celebrated an emphatic destruction of the monohull record, bettering the time set by Leopard in 2008 by over two hours.

NACRA 17 Worlds
The 2015 Nacra 17 World Championship held in Aarhus, Denmark from 2-10 July was the second opportunity for nations to qualify for the Rio 2016 Olympic Sailing Competition in the Mixed Multihull.

Rio 2016 will see 20 nations on the Nacra 17 startline. Ten places were decided at the Santander 2014 ISAF Sailing World Championships with three further spots available at the 2015 Nacra 17 Worlds.

Billy Besson and Marie Riou (FRA) won gold at the Nacra 17 Worlds for the third consecutive year following a dominant performance. From nine races the French duo took six victories and a third in the Medal Race sealed the deal.

Leaders 'Give Me 5 by FFV Youth', skippered by Robin Follin, went into Race 13 on 27 points and an 11-point advantage over second-placed Roger Hudson's 'Race Ahead - Spirit of Cape Town'. Rodion Luka's Ukrainian 'Skyline' team were in third, with Robert Jeffreys and Glenn Bourke (AUS) in fourth.

The SB20 fleet enjoyed a week of stunning conditions sailing from the Circolo Vela Torbole on Lake Garda from July 4-10 and the final day provided typically spectacular conditions with the penultimate race held in a building Ora breeze, and the last in full-on downwind planing conditions.

The 'Nations Cup' prize, sponsored by Sportsboat World was won by Russia.

The Last Word
Judge a man by his questions rather than by his answers. -- Voltaire