Thierry Chabagny Wins Figaro Leg Stage
Thursday 4 June at 02h 11mn 36s, Thierry Chabagny crossed the finish line of the first stage of the 46th edition of La Solitaire du Figaro - Eric Bompard cashmere. The skipper of Gedimat took three days 9:11 minutes and 36 seconds to complete the course of 461 miles (theoretical) at an average speed of 5.68 knots. In reality, he sailed 643 miles at an average speed of 6.69 knots.

After a long and exhausting stage, starting at 11th place on day one, he climbed through the ranks. Despite the light winds and glassy seas, the skipper of Gedimat was able to hold off his opponents at the finish. This is his first stage victory in 15 editions of La Solitaire.

Team SCA (Sam Davies/GBR), Dongfeng Race Team (Charles Caudrelier/FRA) and MAPFRE (Iker Martínez/ESP) all admitted sailing the wrong way in Traffic Separation Schemes (TSS) and were each penalised a point to be added to their overall total in this low-scoring event.

Additionally, Team SCA were given an additional penalty point for sailing into an exclusion zone (see Noticeboard for full details of all infringements).

The Chinese-backed team are now level on 22 points with Team Brunel (Bouwe Bekking/NED) - the Dutch crew officially ranked second because of their superior record in the in-port series, which breaks ties.

MAPFRE drop back to 27 points, level with Team Alvimedica (Charlie Enright/USA), but the Turkish/American team move up to fourth courtesy of their better in-port record.

Fastnet Bundle - Check It Out

Check out the following HW products using the code 'FASTNET' and make a saving of £150 per order:

Your branding requirements are also safe in our hands and we would be delighted to quote when we receive your order. Just email: or phone: +44 (0)1983 300144.

If you're ever in the market to try something new and innovative on the clothing front, your first port of call should be Hudson Wight - check out our excellent prices either online www.hudsonwight.com or pop into our showroom at One The Parade, Cowes.

This year the New York Yacht Club Annual Regatta falls between two world-class distance races - the Annapolis to Newport Race and the Transatlantic Race 2015 - and is attracting competitors from both events. On that list is New York Yacht Club Commodore Rives Potts (Westbrook, Conn.) who will be taking on the full triumvirate of races with Carina, his 48' custom McCurdy & Rhodes sloop. Built in 1969 to traditional lines, Carina continually reminds that her beneath-the-skin racing character is more beast than beauty. She has sailed the classic Newport Bermuda Race 21 times, more than any other boat, and with Potts at the helm, has won that race's Holy Grail, the St. David's Lighthouse Trophy, twice (2010, '12).

The 19-mile circumnavigation of Conanicut Island takes place on the Friday before the Annual Regatta's weekend buoy races and takes competitors under the magnificent spans of both the Jamestown and Pell Bridges.

At the other end of the spectrum, PHRF boats and Mutihulls that want a more relaxing race experience can compete in the Navigator Division, which sails one race per day around government marks. 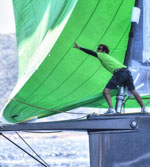 Blue skies, warm sun, and the sparkling emerald waters of the Costa Smeralda greeted the fleet of sailing superyachts on the first day of the 2015 Loro Piana Superyacht Regatta.

This year, the entry list is as diverse as ever, with yachts ranging from the 24 metre Oyster 825 Maegan - racing for the first time - and the Spirit Yachts modern classic Gaia, to the giants that include the 50 metre Fitzroy-built Ohana and the 55 metre Vitters ketch Marie.

Early fears of a windless day were allayed when the race committee reported 5 to 6 knots of breeze in their chosen starting area by the island of Bresci, and with a custom course that would send the fleet up and back through 'bomb alley' - the passage between the mainland and the island of La Maddelena - the day was set for a real tactical battle in challenging conditions.

Racing resumes on Thursday with the warning signal for the first start scheduled for 1200 local time.

International Six Metre Worlds
La Trinite Sur Mer, France - Having spent day two ashore because of strong winds, day three of the International Six Metre World Championship in La Trinite initially also looked to be in doubt, but this time for lack of wind. The forecast promised little more than four knots all day, but the race committee held out hope of a sea breeze and sent the fleet afloat on time to await developments on the racecourse.

At the appointed hour of 10.55 there was a light and briefly stable gradient breeze that lasted just long enough for the committee to set up a course and get the Open Division into sequence. Sadly as the seconds ticked down towards the start the wind shut off again so the AP was hoisted and a long wait began.

Fortunately that wait was eventually rewarded with a glorious afternoon of sailing in a westerly sea breeze of 7-10 knots that allowed the race committee to complete three windward leeward races, races four to six of the eight race series. Racing was cutthroat and with the discard now introduced there were shake-ups in both Open and Classic divisions. Going into the final day the points are so close that all the podium places remain to be decided.

It's been said of Ireland that it's a lovely country, just needs a roof. True, we get more than our fair share of rain from the storms that barrel in from the North Atlantic, but it's not so bad - it's not for nothing that we're known as the Emerald Isle.

In this part of the world we're also well used to making our living on the sea, in the sturdy Galway Hookers built by hand with traditional tools by local boatbuilders. These bluff-bowed gaff cutters have plied their treacherous trade on the often vengeful waters of the Bay for over 200 years. If ever there was a place where folk would appreciate a quality traditional sea boot - and had the craftsmanship to make one - it's here.

So it's here, in the town of Ballinasloe, a stone's throw from the Shannon and just inland of Galway Bay, that Dubarry started making boots in 1937. We've honed our traditional boot-making virtuosity, found sources of the finest quick-drying, long-lasting leathers, and perfected the technology behind a warm, waterproof classic boot with award-winning grip. What else could we call the world's best traditional sea boot, other than Ultima?

You can follow LIVE commentary and state of the art computer animation from Virtual Eye:
starsailors.com/starsailors/home.html

Star sailors flying the flags of 15 different countries will be competing for the 2015 International Star Class European Championship in Gaeta, Italy. Including the defending European champion Hubert Merkelbach (GER).

Hetman Cup 2015 The First Ever ISAF Grade 4 Match Race To Be Held In Ukraine
Marina Kyiv, Ukraine: Marina Kyiv recently played host to the first ever Grade 4 match race regatta in the Ukraine on 9-10 May 2015.

Five local teams from the Ukraine and one from Great Britain took part in the Hetman Cup 2015 under the watchful eye of race officer Olympian Radion Luka.

The new event followed a two day workshop to give the sailors an insight into the match race rules. When racing got underway Boris Shvets (UKR) took the inaugural Hetman Cup title followed by Konstantin Datsenko of Ukraine into second and Chris Taylor of Great Britain taking third.

The Ukraine Sailing Federation was pleased with the first ever ISAF graded match race regatta held in Ukraine and has ambitions of elevating the regatta to grade 2 in time for next year's event. -- Neven Baran (as amended by ISAF)

Maritime Collection From Port Of Cork Opens At Bantry House
Bantry Bay Port Company is delighted to announce that the Port of Cork Maritime Collection, an exhibition of maritime themed paintings and models is now open at Bantry House, West Cork. The exhibition, which will run until 28th June, will showcase a selection of the Port's historic maritime art pieces dating back from the 1800s. Highlights of the collection include a number of paintings by marine artist George Mounsey Wheatley Atkinson and Robert Lowe Stopford who is known for his series of panoramic views of Queenstown.

This exhibition offers the public a chance to view this one of a kind collection of paintings which is usually housed in the Port's headquarters in Custom House. In 2005 the Port of Cork hosted an exhibition of maritime art dating back to the 1700s which drew hundreds of visitors from far and wide.

In 2010, paintings also went on loan to Dachau museum for an exhibition which formed part of a year-long commemoration of the life and works of renowned Cork composer and conductor Aloys Fleischmann. In April 2012 the paintings went on loan to Belfast Port to form part of their 'Kings of the Tides' exhibition and in June of that year, the Sirius Arts Centre in Cobh hosted a month long exhibition of the collection.

Bantry House is situated in the town of Bantry, overlooking Bantry Bay.

Finn Silver Cup In Valencia
Entries are coming in fast for the 2015 Finn Silver Cup, which this year is being hosted by the Real Club Nautico Valencia from June 28 to July 5. It will be a unique event for many reasons, but also a great opportunity for the Finn class youth to experience excellent sailing conditions and top class training and racing.

As well as the Silver Cup, the Real Club Nautico Valencia is organising a training regatta from June 25-27, immediately before the Junior Worlds, and this is open to everyone. There will also be a Rule 42 Clinic organised by the Finn Class and run by some of ISAF's top judges. This really is a unique opportunity for training, development and competition for both Junior sailors and senior sailors.

Valencia is also, of course, the home of Luca Devoti's Dinghy Academy, a training base for Finn sailors from all over the world, many of whom will join in the training regatta to provide a top class learning environment for the young sailors.

There is a reason why Valencia was chosen for two America's Cups and the same reason drove Luca Devoti to establish the Dinghy Academy there. The weather is pleasant and very reliable. Wind is virtually always guaranteed, with sailing possible 98 per cent of the time. In the summer sea breezes of 15-18 knots are regular, and it is generally warmer than other places in Europe due to the local geography.

Unique opportunity to purchase an ENTIRE FLEET of Swedish Match Race yachts to add to an existing fleet or just to start up a new venture. Call for full details.