Although the protest did not directly involve the Hungarian crew they still had to wait for a jury decision, and a possible reopening, over an incident in race 6 involving Brazil, Argentina and Canada. The result was a disqualification for Canada that confirmed Hungary as champions for the second time, their first coming just two years ago in the 2013 edition.

The final standings showed the strong competition from every continent with six different nations filling the top six spots with Hungary, Canada, Austria, Germany, Ukraine and Brazil in first to sixth respectively.

Xabi Back At The Helm As MAPFRE Skipper For Leg 8
Xabi Fernandez was tonight confirmed as MAPFRE's skipper for Leg 8 from Lisbon to Lorient when the Spanish team revealed their crew for the 647-nautical mile stage which starts on Sunday.

Xabi will step in for his fellow 2004 Olympic gold medallist, Iker Martinez, who is fulfilling pre-race commitments to train with the Nacra 17 class for the Rio 2016 Games.

It will be the fourth time Xabi has stepped in for his long-time sailing partner after taking charge for the third, fourth and sixth legs.

MAPFRE won the fourth stage from Sanya to Auckland under Xabi's guidance.

Although he will not be sailing the leg, Iker has confirmed he will be contesting the Lisbon In-Port Race.

After taking a breather for the seventh leg, Rafa Trujillo (ESP) returns to the MAPFRE crew for the stage to France, expected to be completed after around three days of sailing on Wednesday, June 10.

Three garment layers combine to provide optimum comfort and protection. The beauty of the three layer system is that you can mix and match to suit conditions. The outer shell provides perfect protection on its own as a lightweight jacket, or use the waterproof mid layer as your outer when you don't need full protection, and choose whether to add your thermal base layer depending on the ambient temperature.

An individual wearing an Elite Offshore 3 layer system would be carrying the equivalent of a 1Kg bag of sugar less, so fatigue is lessened and performance enhanced.

The Lightest, Most Breathable Offshore Gear Ever, Without Compromise. www.henrilloyd.com/elite

Weymouth and Portland, the fourth of six ISAF Sailing World Cup regattas in 2015, will welcome sailors across ten Olympic and three Paralympic events in Great Britain from 8-14 June 2015.

ISAF Sailing World Cup glory, a share of the €78,000 prize fund and Abu Dhabi final spots are on offer with racing commencing on 10 June culminating in the live Medal Races on Sunday 14 June.

The world's top 30 sailors from the 27 April 2015 ISAF World Sailing Rankings release were invited to Weymouth and Portland with the remaining receiving their spot at the qualification event, the Delta Lloyd Regatta in Medemblik, the Netherlands.

Racing at ISAF Sailing World Cup Weymouth and Portland commences on Wednesday 10 June. Medal Races on Sunday 14 June will bring the regatta to a close.

Results will be available here www.sailing.org/worldcup/results/index.php

Saint-Tropez acts as the focal point for the weeklong sailing contest. This chic harbour town, famed for its artistic roots born during the emergence of the Fauvist movement in the early 20th century, welcomes the fleet following a short, overnight race from Sanremo (starting on Friday, 12 June).

Saint-Tropez then plays host to three days of inshore competition (from Sunday 14 - Tuesday 16 June) before the eye-catching start of the main event, the famous 243-nm offshore race (commencing Wednesday 17 June) to Genoa via the Giraglia rock.

Almost certain to lead the fleet en route to race organizer Yacht Club Italiano's homebase in Genoa is Igor Simcic's Esimit Europa 2. The 100-ft Maxi has dominated the recent history of the offshore race winning line honours at the four editions she has entered. In 2012, Esimit set a new race record, finishing in just under 15 hours to smash the previous record by over three hours - only the sixth time the race record has been broken since the famous photo finish which marked the inaugural race in 1953 (EA of Italy and Amity of France crossing the finish line at the same time).

Despite Esimit's strong pedigree at the event, a closer contest for line honours is forecast. Sir Lindsay Owen-Jones's Magic Carpet 3 should present a tough adversary. In 2013 and in her debut offshore race, Owen-Jones's Wally Cento claimed line honours in Genoa. The opportunity to see these the two boats in direct competition for the first time is an intriguing one.

Superyacht Spectrum At Loro Piana Superyacht Regatta
A fleet of superyachts showcasing the cream of nautical design and engineering has gathered in Porto Cervo for the seventh edition of the Loro Piana Superyacht Regatta. The event, organized by the Yacht Club Costa Smeralda in collaboration with Boat International Media and with the support of title sponsor Loro Piana, is taking place from 2nd to 6th June with racing scheduled daily from tomorrow, 3rd June.

Ranging from the classic lines of the 55-metre Marie, winner of the Caribbean edition of the event held in March this year, to the ultra-modern racer-cruiser WinWin launched in 2014 from the Baltic shipyard, the fleet will be divided into three categories with separate starts and scoring for each. All divisions will be racing under the new ORCSy rating rule introduced at the Loro Piana Caribbean Superyacht Regatta & Rendezvous earlier in 2015. The largest vessels, those of 45 metres and above, will be grouped together, as will the many of the performance yachts while the "smaller" yachts - small being a relative concept in this context - will be competing in their own division.

The fleet is a mix of regatta regulars such as the 46-metre Ganesha, fresh from victory in last week's Dubois Cup at the Yacht Club Costa Smeralda, and first-time competitors including the newly-launched Maegan, an Oyster 825 making her regatta debut in Porto Cervo.

Volvo Ocean Race teams have chosen Dubarry’s Crosshaven in every edition of the race since the boot was developed with Green Dragon in the 2008 edition. There are several reasons for that.

First, the innovation that impressed the Green Dragon guys most: the integral gaiter. Made of lightweight, hard-wearing, water-resistant fabric and cinched up with a drawstring, this gaiter means you can kneel down and work on the foredeck without suffering the dreaded ‘bootful of green’ that kills comfort for the rest of the passage.

And when you’re dodging icebergs in the Southern Ocean as winter’s teeth snap at your vitals, you’ll appreciate the 350g GORE-TEX® Duratherm membrane and thermally insulated footbed that will keep your feet, at least, toasty.

Then there’s the award-winning grip of Crosshaven’s non-slip and non-marking sole. If you’re trying to stay vertical on deck, and several tonnes of water traveling at 30 knots is trying to persuade you that you might be more comfortable lying down, you need your feet to stay planted.

"We've known each other for ten years," Lagraviere says. "At that time, we were part of the same crew on the Tour de France Sailing Race, we were the two young guys on board. We carried on rubbing shoulders on the Figaro circuit." Beyond their obviously good relationship, Lagraviere chose Lunven because he brings real added value to the project. Experienced offshore, an expert in weather and strategy, Lunven also has a profile that is complementary to Lagraviere's. "We have different ways of doing things and different characters," Lagraviere says. "I rely a lot on feeling while Nicolas is more logical; I'm wild, he's cool, calm and collected."

A talented Figaro sailor, winner of the prestigious Solitaire in 2009 and 3rd in 2012, Lunven has crossed the Atlantic several times in a Figaro. Good at everything, he has much experience on many boats, including internationally (Sydney-Hobart, Volvo Ocean Race). Therefore, this new challenge in the IMOCA was met only with enthusiasm.

WMRT Executive Director James Pleasance: "What we aim to provide on WMRT is a platform for professional sailors to earn a living [this year WMRT will provide over $1.4m prize money across all events] as well as a gateway for up and coming sailors to compete at the highest level. You only have to look at the former World Match Racing Tour Champions since 2000 to see where it has taken them. And judging by the early results this year, it's obvious we are going to see many more new skippers on the Tour this year." 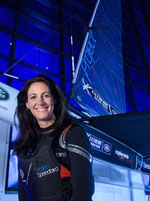 Extreme Sailing Series commentator, Hannah White, today launched her bid to become the fastest woman on water over one nautical mile when she unveiled her latest venture; Project Speedbird. In a purpose built, state of the art boat, Speedbird, Hannah will be attempting to break the women's speed record over one nautical mile while also becoming the first woman to ever set that record above the 40 knot barrier (equivalent to 46mph).

With Speedbird on display at the Science Museum in central London from 26-28 May 2015, Hannah and her team have been giving people the opportunity to see the boat first hand and find out more about the technology behind it.

Speedbird has been designed and built by project engineer Dave Chisholm.

After the event at the Science Museum, Hannah will be attempting to make the first crossing of the English Channel in a Moth setting off from Cap de Gris, France to Folkestone, England in early June (depending on weather conditions). Hannah's sailing background is in endurance sailing at sea and learning to sail a high-speed Moth has meant that she has had to learn a whole new set of skills. No-one has attempted to cross the Channel in a Moth before.

Hannah and her team will be exhibiting Speedbird in Cardiff at the Extreme Sailing Series presented by Land Rover from 19-21 June 2015.

The Push To Restore Paralympic Sailing To Tokyo 2020
Following the decision of the International Paralympic Committee (IPC), made on 3 February 2015, not to include sailing on the Tokyo 2020 Paralympic Games sports programme, the International Sailing Federation (ISAF) with the support of the National Sailing Organisations have been working tirelessly to reinstate sailing at the earliest opportunity. Yachting Australia (YA) has been fully supportive of the ISAF initiatives.

Paralympic class sailing is included in the ISAF Sailing World Cup and ISAF has introduced prize money and broadcast coverage to ensure alignment with the Olympic disciplines and to promote disabled sailing.

On the back of formally taking over the management of Disabled sailing, ISAF has made the decision to press the International Paralympic Committee (IPC) to add Disabled Sailing to the Tokyo 2020 Paralympic Games - a decision which Yachting Australia and its Australian Sailing Team strongly support.

SPOOKIE FOR SALE!
For immediate release, Steve & Heidi Benjamin's Carkeek HP 40 SPOOKIE is for sale! One of the worlds fastest and most successful 40' racing yachts is now available for immediate purchase.

The complete turnkey and race proven package ready to race and win in every way.

The Last Word
The most tragic thing in the world is a man of genius who is not a man of honor. -- George Bernard Shaw