Monnin, an experienced lake racer and Tour Card skipper for the 2015/16 season, posted a swift 3-0 score-line over fellow Tour Card Skipper Joachim Aschenbrenner from Denmark. The disappointed Dane, keen to put early points on the World Championship leader board from this event, was unable to shake off Monnin and his experienced Team SailBox who earlier today also posted a straight 3-0 score-line in the Quarter Finals against Mark Lees, GBR.

In the second semi-finals, 22yr old Matt Jerwood from Australia, competing in his first World Match Racing Tour event, won his first two races against event favourite Basic. Jerwood needed just one more race to secure their place in the finals. But Basic was not going quietly levelling the score at 2-2, with a 'winner take all' race for the final.

Following a boat pair swap requested by Jerwood, both teams built good pace off the startline with Basic to windward as they headed towards the harbour pier. Basic waited until the last moment to tack just metres from the pier, forcing Jerwood to tack second and trail Basic to the top mark. As Basic pulled away downwind, Jerwood was unable to close the gap and Basic led to the finish securing his place against Monnin in the Final.

Monnin and Basic will meet in the Finals of the 18th edition of Match Race Germany starting Monday with light wind conditions forecast.

From the biggest and most competitive fleet yet, Niklas Zennstrom and the Ran Racing team won the first regatta title of the 2015 Super Series when they kept their focus under the weight of final day pressure.

With Zennstrom steering and tactician Morgan Larson and strategist Adam Beashel they achieved the required balance between proactive attack and consolidation to convert this morning's six points margin to finish ahead of rivals Alegre, Andy Soriano's series debutants.

Valencia's Malvarrosa Beach race course delivered perfect conditions for the super Saturday showdown, one light seabreeze contest in 6-8kts and a breezier finale in 14-16kts to complete a maximum possible complement of 11 races.

Sorcha, a 2011 Botin designed TP52 is available for charter for UK based events during the summer of 2015. If you are interested in this opportunity for either inshore or RORC channel races, please do not hesitate to contact us.

Sailing Participation
We've read a lot lately about saving sailing, increasing regatta fleets, getting more participation and increasing yacht club sailing programs. I've heard from major players in the marine world and NMMA about how participation in sailing and boating in general is way down from the peaks it achieved years ago.

Of course, it's down. Sailing and boating are interests that use discretionary income. In a recession, discretionary spending is the first item that gets cut. My experience going back over forty years of professional boat design and writing about boats is that Wall Street should incorporate sailing and boating into their stock prediction models because marine businesses turn down about six months before Wall Street and all its tycoons realize we are entering a recession. It takes about nine months to a year after a recession ends for consumers to have enough faith in the economy to start spending on sailing and boating again.

How do we counter this trend? Obviously, we cannot counter discretionary spending issues in a recession but we can be creating future sailors and boaters. How?

1. First, catch 'em young. Get young people involved in sailing and boating before age ten. My sons sailed as soon as they were old enough to go afloat and both now own their own boats, both have sailed in major regattas and enjoy being afloat. Keep kids sailing beyond college by taking them on board keel boats. The Storm Trysail Club has pioneered this initiative. Making it national would be a big step forward...

Already interest in future ORC Sportboat Championships is strong: representatives from Portodimare, Italy were attending this event as observers in anticipation to create their own bid to host the 2016 championship. Pending approval from ORC, they invited all to Chiaggio to race next year.

141 yachts crossed the start line for the 2015 Myth of Malham Race, the largest RORC fleet to set sail since the 2013 Rolex Fastnet Race. A light gradient breeze from the north of just 5 knots was enhanced by a developing sea breeze causing erratic wind speed for the starters.

32 yachts are taking part in the 229 mile race Two Handed.

Three hours into the race, former RORC Commodore Mike Greville, racing his Ker 39, Erivale III, was the top performer leading the race overall. Mike Greville has a fine record for the Myth of Malham, winning the race outright in 2008. The battle for Line Honours is developing into a fascinating encounter between Piet Vroon's Dutch Ker 51, Tonnerre 4 and British IMOCA 60, Artemis Ocean Racing, skippered by Mikey Ferguson.

IRC Three had a highly competitive start, resulting in several yachts having to restart with some minor collisions as the 48 yachts tussled for the line.

In IRC Two, RORC Admiral, Andrew McIrvine's British First 40, La Reponse, got away to a flying start to lead the 36-yacht class out of the Solent and after time correction.

Tonight, the fleet are expected to be battling the current which will turn against the yachts at around 1900 BST. Weather forecasts tend to suggest a new easterly breeze of 10 knots arriving during the night, providing the next chapter to the 2015 Myth of Malham Race.

The International Maxi Association's Volcano Race, organised in conjunction with the Yacht Club Gaeta EVS, this year saw the full course sailed with a worthy win on handicap by one of the smaller, older yachts competing.

After a delay waiting for the wind to fill in on Wednesday, the race committee chose to 'reverse the course', sending the fleet off from Gaeta on a 391 mile anti-clockwise lap of the Aeolian Islands to the north of Sicily. The boats first rounded Alicudi in the west, continuing on to Vulcano and Stromboli and its tiny neighbour, Strombolicchio, before returning north to Gaeta, leaving Capri to port.

The bulk of the fleet arrived back in Gaeta over the course of Friday with the Hungarian canting keeler Wild Joe second home at 16:26 local time, 19 minutes ahead of the brand new Southern Wind 82, Grand Orazio.

Overall victory in the 2015 Volcano Race went to the heavyweight Swan 65, Shirlaf, of Italian Giuseppe Puttini, which arrived in Gaeta at 02:17:11 local time on Saturday morning. After correction under IRC, the time of the classic Swan – with a crew including former America's Cup helmsman Paolo Cian - ended up a substantial two hours 19 minutes faster than the second-placed Wally 60 Good Job Guys of Enrico Gorziglia.

The International Maxi Association's 2015 season continues with Menorca Maxi taking place next week over 26th-31st May in Mahon for the Wally and Maxi72 classes.

Seahorse June 2015
What's in the Latest Edition Of Seahorse Magazine 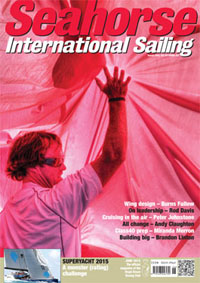 Update
Andy Claughton of BAR is happy to be working on the AC48, Terry Hutchinson is not quite as enamoured with the AC35 changes, Julian Everitt sums ‘things’ up and Blue Robinson talks to SCA’s Sophie Ciszek

Keeping it in proportion
Rob Weiland asks if the big regattas have not become too dependent upon sponsor largesse...

Normandy Channel Race
They're off! At 16:09pm local time Sunday, in a light 10-knot wind and a glorious Norman sunshine, the 16 Class40s competing in the 2015 vintage of the Normandy Channel Race set sail in front of a big crowd. Objective: 1,000 nautical miles taking in the English Channel and the Celtic Sea!

The coastal course offers up a fabulous spectacle offshore of Ouistreham on France's North coast and it's the Class40 Campagne 2 France skippered by Briton Miranda Merron and Norman Halvard Mabire, who puts on a brilliant demonstration with a faultless round-the-cans section to kick off the action. Ahead lies the Saint MarcoufIslands before the fleet switch due North towards the southern coast of England.

The fleet is set to round the first course mark (SaintMarcouf Islands) this evening at around 22:00pm local time before crossing the English Channel to make the Isle of Wight tomorrow.

With the first building blocks of the programme - 8 Hobie Wave catamarans - arriving on the island this week, the opportunity to test sail the boats with 14 youth sailors was too good to pass up.

The Endeavour program will operate from bases on the eastern and western ends of the island of Bermuda, beginning late in the summer.

The Youth Sailing component will provide sailing experiences for kids aged 9 to 12 years old as well as access to tours of the ORACLE TEAM USA base in Dockyard, where they will be exposed to the incredible technology and innovation at the heart of a modern America's Cup team.

There is also a STEM program (Science, Technology, Engineering, Math) themed around sailing and the America's Cup.

No Fremantle-Bali Record, But Indian Set To Take Line Honours
Photo of Indian by Crosby Lorimer. Click on image to enlarge.

Despite a very quick race by Craig Carter and the crew on Indian and with their yacht now about 5 hours and a cooee from the finish line it is evident that Super Sled's 2013 race record of 5 days 23 hours 30 minutes 24 seconds for the Wonderful Indonesia Fremantle to Bali is safe for another two years. And given the speed in which Indian has sailed the course and still fallen just short of the record it seems it may be safe for several years to come.

However with Indian just 67nm from the finish, the Rolly Tasker Trophy for Fastest Time which commemorates the inaugural record set by Rolly Tasker and Siska in 1981 and had previously stood for 30 years, looks likely to be bettered by Indian by some hours.

Still to come for Indian though is the Bali approach and as Paul Eldrid co-helmsman on Indian can attest from his 2013 attempts to cross the finish line to become the eventual handicap winner on his yacht General Lee nothing can be taken for granted in the light winds and strong currents of the Lombok Straits.

To track the fleet on their progress to Bali follow the race via the Yellow Brick Trackers here: http://yb.tl/f2b2015

The Wonderful Indonesia Fremantle to Bali is a 1440 nautical mile ocean race which starts in the historic Port of Fremantle and finishes in exotic Bali. Presented by Fremantle Sailing Club with its naming sponsor the Ministry of Tourism of the Republic of Indonesia the spectacular biennial event is one of Australia's most exciting blue water yacht races. -- Les Valmadre