The Fleet Leaves Newport
Spanish boat MAPFRE (Iker Martinez/ESP), winners of the in-port race a day earlier, were again the class act as they led the six-boat Volvo Ocean Race fleet out of Newport at the start of Leg 7 after a hugely successful stopover.

The crews now face an Atlantic crossing to the Portuguese capital of Lisbon that will test their seamanship to the full, but they could be forgiven for taking one, last, backward glance to the packed docks of the sailing-crazy Rhode Island town.

The only North American stopover of the nine-month offshore marathon race has delivered hoards of fans every day to see the boats close up since the fleet completed Leg 6 from Itajai, Brazil, on May 7.

The stopover has been so successful that race officials have changed their normal protocol and offered the Newport organisers a two-month window to seal a deal as the next race's only North American stopover in 2018.

For the first 24 hours of the leg, the fleet should experience comparatively light winds before harsher conditions and the Gulf Stream make their presence felt.

There is also ocean debris, whales, shipping and wildly fluctuating weather to contend with in the North Atlantic. 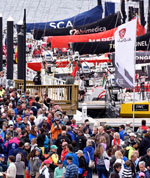 Spanish boat MAPFRE (Iker Martinez/ESP) dominated from start to finish to claim their first victory in the Volvo Ocean Race in-port series here on Saturday, watched by a packed dock of thousands of Newport sailing fans

The MAPFRE victory in the Team Vestas Wind In-Port Race Newport, achieved after they grabbed a narrow advantage at the first mark, will be particularly sweet for skipper Martinez who was returning to the crew after missing the previous leg through other commitments.

They were chased all the way by the home-town favourites, Team Alvimedica (Charlie Enright/USA), who were delighted to finish second on the podium, but never really threatened to mar MAPFRE's day after Martinez led them from an early advantage in overcast conditions. Abu Dhabi Ocean Racing (Ian Walker/GBR) could be forgiven for being almost as happy with the result as the two boats that beat them, having trailed during the first leg.

A positioning error by the women of Team SCA (Sam Davies/GBR) gave them the break they needed to claim the final podium place in third.

This result gives them the lead in the in-port race series on 19 points.

Smocks Vs Jackets: Which Do You Prefer?

Are you a Jacket or a Smock person? Hudson Wight recently ran an informal online debate on its Facebook page which resulted in some interesting comments and feedback. It seems that many professional sailors and those who sail offshore tend to prefer wearing a Smock rather than a Jacket.

Both designs in the Hudson Wight range provide 100% levels of waterproofness, breathability, durability and comfort but there are distinct aspects in the design of the Smock that makes sailors feel that much more protected when sailing offshore, sitting on the rail or working harder in heavier, colder, weather conditions. Jackets are more favoured by women as they're easier to remove when requiring the heads. Whatever your preference, Hudson Wight's HW1 Jacket or Smock delivers the goods.

If you're in the market to try something new and innovative on the clothing front, your first port of call must be Hudson Wight - either online www.hudsonwight.com or pop into our showroom at One The Parade, Cowes.

Congressional Cup
No press release yet as we go to press tonight, but updates on social media tonight note that Taylor Canfield has won.

Full report in the Tuesday issue.

The day began with a long, hot, wait ashore in no wind and rising temperatures, and just when everyone thought the day would come to nothing, the flag was raised to send the fleet out for the medal race. The final race for the rest was abandoned as there wasn't enough time.

The medal race was started just in time in a stable breeze building to around 10 knots on the first upwind.

Ken Read is more used to taking the helm in the Volvo Ocean Race than voluntarily taking a dip. But the President of North Sails signed off his live TV commentary from the start of Leg 7 in Newport by jumping off Team Brunel into the freezing water of the Narragansett Bay to prove he's worth his salt. More than $4,000 was donated over the weekend to get Ken to take an icy swim for Sailors of the Sea. Brunel and North Sails have both committed to match the pledges. All contributions will support Sailors for the Sea's No Trash. No Trail. No Trace. campaign that activates boaters to protect the ocean we all love.

Speaking after the jump, Ken said "Everyone knows I hate the water and it seems the Volvo Ocean Race fans wanted me to get wet. But I'm proud to support Sailors for the Sea through my misery! A huge thank you for all the donations so far and please keep donating. The Newport stopover was truly awesome so it was a great way to end it. Good luck to all the teams and I'm looking forward to seeing who takes the win at the end of the race."

Armen Race : Good Racing For All
The 2015 ArMen Race from La Trinite sur Mer started a day late this year due to a storm in Brittany on Thursday 14th May for which a Figaro sailor Yoann Richomme who went training from Port La Foret reported a steady 31 knots with gusts up to 47 knots

Racing finally got underway at 8AM on 15th May with three different courses for competitors depending on size/speed of boat: the MOD70 Oman Sail skippered by Roland Jourdain together with the IMOCAs and Multi50s had the longest course but nonetheless the Omani crew once again achieved the line honours victory as with the previous year

Amidst the other classes a much appreciated competitor was one of the Eric Tabarly boats Pen Duick III. -- Anne Hinton

Porto Venere, Italy: Congratulations are in full order for Edoardo Lupi and Massimo Pessina - owners of Torpyone - now crowned the 'King of Poets'. Together they have conquered the eighteen-strong fleet in Porto Venere, the second stage of the 2015 Audi-Tron Sailing Series.

Only one last race, race number six was held under moderate, yet shifty and tricky breeze.

Finishing second on the podium was overnight leader Giangiacomo Serena di Lapigio helming G-SPOT, by far making this his best finish ever in the class. The young American DeVos, thanks to a second-place result in the final race stands third.

The next event in Europe is at the beautiful location of Riva Del Garda on June 5-7, then onto Porto Ercole on July 10-12 as a final warm-up and opportunity to fine tune the boat and crew for top-notch Worlds competition. The World Championship will take place on August 26-30 in Trapani. 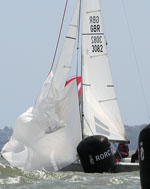 Cowes, UK: As forecast the day opened with light airs and overcast skies so Race Officer Rob Lamb initially held the crews ashore giving them time to enjoy a relaxed Sunday morning coffee. By noon the sun was out, a classic Solent sea breeze was building from the south west and racing was underway for the first of two windward leewards for all classes, races eight and nine of the series.

The Quarter Tonners were as tightly packed as ever and arrived at the first mark of race eight en-mass. In the overall standings Sam Laidlaw and "Aquila" claimed victory by six points from "Alice II" with "Blackfun" third and "Bullit" fourth.

In the SB20 class "Forelle Estates" owned by the Llewellyn/Wakefield/Virgus partnership added an eighth win to their score card to claim an impressive straight bullets overall victory.

Tony Mack and his crew aboard J/111 "McFly" were once again on flying form and took a very confident win in race eight to secure the series. They were enjoying the racing so much that they stayed out for race nine and cruised to third place which they promptly discarded as their worst result.

In the J/109s Ian Nagle's "Jelly Baby" put the final stamp on their already impressive lead by adding a third followed by a win to secure first place overall.

Artemis Racing Touch Down In Bermuda
Artemis Racing became the first America's Cup challenger to launch its AC45 development catamaran in Bermuda this week. The Swedish team's wing-sail foiling AC45 Turbo began sea trials in the Great Sound on Tuesday after being launched from its new temporary base at the Royal Naval Dockyard.

The first two days of sailing provided a real insight into what the team can expect ahead of America's Cup World Series Bermuda this October, and the finals of the 35th America's Cup in 2017.

After two weeks of sailing Phantoms, Moths and A-cats the team's tent arrived on Tuesday and was up in time for delivery of their most valuable asset on Friday. Artemis Racing's shore crew worked tirelessly through the weekend to get the boat together and ready for sailing. After the mandatory system checks the team were soon flying round the Great Sound, travelling to the boundaries of the course, managing to get a solid four hours under their belt on day one.

Commenting on the swell of local support and interest, "We have been overwhelmed by the warm reception from the people of Bermuda. You can already feel the excitement on the island and we're still over two years away from the main event" said Percy.

* From Sir Robin Knox-Johnston: Regarding your reprint of Elaine Bunting's editorial in Yachting World calling on Knut Frostad, Russell Coutts, Mark Turner and Ben Ainslie to provide 'Strong Male Leadership' for women's sailing, I'm pleased to see my omission from such a list as reflecting the strong female representation we have had for many years in the Clipper Round the World Race, soon to celebrate its tenth edition of the biennial circumnavigation designed for Corinthian sailors.

We regularly have 35-40 per cent female share of our crew. That'll be around 230 women of a wide range of ages and sailing experience competing in our 2015-16 edition. Pretty much in line with Elaine's observation that 40% of competitors at Cowes Week are women.

This can only be a good thing as we continue to introduce hundreds of women (and men) to sailing and offshore racing in every global series. That's thousands over the last 19 years.

Last year Vicky Ellis from Bristol led the crew of Switzerland and took the Jane Tate Memorial Trophy in the 69th Rolex Sydney Hobart Yacht Race. This will again form part of our global 2015-16 series and for Wendy it will be her ninth RSHYR.

We'd certainly welcome more applications from female skippers. Let's see if we can get that up to 40% of our skippers for the 2017-18 edition!

The Last Word
There is no line between the 'real world' and 'world of myth and symbol.' Objects, sensations, hit with the impact of hallucination. -- William Burroughs