No Hope For Paralympic Sailing In 2020
Following the International Paralympic Committee's (IPC) decision on 3 February 2015 that sailing will not be included in the Tokyo 2020 Games, the ISAF Executive conducted a review of the announcement.

It was confirmed by the IPC to ISAF that the process to select sports for the Tokyo 2020 Paralympic Games has officially ended meaning the IPC's decision on 3 February 2015 stands.

Up until recently Disabled Sailing and in particular Paralympic Sailing was governed by an affiliate organisation to ISAF called the International Association for Disabled Sailing (IFDS). IFDS were given three separate chances to justify the inclusion of sailing into the Tokyo 2020 Paralympic program and did not make a convincing case. As a result, sailing was not included as one of the sports for the Tokyo 2020 Paralympic Games. 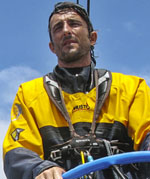 One of Spain's leading sailors, Javier de la Plaza, has been called up by Team Brunel (Bouwe Bekking/NED) to fill an important gap in their Volvo Ocean Race crew

After Frenchman Laurent Pagès was forced out through injury, Dirk de Ridder (NED) stepped in for Leg 5, which the Dutch boat completed on Sunday in fourth place behind winners, Abu Dhabi Ocean Racing (Ian Walker/GBR).

However, De Ridder has explained that he has existing commitments outside the race and cannot continue.

The Spaniard sailed for Telefonica Black in the 2008-09 edition - Bekking was skipper of Telefonica Blue - and has an enviable competitive record.

In the same class, he won silver and bronze at the European Championships in 1999 and 2001.

He took fourth place in the 49er class at the 2000 Olympic Games in Sydney. He also recorded many victories in the eight-metre J/80 keelboat culminating in gold at the 2007 and 2010 world Championships.

"Best-Ever" wearer comfort and performance are the driving forces behind the conception of the Elite range. By significantly reducing weight without compromising the durability of waterproofness the wearer enjoys a host of tangible benefits. Movement is less restricted (a benefit further enhanced by Slide-Glide Technology) and so by definition the wearer becomes less fatigued and mobility across the deck is improved.

The Lightest, Most Breathable Offshore Gear Ever, Without Compromise:
www.henrilloyd.com/elite/

One Planet, One Ocean & Pharmaton Take Fourth In The Barcelona World Race
In the end, the Mediterranean was kind to Aleix Gelabert and Didac Costa on One Planet One Ocean & Pharmaton. The Barcelona duo, who had fought so hard and so exceeded expectations to score a hugely deserved fourth place, were granted a respite from the battering headwinds which signalled their entry to the Alboran Sea, whilst avoiding the shoreside shutdown of breeze which plagued earlier finishers. One Planet One Ocean & Pharmaton instead enjoyed light south-south-easterlies over the course of this afternoon, which carried them downwind to the finish line in front of the W Hotel at 5-6 knots.

The duo sailed an actual distance of 27,791 miles in 98 days, 9 hours, 12 minutes and 9 seconds, at an average speed over the ground of 11.8 knots. They arrived 14 days, 3 hours, 21 minutes and 44 seconds after the winning boat, Cheminees Poujoulat, skippered by Bernard Stamm (SUI) and Jean Le Cam (FRA), who arrived on March 25 th at 18.50 local time (17.50 UTC). Second went to Guillermo Altadill (ESP) and Jose Munoz (CHI) on Neutrogena and third to fellow Spanish skippers Anna Corbella and Gerard Marin on GAES Centros Auditivos.

The Catalan pairing onboard One Planet One Ocean & Pharmaton were the undisputed 'rookies' of the race - this was their first attempt at a round the world voyage, neither had ever sailed in the Southern Oceans, and yet they not only finished fourth, but were the third team to complete the course non-stop.

At the moment, as Dongfeng Race Team, we are living in a world of what ifs.

Half of the shore team are in Itajai, waiting for the mast and the boat. The other half, after an epic journey across South America to get to Ushuaia, are delivering the boat to Itajai with Chinese sailors Wolf and Black. The rest of the sailors are relaxing at home ready for a crazy final few days before the restart. Last update was that the delivery team were exactly half way between Ushuaia and Itajai with 100nm to go worried they might not have enough fuel onboard. The expected time of arrival for the Volvo Ocean 65 'Dongfeng' is Monday 13th April - at best.

13th April is also the expected time of arrival for the mast - at best. The mast has been flown from Dubai to Amsterdam. Today at 1900 it will be loaded onto its connecting flight from Amsterdam to Sao Paolo where (once it clears Brazilian customs) it will be loaded onto a truck and driven down the Brazilian coast to Itajai. Where a relieved Logistics Manager by the name of Marine Derrien will shed a small tear of relief.

However, that will just be the beginning of our race against time. Once we have the boat and the mast, there is the work that normally takes a week to do in half that time - to prepare the boat itself after the tough leg from Auckland, and to prepare, setup and tune the new mast and rigging. And at the same time make sure the sailing team have their heads focused on the next leg - to be competitive in a fleet that has just got better and better with virtually nothing to separate the top 5 anymore in terms of performance on the water.

Onslaught
To misquote Mark Twain, 'reports of the death of the TP52 class have been greatly exaggerated'. Rob Weiland looks at the (many) latest launchings

The new TP52s are coming out of their build sheds one after another as we witness the latest trends in design and equipment... as well as their owners' tastes for colours and graphics! Exciting times for all involved.

It will take a lot to top the Mad Max airbrush work on Harm Muller-Spreer's Platoon. You might have the idea but then to execute it at this quality and scale is less than straightforward. Platoon is the first TP52 for her builders, Dubai-based Premier Composite Technologies. But for Rolf Vrolijk she is his 23rd TP52 design...

Next to leave the yard, Cookson Boatbuilders, is Vrolijk design no24 Provezza. She was built alongside the Marcelino Botin-designed Sled which is already packed up for transport to Valencia. These two boats up the number of Cookson-built TP52s to 15, while Botin with five new boats can now count 19 TP52 designs.

At the first round of the five-event 52 Super Series 2015, Valencia Sailing Week, expect to see 13 boats.

Spring racing is well underway for the many J Boats one design classes in the UK. These fun-to-sail, easy-to-handle, performance sailboats can be enjoyed by a broad spectrum of sailors, explaining their popularity in one design and under IRC. The phenomenal success of the J/70 has been well documented, and record sales are set to continue with hull number 800 shortly arriving here, joining the fifty boats already sailing UK waters. A close knit community, members of the J/70 class have already enjoyed success in Monaco and Spi Ouest this year in preparation for their July World Championships in La Rochelle.

The newest 30ft one design class, the J/88 fleet, is also growing nicely, with enough teams entered into the Warsash Sailing Club Spring Championships to have their own set of results. We will have ten boats here by the time the first National Championships take place at the Landsail Tyres J-Cup in Partnership with B&G in June. The J/88 offers genuine planing performance coupled with overnighting accommodation, sea toilet and inboard engine. The biggest model in the J Boats sport range, the J/111 , offers 'turbo-charged' one design racing. The fleet have an exciting programme this year, including a European Championship in Cherbourg and World Championship in Rhode Island this June, four British teams are gearing up to compete.

J Boats have been marketed in the UK for twenty years by Hamble based Key Yachting.

Melges 24 World Championship
Middelfart, Denmark: At the end of the first period of the pre-registration, more than 100 boats have been registered to participate at the worldwide gathering Melges 24 World Championship 2015 in Middelfart, Denmark. From 30th June to 5th July, Match Racing Denmark along with Middelfart Sailing Club and in cooperation with International Melges 24 Class Association will run one of the largest Melges 24 class title events in the class history.

The numbers speak for themselves: 111 teams from 19 countries and a bit less than three months to its start will be on what is already seen as one of the best Melges 24 world championships in recent years. Last time when the class met such fleet was with more than 125 crews from 22 nations in Torbole, Italy in 2012.

Team France boss Franck Cammas made the revelation in an interview with French radio station Europe 1.

Team France are well behind the other challengers, struggling for finances to return to Cup action.

But Cammas, who told the radio station they were still searching for funding to find the "€7 million per year to be in the America's Cup with a chance to win", said they'd been given a helping hand by Oracle.

"We have some very good news: the Americans, Oracle, have decided to share their design and to collaborate with Team France," Cammas said.

Basic gave an immaculate performance over the three days, beating Dejan Presen from Slovenia in the finals 3:0. Competitors experienced perfect conditions to test boat set-up, tactics and teamwork, in the three round robins (33 matches) that took place.

This is the first International Sailing Federation (ISAF) Grade 3 Match Race hosted by the PMYC, which has been steadily growing its international regatta series since 2009.

* From Alex Watters: I've already said my piece re: this event killing boat selection on Scuttlebutt (US) but after reading Ainslie's Oraclized statement he couldn't be more wrong. Gunboats fly, Lasers fly even Opti's have flown....to believe that a small ONE DESIGN foiling cat is going to have the elite thrilling hook to get the public's attention is not going to happen. In two years time the boat will be outdated. The allure of the completely unattainable nature of all previous Cup boats is gone. The creative design, always one of the most exciting aspects, is also gone. What is left is a silly OD cat regatta that will not attract much attention.

Bottom line here is the C Class cat has taken over the mantle of the worlds most progressive design, all done to the simplest of rules. The challenge and skills required to win the 'Little Cup' have now surged past the Am Cup. The Am Cup has become a 2nd tier event to the C cats...sad but true!! These seemingly underpowered 48 footers may attract some poorly funded teams...who know, but more importantly who cares. All the a best aspects of the Cup are gone! Sir Ben, great sailor, is just trying to make a living sailing...but he has totally lost his way!!! 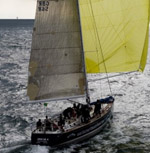 Exceptional example of her class, a Regatta Swan with deep keel and tall carbon spar. Comes with all the go faster Kit from North as well as the whole cruising kaboodle.