Bacardi Cup-Day 4
Coconut Grove, Florida, USA: Another picture perfect day with excellent sailing conditions. The wind was a bit lighter today starting out at 11 knots and dropping to 8 by the finish. The fleet was well behaved on the starting line so no Black Flag today and no one was over early. We had another great start and were in the top 5 at the first mark. Not going super fast but ok.

There weren't any big shifts out there today as the wind oscillated up and down 5 degrees around 165M.

Brian Cramer of Canada got to the first mark first with and we were just behind the Brazilians Lars Grael and Jorge Zarif. Unfortunately we were slow again down wind today and lost about 5 boats on each run. We rounded the second windward mark 7th and finished 12th.

I am really scratching my head on this one but I am sure I will figure it out. A bit late for this regatta but I guess life is that way.You just keep learning and in some cases relearning.

The points are close enough that we can move up or down with two races to go.

The forecast for tomorrow is light...6-8 knots of wind. That could mix things up a bit as a lot more boats will be competitive and if there is any substantial wind shift, it won't be hard to be mid fleet at the first mark.

Saturday is forecast to be back on the 10-12 knots which is pure boats speed weather. -- Paul Cayard

Cheminees Poujoulat Into Se'ly Trade Winds Friday
The regime of reaching and downwind sailing was rudely interrupted for a few hours for Bernard Stamm and Jean Le Cam on Cheminees Poujoulat. The race leaders, just north of the latitude of Rio, will transition tonight into the more regular SE'ly tradewinds. They are now sailing the reciprocal course of the Transatlantic races that they have done many times in their career and that will enhance their feeling of returning home. Indeed Le Cam won the Transat Jacques Vabre into Brazil's Itajai 16 months ago, and both have been several times to Salvador de Bahia which they will pass Saturday. And from now until the Doldrums the leaders will enjoy a regular, if bouncy, ride north.

Also in transiton are Neutrogena and GAES Centros Auditivos. Guillermo Altadill and Jose Munoz are on the cusp of breaking into NW'lies which will back into the SW to give Neutrogena a welcome fast ride in reaching and downwind conditions. Having done 48 hours penance in light, fickle and frustrating winds generated by the high pressure, as a new low builds from Uruguay the second and third placed boats can take full advantage.

Racing started on schedule at 11.00 with the prevailing easterly blowing at approximately 20 knots. After yesterday's circumnavigation of the island, the Race Committee today sent the fleet - split into two classes - on coastal courses that took them from the start off Necker Island to round the Dog Islands archipelago to port. From here the Class B yachts headed upwind to the finish off Necker for a total course length of 22 nautical miles. The larger Class A boats meanwhile continued south to round Ginger Island before returning to cross the same finish line for a total of 26 nautical miles.

Both of yesterday's winners, Swan 80 Selene (Class A) and Swan 53 Music (Class B), put in near-perfect performances once again to rack up their second consecutive bullets.

Racing continues tomorrow, Friday 6th March with the easterly breeze forecast to continue, falling just slightly to around 18 knots. The first start is scheduled for 11.00. (AST). 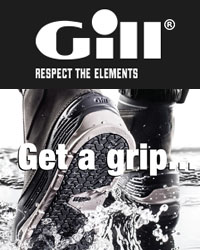 Anyone spending time on the water will fully understand the importance of a confident grip, secure footing and comfortable support. Two new footwear developments from Gill offer all this and much more. At the very beginning of our design and development programme we went back to basics - assessing the priorities of the end user without following the crowd of 'me-too' boots already in the market. The subsequent designs are the end result of an extensive performance-led design process.

From early design concepts through to test prototypes we've consulted consumers at both amateur and professional level, refining our designs at each development stage.

The resulting Gill Race Boot is an innovative solution for those wanting the sturdy waterproof protection of a sailing boot without having to sacrifice manoeuvrability.

The 2015 RC44 Championship Tour starts in Valletta on March 25, the first regatta of a five-event calendar that moves to Italy, Sweden, Portugal and the British Virgin Islands.

The tour sails in a one-class monohull design that is the brainchild of Sir Russell Coutts and was launched in 2007. It features global businessmen racing alongside some of the world's best sailers.

In announcing the 13 team lineups today, the class association trumpeted the arrival of Barker on board the Russian entry Team Nika, which will be skippered by owner Vladimir Prosikhin, an entrepreneur who made his fortune by getting in at the ground floor of the computer boom in the 1990s.

No 'Floating Rubbish' Collection for Olympic Sailing Venue
Rio De Janeiro: A program has been halted to retrieve floating rubbish from the sailing venue of the 2016 Olympics in Rio de Janeiro, according to Brazilian media.

A report Tuesday in the newspaper O Globo comes just three days after top International Olympic Committee officials ended week-long meetings in Rio, saying they had been "reassured" that severely polluted Guanabara Bay would be suitable for Olympic sailing when the games open.

O Globo said 10 rubbish collection boats were out of service because of a lack of funding from Rio's state government. It said that some barricades to keep household waste from reaching the bay also lacked funding.

The paper quoted Carlos Minc, the former secretary for the environment for the state of Rio de Janeiro.

Planning For Your Spring Safety Checks
As springtime rolls around and we start to get our boats ready for the upcoming season, we turn our attention to doing the usual chores; bottom paint, varnish, engine maintenance and all the other little tasks that need our attention. There is, however, one critical area most boat owners overlook and never give a second thought to. That is of checking and servicing their safety gear.

I know there is a lot to do when commissioning your boat, but this is one area you could well regret not paying more attention to should an emergency arise. None of us like to think anything will go wrong on our boats and all this extra safety stuff we carry will never be needed. With luck you will be right and you will never need to use any of the safety gear aboard, but the truth of the matter is, things do go wrong and you want to be ready just in case.

As a marine surveyor part of my job is to inspect a vessel's safety gear. Over the years I have been surprised at just how often I find this critical equipment lacking. And I am not just talking about out of date flares and burned out running lights, but critical equipment such as life jackets and life rafts. Most owners seem a bit surprised when I point out problems with their safety gear because it is not something they give much thought to.

About That Funding...
The [New Zealand] public, who are also the ones contributing the taxpayer dollars, is left wondering if [the ongoing media floggins re: Dean Barker / Grant Dalton] is treachery from within, if their money is going towards another full challenge in 2017 or just towards an Auckland regatta early in 2017 to act as a seeding mechanism for the Cup challenger semi-finals in Bermuda later that year.

They have also been told that TNZ in a trimmed, 50-person form starts work on Monday 2 March and that the budget has already been cut by NZ$20m. But not from what nor to what. Sponsors need certainty both financial and sporting. Ben Ainslie's Portsmouth-based British challenge is hoping for £80m. in total, but has yet to announce a title sponsor in addition to its private backers.

The Italians have announced only €80m. from Prada but have additional support from Chinese computer manufacturer Lenovo plus other sponsor partners. Sweden's Artemis challenge spent up to €120m.

Larry Ellison's Oracle, moving from San Francisco to the tax haven 2017 venue of Bermuda, despite cuts still has a budget for which the French, yet to announce any serious financial programme, would give eye teeth. -- Stuart Alexander 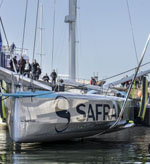 On Thursday, February 5 at 1730hrs (French time) at the CDK boatyard in Lorient, Safran, the new IMOCA 60 skippered by Morgan Lagraviere was launched for the first time. After a year of construction in Port-La-Foret and then Lorient, the VPLP-Guillaume Verdier-designed boat, the first of the new generation of 60ft boats built for the 2016 Vendee Globe, has been unveiled to the public.

Since 2013, the Safran Sailing Team and the architects Guillaume Verdier and Vincent Lauriot-Prevost, have been working on this project to create an innovative boat with maximum performance, which responds to the new IMOCA rules.

Safran has a powerful hull with foils, a rotating wing mast set further back, a deeper and lower cockpit and a pronounced front section of the hull. "The new rule, which requires all boats to have the same keels and the same masts (wing or classic but standardised), was ultimately not a constraint, but probably a way to innovate again," Lagraviere said. "For my part, I worked especially on the cockpit. The two transats I did onboard the first Safran gave me experience."

Marc Guillemot, skipper of the first Safran, had a major role in the development of the new IMOCA 60, and was able to bring his rich experience of more than thirty years of competitive sailing on all the world's seas.

Anthony McVeigh, British skipper of Dragonfly 28 Bobby Dazzler, has been sailing since he was nine years of age and has been a member of the Royal Ocean Racing Club for over 20 years but this is his first time at the St.Maarten Heineken Regatta. Anthony's multinational crew, sailed his brand new 28ft trimaran from Antigua, in big breeze and lumpy seas, taking just over six hours to reach the Sint Maarten Yacht Club from Jolly Harbour, Antigua.

"It looks like we will have about 30 multihulls racing for the St.Maarten Heineken Regatta, which is virtually unheard of in the world let alone the Caribbean, so it's very exciting to be part of that. We got a fantastic welcome at the yacht club when we arrived, the atmosphere and friendliness of this regatta is another reason why we have come. Looking at the weather, this is going to be an exciting regatta!"

The Last Word
Science, at bottom, is really anti-intellectual. It always distrusts pure reason, and demands the production of objective fact. -- H.L. Mencken