Circle Time: 5000 Miles To Go
Bernard Stamm and Jean Le Cam passed under 5,000 miles to the Barcelona World Race finish line and today also crossed over their own outbound track. The leading duo are starting to feel like the worst of the course is very much behind them.

Having been pressed east around the big high pressure system in the South Atlantic they have continued to have downwind and broad reaching conditions, making 16,3kts today. But as daytime temperatures rise to become much more acceptable Stamm and Le Cam seem set to gain steadily on their nearest rivals, Neutrogena and GAES Centros Auditivos.

The race statistics so far show in favour of Cheminees Poujoulat. Until today they have sailed 21,080 Nms on the water, averaging 14.6kts. They hold the highest 24hrs run at 482.8 Nms on 11th Feburary, the highest 4 hours speed gun average at 21.1kts on that same date. They have lead continuiously since 16th January. Their lead was biggest at 1249 Nms on 26th Feburary.

And they are on course for the biggest win in the history of the race.

This shaves a whopping 4hrs 29mins 15secs from the previous record set by Frank Pong's Custom Dibley 75 Jelik back in 2013.

Fifteen yachts set off at noon on Saturday from Subic Bay in fantastic downwind conditions.

Ragamuffin 90 with its crew of 14, led the fleet out of Subic Bay, where they dropped their spinnakers, turned left and enjoyed fast reaching conditions down through the Verde Island Passage. Then a fast 20 knot run for the last 70 miles to the Boracay finish line. Frank Pong's Jelik finished at 06:14:01 bettering the record time they set in 2013. All the regular competitors have recorded their fastest race times to Boracay.

When the IRC ratings were applied, Ernesto Echauz's all Philippine crew on his TP52 Standard Insurance Centennial III claimed the handicap stakes, by 7 1/2 minutes from Frank Pong's Jelik.

Racing continues for the Boracay Cup on Tuesday, with a combination of passage and windward/leeward races over the next four days. The forecast is for brisk North Easterly trade winds.

Volvo Ocean Race Launches New Young Sailor Award
The Volvo Ocean Race has launched a new award for young sailors in a major competition in the Gulf, aimed at attracting a fresh generation of sailors into offshore sailing to follow champions like Damien Foxall.

The Race has introduced the Volvo Ocean Race Rookie Award for the two best under-30 sailors competing in the EFG Sailing Arabia - The Tour (SATT), which was concluded over the weekend.

The event, contested over a 760-nautical mile (nm) course in the Gulf of Arabia, was first held in 2011 by Oman Sail. Since then, many top-level competitors in the event have been drawn from the ranks of past and present Volvo Ocean Race sailors, including the 2015 winners, Damian Foxall (IRL) and Sidney Gavignet (FRA).

It was the second year running Gavignet's crew won.

The first victors of the Volvo Ocean Race Rookie Award were Team Renaissance Omani sailor, Ali Al Balushi, and the British sailor from the University of Plymouth team, Richard Mason.

Their prize is a trip to Newport, Rhode Island, to see the Volvo Ocean Race fleet after it completes the sixth leg of the current 12th edition from Itajaí, Brazil.

A panel of judges comprising George Catsiapis, CEO EFG Private Bank, Knut Frostad CEO, Volvo Ocean Race, and Gilles Chiorri, EFG SATT Race Director, picked out Al Balushi and Mason as the winners after they were nominated by their skippers in the EFG Sailing Arabia - The Tour (SATT). 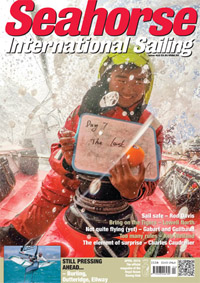 Look closely
Andy Rice discusses technical development with the winners - and the winning designers, sailmakers and builders - at the International Moth and 14 championships in Australia...

18ft Skiffs Queen Of The Harbour
Click on image for photo gallery.

Gayle, with the help of her crew mates John Winning, Jim Beck (her husband) and Cameron McDonald came home strongly in Yandoo after trailing in third place over the first lap of the course.

To avoid any possible injury with very strong winds expected to hit Sydney within the hour, the starter sensibly elected to run the race over two laps of a windward-return course between Clarke and Shark islands.

Since the formation of the Australian 18 Footers League in 1935, the annual 'Queen' race has been one of the most important events on the calendar and still remains that way.

In the very early days of the concept, the club, through the efforts of the various ladies competing in the races, was able to donate substantial funds towards the children's hospital.

A wing of the hospital was actually named in honour of the contribution. -- Frank Quealey

The regatta, a qualifier event for ISAF Sailing World Cup Hyères, is open to all the Olympic Classes that will be at the Rio 2016 Olympics: Finn,470 M & F, 49er, 49er FX, Laser, Laser Radial, RS:X M & W and Nacra 17 with the Laser and Laser Radial fleets registering the higher number of entries at this moment.

The Olympic Classes will be joined by Paralympic Class 2.4mR as well as the Kiteboarding - for the first time in Palma - and the Dragon Class, the Class which marked the starting point of the Trofeo Sofia.

As in previous editions, some International teams that will take part in the regatta are already training in the bay of Palma before the start of the European Sailing season.

Within this training period, a new edition of the Arenal Training Camps Trophy will be held from 12th to 15th March. 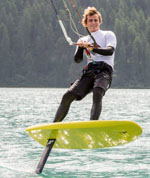 Hydrofoiling Kiteboards will be on display at the world's premier sailing destinations beginning in March 2015. Marking the second year of hydrofoiling proliferance, kiteboard racing has gained popularity with a variety of athletes.

The 2015 tour will be comprised of four stops including: La Ventana Mexico, San Francisco USA, Townsville Australia, and a European event to be announced shortly. The planet's best competitors will vie for the title of KiteFoil Gold Cup champion, a title won by Johnny Heineken on the inaugural tour in 2014.

The tour is run under the guidance of the International Kiteboarding Association (IKA) and Technical Director Robbie Dean. IKA has partnered with Playa Central Beach Club, St. Francis Yacht Club, and Townsville Sailing Club to provide the backbone for each of the events.

One Ton Revisited: Rainbow II Again
Impact, with Andy Ball on the helm, hammers to windward. Photo by Ivor Wilkins. Click on image to enlarge.

The second 20-mile Olympic course race of the One Ton Revisited series produced another classic day on the inner-Hauraki Gulf . The ENE breeze blew 10 to 12 knots at the start and built to 12 to 15 knots by the finish.

The recently restored, former One Ton Cup winner Rainbow II (Chris Bouzaid) was in her element and won by an impressive 6m 40s on IRC corrected time to increase her lead on overall points. Rainbow always was a light airs flyer and appears to have lost none of that S&S pedigree during her complete restoration in the Silverdale yard of Wayne Olsen's Horizon Boats.

The Farr 40 Pacific Sundance (Bernard Hyde) took line honours for the third race in a row, crossing the line more than 10m clear of the second-placed Lidgard design Result (Bevan Hill), but again she was unable to put enough time on the rest of the fleet around the six-leg course to make an impression on handicap.

Behind Rainbow, it was a real tussle for high placings, the Farr 36 Revolution (Tony Wallis/Max Cossey) finishing second on corrected time, just two seconds ahead of the 34ft Lidgard design Impact (Kevin Kelly).

The series is scheduled to resume with the all-important, double-points, 35-mile Gulf Race on Thursday before the 1.5 points, 25-mile finale on Saturday.

A fleet of 21 Swan yachts, comprising an array of different models from seven different countries and territories will contest an eagerly anticipated week of action in the Virgin Gorda archipelago.

Four days of racing are scheduled for the two classes of Swan, Class A (18.29m and above) and Class B (18.28m and below), starting with tomorrow's alluring Around the Islands Race.

James C Madden's Swan 601 Stark Raving Mad from the United States is the defending champion in Class A. Competition will be provided by Swan 80 Selene, runner-up in 2013, and by Swan 90s Freya and Odin as well as Leonardo Ferragamo's Swan 90S Solleone.

In Class B, Swan 53 Music, Swan 53 Naia'a and Swan 56 White Rhino all featured in the inaugural 2013 event and will use that experience to their advantage. The Club Swan 42 Kora, owned by Paolo Scerni of Italy is the week's smallest entrant.

The Series (also supported by Gul, Trident, Overboard and Lennon Sails) started out with some light airs events that played into the hands of the slow- to medium-handicap boats. But at the turn of the new year the breeze increased for a gusty finale to the Series. This brought some of the fast-handicap boats to the fore, not least Datchet Water's Stuart Jones in his Contender who finished runner-up, and the best of a strong contingent of Fireballs, 3rd placed Ian Dobson (reigning GP14 World Champion) and Dan  Scheiber.

Once again the Great Lakes handicap numbers produced some of the fairest racing in the UK's mixed-fleet racing scene, with eight different classes represented in the top 10. The top 10 also produced an equal split between singlehanders and doublehanders, and trapeze boats and hiking boats. The quality of the fleet was also evident with five present or past World Champions represented in the top 10.

J/111 Worlds Registration Open
Newport, Rhode Island: The second annual J/111 World Championship in Newport, Rhode Island is garnering tremendous enthusiasm from 111 teams.  Several boats are participating from the United Kingdom, including the current J/111 World Champion SHMOKIN JOE owned by Duncan McDonald and Phil Thomas. An Australian team from way Down Under is making the trek to sail in Newport as well as a top Canadian team is coming down from the north.  At this stage, over twenty boats have committed to participate, including teams from across America (New England, Lake Ontario, Lake Huron, Lake Michigan, Long Island Sound, Chesapeake Bay, Gulf of Mexico and the West Coast).

Ida Lewis YC is hosting the regatta with support & logistics from Sail Newport from June 15th to 19th (Monday to Friday), 2015.  Registration is now open on the regatta site here.  Charter boats are available as well as "split team boats" (4 local crew + 4 visiting crew- a great way to reduce costs, have fun and sail the Worlds).

The Last Word
No man who believes that all is for the best in this suffering world can keep his ethical values unimpaired, since he is always having to find excuses for pain and misery. -- Bertrand Russell