ISAF / IFDS Dropped The Ball On Disabled Sailing
This note accompanies a posting on the "Reinstate Paralympic Sailing Into 2020 Games" facebook page.

"Here it is, the damning evidence that the disabled sailing committee of ISAF, our international sporting governing body, failed to demonstrate the universally of our sport to IPC. The IFDS / ISAF have, single-handedly managed to wipe our sport from the Paralympic programme. None of IFDS have resigned nor offered any form of explanation or apology. Please forward this to your national governing body for sailing and insist that ISAF lobby IPC in the strongest possible terms to rethink their decision on grounds that the IFDS Committee were not fit for purpose and their submission to IPC was flawed."

(Be sure to click on the graphic to see all four pages, it's rendered as separate images).

* Editor's note... it's a small point, and only one of many Red (bad) scores... but the IPC evaluation gives a red mark for the disabled sailing website. "No data on website traffic are available".

"Oh for f**k's sake" sputtered your humble narrator who luckily did not have a mouth full of coffee when he noted that little gem. The ISAF website is huge, well done, an enormous enterprise, light years advanced from when I ran it from 1995 to 2000. The company that hosts it is world class.

You can view source code and see that the site has Google Analytics and an event tracking script. The previous standalone domain name IFDS.org, originally registered in 2005, is now a redirect (ISAF and IFDS merged in November 2014) to sailing.org/disabled.

There is unquestionably a metric sh** ton of data available on traffic to the old site and new URL. Clearly the IPC was looking for it. It would have taken any competent webmaster (and ISAF's got plenty of them) very little time to compile it.

If they couldn't get that small task sorted, it's little wonder that the rest of the submission was so bad that the IPC voted unanimously to remove the sport from the 2020 Games. Note that the final grading on the IPC evaluation for "Quality of Application" was also red flagged.

Even with all their Rio hands-on experience, there's no way ISAF can polish this particular turd.

And here's the rub... if advocates for disabled sailing use the argument that IPC should reverse their decision because ISAF / IFDS were not "fit for purpose" in their application, what does that say to the IOC about ISAF and sailing as an Olympic sport?

Dongfeng Wins The In-Port Race In Sanya
Sanya, China: China's Dongfeng Race Team (Charles Caudrelier/FRA) served up another glorious home victory in the Team Vestas Wind In-Port Race in Sanya on Saturday after an absorbing battle in the sun.

They only achieved it after a battle-royal with the rest of the fleet, with the lead changing hands through the first four legs as, successively, Team Alvimedica (Charlie Enright/USA), Abu Dhabi Ocean Racing (Ian Walker/GBR) and Dongfeng Race Team snatched the advantage.

Walker and the rest of the crew on Azzam will be more than satisfied with another solid podium finish in second place as it takes them four points clear of the fleet at the top of the In-Port Race Series table (see panel above and below*).

So far, we have had four different winners from four in-port races in a series that is just as closely fought as the offshore legs.

For MAPFRE, it was another disappointing day as they never recovered from their poor start. Team SCA (Sam Davies/GBR) sailed well after winning the previous in-port race in Abu Dhabi in early January, but failed to threaten the leaders here.

The truth is gaining the lead in this race is hard enough but it's going to be a damn sight harder to keep it.

At 0600 CET (1400 local time) the Volvo Ocean Race fleet set sail for leg 4 of the Volvo Ocean Race from Sanya, China to Auckland, New Zealand. Dongfeng Race Team is currently leading the race overall and after winning the in-port race in Sanya yesterday it would appear that Charles Caudrelier and his team are on a roll.

There has always been a struggle within the team to manage the balance between focus on performance and maintaining the long term sporting mission of the team, which is to train up the rookie Chinese sailors to become professional offshore sailors. At no point was it ever considered that we would be in a position where we could have the best of both worlds. But at this point in time it would appear that against all odds we have become a team that is 'in it to win it' all whilst maintaining our original promise.

Caudrelier also has to contend with a big crew change for this leg - half of the team from the winning leg 3 combination are no longer on the boat. Star navigator Pascal Bidégorry is being replaced by French sailor Erwan Israel and Chinese sailors Chen Jin Hao (Horace) and Yang Jiru (Wolf) will replace Liu Xue (Black) and Cheng Ying Kit. 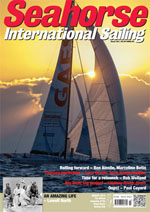 Fantastica!!!
There was never going to be any shortage of enthusiasm when Luca Devoti sat down with designer Juan Kouyoumdjian to create an all-new Finn

With four months to the start of the 46th La Solitaire du Figaro - Eric Bompard Cachemire, 20 intrepid Figaro skippers have signed up to the 2185 mile, month long solo offshore race.

Kicking off on the 31st May from Bordeaux (France), as many as 45 solo skippers and their 33ft Figaro Beneteau IIs are expected to race from the grand city of Bordeaux to Sanxenxo (Spain), Concarneau (France), Torbay (UK) and across the final finish line in Dieppe (France) in July.

This year's early entry list is already evidence of the Solitaire's universal appeal, with registered entrants ranging from race champions and Vendee Globe winners, to talented regulars chipping away at the top 10, rank outsiders and ambitious first timers.

Triple Solitaire du Figaro winner Jeremie Beyou (Maitre Coq) (2005, 2011, 2014) returns to the race in 2015 not only to defend his title, but also with an aim to become the first skipper to have ever won the Solitaire four times.

Making their debut on the Class Figaro circuit in 2015, five ambitious Rookies have signed up for this epic solo marathon so far.

Also joining the fleet but not yet on the list, the Artemis Offshore Academy will contribute as many as three of its talented UK brood to the Rookie fleet. This year British Rookies Rob Bunce, Andrew Baker and Robin Elsey are out to earn themselves a place on the start line. This decision will be announced in May.

Junior Offshore Group 2015 Season
JOG open their 2015 race season with a dash across the Channel to Cherbourg on Good Friday, 3rd April. Open to fully crewed or double-handed entries in IRC Classes 3, 4, 5 & 6 it's the perfect way to blow away the winter lay-up cobwebs and get the sailing season underway.

Class bands (based on IRC rating) have been adjusted slightly for 2015 and are as follows:

JOG are running a full race programme of 16 races in 2015 split across inshore/coastal passage races & longer offshore/ cross-Channel races. In addition to the usual south coast and Channel ports, a new destination is on the calendar in the offshore programme. The North Sails Dielette race via the Casquets, (approx 102 miles), will start late afternoon on Bank Holiday Friday May 22nd - it promises to be a tactically interesting race with a very pleasant port to explore on arrival too.

All races are open to non-members and members alike.

Last Chance To Buy A Mini-Transat In Support Of Sail 4 Cancer
A 6.5 metre Dudley Dix designed 'Mini-Transat' style yacht is being sold to raise funds for Sail 4 Cancer. Originally for sale at a price of £7,500 the price has been slashed to just £4,500 because the boatyard space is needed for another project. The reduced price is intended to push through a quick sale before the end of February.

The boat, which was built as a self-build project in 2013 is being brokered in support of Sail 4 Cancer by Boatshed Hamble. The boat is being sold with all new deckgear from Harken, unused sails from Crusader and Z Spars Aluminium mast spars (2013) with stainless steel standing rigging.

The Dudley Dix Mini is a radius chine plywood design which has received rave reviews both within the United States and Europe. With a fin keel and a round bilge (from sheet material), the design is marketed as a 'low budget performer'.

Whilst the hull needs some work before she can be re-floated, the deck gear, mast and sails are brand spanking new and have never been used. This project would ideally suit someone with a passion for wooden boats who will enjoy the process of finishing this boat to a high standard.

Interested parties should contact Peter Delbridge at Boatshed Hamble on 07710 224 754. Photos of the yacht can be viewed at tinyurl.com/dudley-dix-mini  More information on the design and class can be found at www.dixdesign.com/didimini.htm

Handicap Victory For Wooden Boat In Bruny Island Race
While hundreds of wooden boats were sitting quietly in their berths at Hobart's Australian Boat Festival at sunrise today, another wooden yacht was adding to Tasmania's maritime tradition of building fine boats from timber, sailing slowly up the River Derwent to victory in the 89 nautical mile Bruny Island inshore/offshore race.

Footloose, a 30-year-old Young 88, skippered by Stewart Geeves, excelled in the light winds of the overnight race to win the AMS and PHS handicap categories on corrected time. It was Footloose's second consecutive overall win under AMS scoring in the Bruny Island Race.

Footloose was built of timber by Peter Milner in Launceston in 1985.

When the fleet picked up a morning breeze Footloose then sailed up the river in a group with Gary Smith's The Fork in the Road finishing at 09:01:52, and the next six boats crossing the line in within 26 minutes, Footloose finishing ninth in fleet at 09:27:24.

Virginia was amongst an elite sorority of professional female captains and spent much of her 28 year career in command of Traditional Sailing Vessels. Holding both a 3,000 ton USCG and MCA Ocean Master, Virginia logged over 400,000 nautical miles - and was always quick to add "most of those miles were navigated by sextant."

Although traditional sailing vessels always remained Virginia's passion she continued to upgrade her license and captained private and charter yachts. During her career Virginia was a mentor to many, many crew who continued on to successful maritime and yachting careers.

While Captain Wagner has left us, her legacy continues through a scholarship fund in her name established last October for Rhode Island's Official Sailing Education Vessel, SSV Oliver Hazard Perry, by her friends and family.

The most versatile yacht on the market! This Baltic 45 is setup for both short handed and fully crewed racing, or single / shorthanded cruising or day sailing with friends.

The Last Word
If something can corrupt you, you're corrupted already. -- Bob Marley