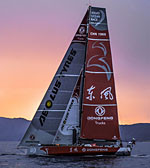 Sanya, China: Dongfeng Race Team claimed a key landmark in the 41-year history of the Volvo Ocean Race on Tuesday when they won Leg 3 in their home port of Sanya to take the overall lead with six stages to go.

No Chinese team has won a leg in the race before despite two previous entries - Green Dragon in 2008-09 and Team Sanya in 2011-12 - but Charles Caudrelier's (FRA) crew put that right in style.

"It's the most stressful leg I've ever done in my life," said a mightily relieved Caudrelier, minutes after crossing the line. "But the result is fantastic!"

After finishing narrow runners-up to Abu Dhabi Ocean Racing (Ian Walker/GBR) and Team Brunel (Bouwe Bekking/NED) respectively in Legs 1 and 2, Dongfeng took a firm grip of the 4,670-nautical mile stage from Abu Dhabi to China virtually from the start on January 3.

At one stage, entering the treacherous Malacca Strait, they stretched their advantage over the fleet to more than 106nm but the fleet never gave up their chase and as they skirted along the wind-shielded Vietnamese coast, Caudrelier found his team's lead cut to under 10nm.

But the 40-year-old and his crew of experienced French sailors mixed with rookie Chinese Cheng Ying Kit ('Kit') and Liu Xue ('Black') plus young Australian Jack Bouttell, stuck grimly to their game plan and slowly but surely stretched their lead once more as they entered the final day's sailing. 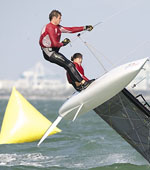 Those who'd prayed for more breeze after last year's light wind-dogged edition of the regatta certainly got what they wished for, as 36 knot squalls made for a tough and physical test on Biscayne Bay.

But Finn star Scott, the Sonar trio and Laser Radial sailor Young revelled in the heavy conditions to lay down the perfect start to their regattas

Meanwhile the high performance classes of 49er, 49erFX and Nacra 17 seemed to bear the brunt of the strong winds with numerous capsizes across the fleets in the strong wind, gusty conditions.

Conditions are set to moderate for Tuesday's second day of Miami World Cup racing with a full schedule in store across the 13 classes.

Racing continues until Friday 30 January for the Paralympic Classes, with the final medal races for the Olympic Classes on Saturday 31 January.

Will you join an international fleet of over 50 yachts, which has now entered the offshore blast around the Caribbean, one of yacht racing's most exhilarating playgrounds with the warm trade winds and a Caribbean swell providing superb sailing conditions. The RORC Caribbean 600 course, starting and finishing in Antigua, is designed to provide a challenging, high speed racetrack.

As an integral part of the crew, experience the thrill of sailing Monster Project's Formula - 1 racing machine. Tackle the worlds elite, and take on tasks such as grinding, hoisting, trimming and even driving a Volvo Open 70 in an extreme racing atmosphere.

This 70 foot technological and architectural masterpiece, forged of carbon fibre and resins, with towering mast, huge square-topped mainsail, twin daggerboards and a canting keel; has a magic combination of displacement, length and sail area and Andrew Budgen, will be skippering the boat to win. Already the battle for Line Honours includes Ragamuffin, Maserati, Rambler 88, Leopard, and of course Monster Project.

For more information on:

Cagliari Confirmed For Season Opener
The city of Cagliari (Sardinia - Italy) will inaugurate the 2015 - 2016 America's Cup World Series, the regattas preliminary to the 35th America's Cup. The event will take place in the Gulf surrounding the island's capital from June 4 to 7, 2015.

The "America's Cup World Series - Cagliari - Sardinia", a top level sporting event with great international visibility, is the result of the collaboration between the Autonomous Region of Sardinia, the City of Cagliari, the Port Authorities, the Navy and Luna Rossa, who has chosen Cagliari for its operations base to prepare its challenge for the 35th America's Cup.

The program entails an opening ceremony on Thursday, June 4th 2015 and one day of mandatory training on Friday, June 5th. There will be two races a day on Saturday June 6th and Sunday June 7th; the prize-giving ceremony will take place on the last day.

The teams will sail in Cagliari from May 31st to familiarize with the race course prior to the start of the competitions.

The event will be officially presented - with a detailed plan of the racecourse, installations on land and various activities - in Cagliari during a press conference to take place in Spring of 2015.

Brandon Pickard, sports tourism development officer, said on Friday that the championships were to be held in Wisconsin, but ice conditions wouldn't allow it.

Sports Tourism Kingston offered some financial help as well as other incentives to bring the event to Kingston in a short period of time.

"It's an interesting sport. With the world championships, they usually wait almost a week before the event to make sure the ice conditions are optimal and then decide where to hold the event," Pickard said.

The IDNIYRA Championships is rotated between Europe and North America, with the North American location rotating between eastern, central and western regions.

Kingston was chosen as a location for the 2015 IDNIYRA Championships because it is within the North American eastern Region and because of its available ice, which is required to be smooth and free of snow.

More than 100 participants from up to 15 countries are expected to attend the championships including Canada, United States, Poland, Germany, Sweden, Finland, Russia and France. -- Ian MacAlpine, Kingston Whig-Standard

Impact is a John Lidgard "Imp" design with Kelly a stalwart of the Panmure Yacht & Boating Club.

Her crew for One Ton Revisited will include Andy Ball and Ian McKenzie as well as sailmaker Kenny Fyfe.

McKenzie is the son of the late John McKenzie, former commodore of the RNZYS (1975/76) and a highly respected offshore racer in his hard-chine Spencer design Sirius, while sailmaker Fyfe is a former, multiple R-Class champion who has raced everything else from Quarter Tonners to Bob Graham's 48ft Davidson design Snow White II. -- Alan Sefton 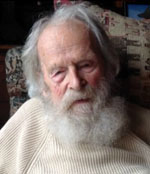 The then 23-year-old sub-Lieutenant piloted landing craft on to the Omaha beach as part of the liberation of France in the last year of World War II.

The Royal Irish Yacht Club sailor, who undertook a number of significant cruises in the vintage Dublin Bay 24 boats, was a member of the Glen class, racing Glenshane with joint owner the late Franz Winkelmann in the 1970s. Later the pair owned the Ruffian 23 Siamsa.

Mickey was second in command of the Royal Navy landing craft. They landed on Omaha beach just after dawn. 'There was a whole buncxh of landing craft. The big thing was to try and get on the beach without crashing into other craft. That took seamanship' he told the Sunday Independent newspaper.

Australian Match Racing Championship
In a five race series that was full of drama and interest, Matt Jerwood overcame the experience of Evan Walker to claim his first national match racing title with a three-nil score line.

Sailed on the Canning River adjacent to the South of Perth Yacht Club, conditions on the last day of the four day regatta were typical, with south westerly breezes fluctuating from 12 and up to 20 knots, making control difficult at times.

Jerwood sailed a copybook first race to claim a narrow and uneventful win, but even the skills of Evan Walker were not enough to prevent his BW8 sliding out from beneath him and into a wild broach. In race two of the five-race final, Jerwood rounded the top mark for the first time with a narrow lead and set off on the downwind leg with a perfect spinnaker set. Behind him Walker was hit by a gust as the spinnaker filled, rolling it into a gybe and savage broach which took several seconds to correct. By that time, Jerwood was away with an unassailable lead. Score now two-nil.

Jerwood won the third race by some two boat lengths, and with it, the National Match Racing Title. -- Bernie Kaaks

The This Girl Can campaign launched on national TV to support more women to take up the sports and activities they want to pursue.

And according to award-winning Cowes-based sailor and mentor Annie, the campaign is vital in attracting women to the possibilities sport can offer beyond simply keeping fit.

The Sport England campaign, which has already been described as 'ground-breaking', is also backed by sporting greats and celebrities including Clare Balding, Dame Kelly Holmes and Sally Gunnell.

Research shows that two million fewer women regularly participate in sport or exercise than men, despite three quarters of women between 14 and 40 saying they would like to do more.

Girls For Sail founder Annie, whose firm is based at Shepard's Wharf Marina in Cowes and in St. Lucia in the Caribbean, added: "We already do whatever we can to encourage women to participate in sport but this campaign will be an enormous help in making sure that this is a national call to arms.

The organisers say they are limited by resources and personnel but hold out hope that the class could be reinstated if they 'receive written entries from eight compatible dinghies (on block) to the regatta secretary'.

Mixed dinghy sailors argue the decision to drop the class for the 2015 is 'a most disappointing outcome'.

Ireland's biggest regatta is expected to have over 500 entries this year.

Organisers say that 'due to a request from the Laser Standard Rigs to have their own start, the low number of other PY entries during previous regattas, and the large number of other classes to be catered for, it has been decided not to give a PY start in 2015.

Unique opportunity to purchase an ENTIRE FLEET of Swedish Match Race yachts to add to an existing fleet or just to start up a new venture. Call for full details.

The Last Word
When something is important enough, you do it even if the odds are not in your favor. -- Elon Musk