They will have lighter winds though tomorrow before breaking into the N'lies which will slingshot them south faster, into the low pressure train which is lined up for them.

For their part, We Are Water and One Planet, One Ocean & Pharmaton continue their progression about fifty miles from each other. Two hundred miles from the equator, the crew of Spirit of Hungary will soon also be in the South Atlantic waters ready to take their turn in the battle with St. Helena.

How It Happened
After leading the Barcelona World Race since the first full day of racing, for most of 14 days and having recently extended their lead on the water to what the skippers estimated to be around 60 miles, pre-race favourites Alex Thomson and Pepe Ribes on their IMOCA 60 Hugo Boss, were dismasted on last night (Wednesday) in the South Atlantic ocean in relatively moderate wind conditions.

The English-Spanish duo are heading to Salvador de Bahia, Brazil, under engine. Making around 6 knots with enough to fuel to get most of the 370 miles west to the Brazilian port should which should take around three days. The duo had already set a new record in the Mediterranean for the passage from Barcelona to Gibraltar and a course record to the Equator.

Thomson, 40, and Ribes, 43, were making a sail change when it is believed that the central pin in the headsail furling drum sheared while the British skipper was right beside it, leaving the mast unsupported from the front of the boat. He had to watch helplessly as the mast and sails fell backwards, the mast itself breaking after it landed resting half on the boat and half out.

" The guys were both on deck. They were putting the jib top up and taking the J1 (headsail) off. Alex was up on the foredeck, Pepe was at the mast helping him out. The furling drum, which holds the J2 to the deck and is a fixed stay sheared, the main steel pin in the drum sheared, and so because they were in the middle of changing from the J1 to the J2 there was only one forestay up at that time, for that brief period. That meant the furling drum was unsupported. Alex said that it was like slow motion from there, the mast fell backwards into the water and rested on the stanchions and the daggerboard. At that point the mast broke. And it was gone pretty much immediately. It did not break on the way down. It ended up sitting half in the boat and half out and at that point it broke. There is none of the mast left." 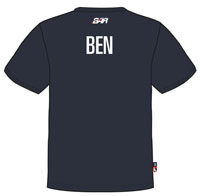 Henri Lloyd will be offering a kit personalisation service at the show, so you can add your name to the products - just like the BAR Sailing Team - and take it home with you on the day.

The range will be on sale from 9th Jan on the BAR stand (F002) at the Show, and online ( www.henrilloyd.com/BARshop ).

Fort Lauderdale To Key West Race
All IRC Class boats have now finished, and Steve and Heidi Benjamin's Spookie is the preliminary winner. Spookie had the best start of the 40th Annual LYC/STC Ft. Lauderdale to Key West Race, and turned that into a razor-thin corrected time margin over Line Honors Winner Rambler 88. George David's JYD 88 had an amazing first race, leaving the rest of the fleet far behind. Rambler may have arrived in Ft. Lauderdale with seconds to spare before the start, but she arrived in Key West just nine seconds too late.

The Carkeek 40 hit the starting line hard, with full-on speed and clear air, and was pushed throughout the race by Chessie Racing and Privateer. That nine second margin may well have come from the start, when Rambler took a few moments to really get going. Spookie Skipper Steve Benjamin estimates that the crew did upwards of sixty gybes during the race. Rambler's track showed them taking some long hitches offshore, any of which could account for more seconds than it took you to read this sentence...and decide the outcome of the race.

With one day remaining to finish the World's off, Burling showed nerves of steel and control to score a second in Race 9 and then won the remaining three races sailed in shifty south-westerly winds on Port Philip. Winds ranged from 15-20 knots with puffs over 25 in the last of the day.

Britain's Glen Truswell and Sam Pascoe have locked in the 2015 International 14 World Championship title with a day to spare after another superb display of confident racing on Geelong's Corio Bay.

Not satisfied with finishing with a safe fifth place, they stormed into first place in Race 6 and into the class history books.

"We woke up this morning knowing we had just two races to go and we needed to get a fifth or above in either race assuming Ben (McGrane) won both. We got down to race to find perfect conditions," Truswell said.

As Truswell and Pascoe pulled their boat up the ramp at Royal Geelong Yacht Club and were greeted with a champagne spray and cheers from their supporters, Truswell showed obvious relief at returning to shore the newest World Champion. "All young boys in England growing up and learning to sail, dream of coming down-under to win a skiff event. It means so much to have done it," Truswell said

The team sailed a conservative race playing the pressure and wind shifts to just finish a few boat lengths ahead of Brad Devine and Ian Furlong (AUS).

* The final race of the 2015 I14 World Championships plays out today on Corio Bay, Geelong, with second and third place still to be decided.

The competitors have been put on notice that they should watch the AP flag as PRO Ross Wilson and his volunteer race management team, heads out to the course area to view the conditions and make a decision on today's race. A strong north-westerly, gusting in the high 20s, continues to pump in across the bay.

It's amazing to think how sailing has changed since Dubarry started making boots in 1937. The first marina arrived in the 1930s but there were no plastic boats to park in it before the 1940s. There was no yacht radar before the 1950s, nor marine diesel engines before the 1960s, also when polyester sailcloth ousted linen and cotton. The 1970s brought instrumentation and the 1980s saw Decca come and go as GPS stole the show. Oiled canvas gave way to PVC, which yielded to GORE-TEX®. Much indeed has changed, yet one thing has stayed the same: nothing signifies a confident, experienced, discerning yachtie like a pair of Dubarry boots.

Developed as a more luxurious, classical and traditional interpretation of the legendary Shamrock, on which the company's reputation was built, the Ultima is Dubarry's flagship boot. Its sole delivers award-winning, sure-footed grip. Its GORE-TEX® liner is waterproof and breathable to keep you warm, dry and comfortable. Its Dry-Fast-Dry-Soft water-resistant leather weathers with grace and distinction, recording every nautical mile of your experience in the gentle, tanned folds of its sumptuous hide. It's clearer than ever that, though times may change, quality always lasts.

50th "Thrash To The Onion Patch" To Race Under One Rule
When the Newport Bermuda Race is next sailed in 2016, it will be scored by one handicapping system, the Offshore Racing Rule (ORR).

The ORR calculates each boat's speed potential based entirely on its measurements, using a Velocity Prediction Program (VPP). The ORR has been used in the Newport Bermuda Race since 2006, following many years of handicapping under other VPP systems.

The "50th Thrash" will start on June 17, 2016, off Castle Hill, at Newport, R.I. In the most recent Newport Bermuda Race, in 2014, 164 boats sailed in divisions for racing-cruising boats, cruising boats, doublehanded boats sailed by two sailors, and Grand Prix racing boats with professional sailors.

They then proceeded to take a grip of the third leg to China with Dongfeng leading from an early stage and Bekking and Walker heading the chase, swapping second and third places along the way.

But Thursday's early position reports had a new look to them with the Spanish boat MAPFRE taking advantage of a little more pressure to slip into second spot, a whisker ahead of both Abu Dhabi Ocean Racing and Dongfeng Race Team (0940 UTC).

Team Alvimedica (Charlie Enright/USA) are not out of contention either, with less than 5nm separating second to fifth places with Dongfeng still looking in very good shape just under 66nm ahead overall.

The fleet was passed in the Bay of Bengal - several miles ahead - by the Maersk Line ship bearing the stricken Team Vestas Wind (Chris Nicholson/AUS) as it headed towards Genoa, Italy from Malaysia. It is scheduled to arrive on January 25. From there the boat will be transported by race logistic sponsors, GAC Pindar, to builders yard Persico in the Italian city of Bergamo, for a rebuild ahead of a planned return to the race in June, for the final two legs

The success of the European sailing leagues has been a source of inspiration for founder Benjamin A. Klatzka, who says he will someday be able to include a national sail-off in the mix. He is working with a Board of Advisors comprised of experienced sailing industry professionals for advice on how to best build the Premiere Sailing League and will be sharing details with the public over the coming weeks and months.

Each of the Premiere Sailing League teams will be made up of four sailors representing yacht clubs and sailing organizations. Sailing will be conducted in J/70s.

Changes made at the 2014 ISAF Annual Conference affect the 2014-15 edition of the regulations. Unless otherwise specified the amendments are effective 1 January 2015.

It should be noted that national prescriptions may take priority over the ISAF text and you should check with your relevant authority.

Staveley was an ISAF International Judge from 1982 to 2007 and during that time served on international juries all around the world.

Staveley was a founding member in 1987 of the Royal Yachting Association's National Judges Sub-Committee and served as its chairman from 1992 to 1999. He was one of the first International Judges appointed by the then IYRU in 1982 and retired in 2007.

In recognition of his services to yachting in general, and on the River Clyde in particular, he was an Honorary Member of both the the Royal Northern & Clyde Yacht Club (of which club he has was a past commodore) the prestigious Mudhook Yacht Club and the Royal Gourock Yacht Club. He was a past president of the British Flying Fifteen Class Association, chairman of RYA Scotland and served on the main RYA Council for two four year periods.

Queen Elizabeth II honoured Staveley by making him a Member of the Most Excellent Order of the British Empire for services to sailing in 2000 and the Royal Yachting Association made him a Judge Emeritus in 2005.

The Last Word
Christmas to a child is the first terrible proof that to travel hopefully is better than to arrive. -- Stephen Fry