Barcelona World Race
If during the pre-start hours in Barcelona there were fears that one Barcelona World Race duo might conjure up a breakaway in the opening days, so far such worries remain unfounded. Among the 'three musketeers' who are making the pace - albeit at speeds of an Sunday promenade today - there is still very little to choose between them.

The small advantage is back with Hugo Boss,Alex Thomson and Pepe Ribes, but Cheminees Poujoulat, Bernard Stamm and Jean Le Cam, and also Neutrogena, Guillermo Altadill and Jose Munoz have all had the lead during the last 24 hours and boat speeds in the very light downwind conditions remain very similar.

The British-Spanish duo on Hugo Boss only just have their nose in front by a matter of a few miles this afternoon. Seven miles to their west and a little behind are the Swiss-French skippers and a similar distance to their east are Neutrogena, the Spanish and Chilean pair.

In the grip of the light winds caused by a prevailing zone of high pressure, the trio are balancing the chance to work the best of the small pressure differences with a likely desire to stay in contact with the group.

* A new record for the 538-mile opening passage from Barcelona to Gibraltar was set by Alex Thomson and Pepe Ribes when they exited the Mediterranean on Hugo Boss on Thursday evening, leading the Barcelona World Race. But their passage into the Atlantic proved problematic when they then hit two unidentified objects and hooked a net around their keel in strong winds and muscular seas.

Hugo Boss marked a new race time to Gibraltar at 2 days 5 hrs 50 mins, reducing the 2011 record of Jean-Pierre Dick and Loick Peyron by 26 hours and 5 minutes.

Between joy and frustration there were only a few hours. It was actually going quite well and after half of the series, we were on the third overall close to the leading teams from Greece and Australia. On the last day of sailing in 2014 it was even better with the places 1-2-4. However, the new year started not so nice...

In race 8, shortly after the start, an Australian team crashed into the back of our Tornado and took both rudders away including the fittings. Also we got a big hole in the stern of the boat. It was a disaster. We were completely shocked and thought we might sink. Fortunately, the club was only a few hundred meters away from the race track and we could just pull our boat ashore.

The protest hearing we won... [but not the redress we wanted]. The repair of the boat into the night cost our last nerves and forces. We made it, thanks to many great helpers in the Nedland Yacht Club and Windrush Composites. We made it to the start of the final race, where sailed to a first and second.

Basically we had many top scorings and we were very close to the favorites. However, with the crash and the special jury decision we had no chance to win the overall ranking. -- Roland Gaebler

Fox's Marina & Boatyard has an opportunity for a sales-orientated individual with an extensive knowledge of rigging, deck gear and related systems.

Located in Ipswich on the River Orwell, Fox's is the most comprehensive service centre on the UK's east coast. With well-established workshops for rigging, marine engineering and electronics, stainless fabrication and all general repair and refit work, Fox's provides a complete range of services to power, sail and commercial customers.

The successful candidate is likely to be an experienced yachtsman with keen commercial aptitude, excellent customer relationship skills and a very good level of computer literacy.

A competitive salary package is available for the right candidate.
Please apply in confidence to:

Team Vestas Wind: We'll Be Back By June
Team Vestas Wind has announced bold plans to rebuild their badly damaged boat and return to the Volvo Ocean Race by June.

Skipper Chris Nicholson (AUS) told a news conference on Friday that the condition of the boat had built confidence that it could yet be fixed and returned to competition before the 12th edition of offshore racing's toughest event is completed in Gothenburg on June 27.

"We got the boat off the reef in better condition than we thought possible," he said. "There are large portions of the deck that can be reused - 70 to 80 per cent - and a lot of other components within the structure. We'll rebuild our boat just as we rebuild our hopes and dreams."

The aim is to return the boat to the now six-strong fleet in Lisbon ready for the Leg 8 start on June 7.

Team Vestas Wind CEO Morten Albæk has told his skipper that the ultimate plan will be not just to return for the eighth leg start from Lisbon to Lorient but give the six other boats in the fleet a run for their money after that.

Team SCA led virtually from start to finish to romp to a convincing victory in the Volvo Ocean Race In-Port Race in Abu Dhabi on Friday after a lack of wind nearly forced a postponement.

The third race in the series began 1hr 40mins behind schedule - another 20 minutes and the action would have been scrapped for the day - because of the missing breeze.

Finally, at 1540 local time/1140 UTC, race officials judged that the breeze had picked up enough for a viable race and the women of Team SCA never looked back.

They took a starboard course early on and by the first mark in the 3.2-nautical mile (nm), two-lap race, had established a 50-metre lead and they continued to build on it from then on with a display of consummate in-port sailing.

In the end, it almost looked easy as the Swedish-backed boat crossed the line, 1min 28secs ahead of second-placed Team Brunel (Bouwe Bekking/NED).

Abu Dhabi Ocean Racing, who won the corresponding race here three years ago, again finished on the podium in third, 43 seconds further behind.

Going into the final day, the fleet needed two more races to get in a valid series, so there was audible relief as the sailors arrived on Sunday morning to a sailable 15-20 knots on the bay. The day started damp and grey, following the overnight storm and rain, but by the second race the sky was clear and the sea breeze was pumping. The strong winds of Saturday had also left a large confused sea behind, but this soon moderated along with the wind.

After a week of drama and waiting, the event then had a poetic ending. Black Rock YC Commodore, Andre Blasse (AUS), had spent the previous two years organising this championship, and dominated the final race to win by a massive margin. It was a very popular win.

The 12ft Skiff Interdominion is shaping up to be a humdinger between two Australian and two New Zealand entries, with the Aussies getting the upper hand today, including the Brett Hobson skippered Geotherm staging a comeback to move up to second place, but it's Sydney Sailmakers, steered by Nick Press which has a target on its stern.

Brett Hobson/Brad Phillips aboard Geotherm stayed cool under pressure in the 15-17 knot nor' easterly of Race 2 today, to hold off challenges from the defending champions on C-Tech White, Alex Vailings/Fraser Brown (NZL), Sydney Sailmakers, As Good As It Gets, Glenn Armstrong/Roger Barnes (NZL) and Little Bus (Chris Reid/Andrew Clarke (NZL).

In the end, it could not have been closer, as Geotherm pipped C-Tech White by 29 seconds, with Sydney Sailmakers (Nick Press/Andrew Stevenson) grabbing third place on the shortened course which took the 28-boat fleet from the Double Bay start, to Nielsen Park, Shark Island, Clark Island, Nielsen Park to the Double Bay finish.

The 12ft skiffs will enjoy a lay day tomorrow, some plan on taking in the sights of Sydney, while others will work on their boats at Double Bay next to the 18 Footers Footers League at Double Bay and Double Bay Sailing Club, which are playing host to the 12 Foot Skiff Interdominion. -- Di Pearson

Seahorse February 2015
What's in the Latest Edition Of Seahorse Magazine 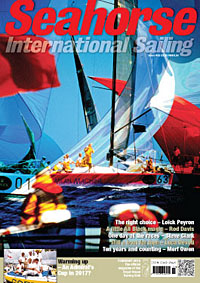 I14 Family Reunite For Geelong World Championships
Photo by Rhenny Cunningham. Click on image to enlarge.

Sixty-nine teams are converging on Geelong for the seven race series being hosted by Royal Geelong Yacht Club on Corio Bay from the 7th to 16th January 2015.

Alongside the home country contingent from all around Australia, there are 24 international teams. They are led by reigning World Champion, Britain's Archie Massey. He is joined by another 11 teams from Great Britain, two from Japan and two from Canada, three from Germany, four from the USA and one from Italy.

The Practice Race is on Wednesday 7th with the racing commencing the next day. The forecast for the start of the regatta is for east, south-east, 10 knots gusting to 16. -- Tracey Johnstone

Their official finish time recorded at the base of Muttonbird Island just inside the harbour was 21:16:45 this evening, Saturday January 3, 2015 giving them an elapsed time of 1 day 8 hours 16 minutes 45 seconds and an average speed of just 7 knots over the 226 nautical mile course.

The Botin design launched at the end of 2013 is capable of speeds in excess of 30 knots. For the boat's debut Coffs race the promised fresh nor'easters only teased, turning the usual dash into more of an amble. The most wind Beau Geste encountered was an 18 knot sea breeze this afternoon.

About Time equalled the record for the most IRC overall wins, joining Bob Oatley's Wild Oats X on the honour board.

IRC is one of the three handicap systems owners opt to compete and be scored under for the annual coastal classic. The other two are ORCi and PHS.

Farren-Price's Cookson 12 from the CYCA in Sydney is both the official IRC and ORCi overall winner ahead of Rob Hanna's TP52 Shogun V. The TP52 is on its way back to Geelong, a 780 nautical mile delivery to the owner's home port for the next event on the program; the Festival of Sails later this month.

On corrected time About Time beat Shogun V by 33 minutes under IRC over the 226 nautical mile race and on ORCi results the gap is greater wider at 51 minutes.

PHS results are decided and the lovable Queensland veteran of the sport, Robbo Robertson, at the helm of his own design, a Robertson 950 called Corrobboree has taken top honours from Stephen Dadour's Dehler 41 Solutions and Sandor Tornai's Espresso Forte. -- Lisa Ratcliff