A panel, to be chaired by Rear Admiral Chris Oxenbould (Rtd), is to provide the Volvo Ocean Race with its final report by January 31, 2015.

Volvo Ocean Race intends to make the report publicly available to make sure its learnings benefit the whole sailing world and not only the race. This is scheduled for no later than during the Auckland stopover (February 27-March 15).

Rear Admiral Oxenbould is a former deputy chief of the Australian Navy and an experienced ocean racing yachtsman with a particular expertise in navigation. He is also the chairman of the Yachting Australia National Safety Committee.

Ocean navigational expert, Stan Honey who won the Volvo Ocean Race 2005-06 as navigator onboard ABN AMRO ONE, and Chuck Hawley who serves as the chairman of the U.S. Sailing Safety at Sea Committee, will assist the Rear Admiral Oxenbould on the report.

This ranking rewards the attendance and regularity of the results throughout the season.

In order to enhance the performance of the skippers evolving on first generation boats, a classification Vintage 2015 is currently being discussed.

SK2 - On Display
The SK2 can be seen on the water this winter in the GJW Sail Juice Series. It is starting to post notable results with a 2nd overall at the Datchet Flyer.

Irish Match Racing Open
The much anticipated Irish Match Racing Open has been succesful writes Diana Kissane albeit strong winds on Sunday curtailed the running of a full programme. With 7 domestic teams and 3 UK entries the event attracted some of the top sailors of the British Isles including a host pf sailors competing on the premier mens and womens world tours, former and current national champions. An incredible 36 races were sailed on Saturday between dawn and dusk without a minute being wasted, with the fancied runners establishing a clear lead. With the lead boats all having raced each other, it was possible to obtain a clear result.

Given Sunday's forecast, it was decided to attempt to run semi finals and finals.

Teams Lees, Vose, Grant and O'Leary went to sea to battle it out but after an hour or so returned with conditions having prevented the run-off.

There are plans in motion for open training sessions and mini reggattas to take place in January. 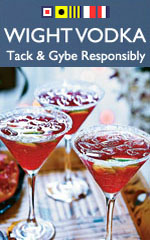 The King & Queen in Hamble continue to hold the lead in our annual voting competition, with mid month surges from Pier View (Cowes) and the Royal Bermuda Yacht Club.

While you make your choice, we recommend this festive libation:

Combine sugar and 1/4 cup water in a small saucepan; bring to a boil. Reduce heat, and simmer 2 minutes or just until sugar dissolves. Remove from heat; cool.

Now.. convince yourself that the presence of pomegranate juice and the scurvy-fighting properties of limes makes this a very healthy drink. One that you should celebrate repeatedly while considering which of the ten bars in the competion is this year's best.

Zhik Mothapolooza
The 2015 McDougall + McConaghy Moth World Championship is set to be even more of a spectacle this year, with the return of the Zhik 'Mothapolooza' which promises a potential head-to-head with teams of America's Cup and Olympic sailors.

The event will take place alongside the Moth Worlds in Sorrento, on the Mornington Peninsula in Victoria, between10-16 January 2015.

This year, the Zhik Mothapolooza has evolved into a unique two-event series for individuals and teams, all devised to test the competitors' innovative foiling skills and boat handling to the extreme.

An individual event, 'How Slow Can You Go' is a test to find the 'slowest foiler' sailing between two points. You read that right - the slowest! Competitors will sail at 90 degrees to the wind over a straight 100 metre course.

Whichever sailor takes the longest time while still keeping their boat foiling at all times, without tacking or gybing, will be the winner! Anyone who has tried foiling for themselves will quickly recognise just how difficult this test will be.

The team event will be the World's first foiling 'Sailing Relay Race'. Teams of four, many of whom are Olympic and America's Cup sailors will have to pick up, carry and deliver a baton to a floating bucket, then get out of the way so the next team mate can grab the baton and head back in the opposite direction.

OK Dinghy Worlds
It may be the last world championship of 2014, but it is certainly not the least. The 2014 OK Dinghy World Championship opens at Black Rock Yacht Club on Port Phillip Bay in Melbourne, Australia, on December 28th and so far there are around 80 entries, with perhaps a few more before registration closes.

This 52nd OK Dinghy World Championship will be the third time that Black Rock YC has hosted the event, following 1982 and 1990. Traditionally the class brings its world championship 'down under' once every four years and this is split between Australia and New Zealand, so Australia only gets to host the event every eight years, and they are making the most of it with half the entries coming from the host nation.

One of the main favourites will be the host club's defending World Champion Roger Blasse (AUS). He took his second title last year in Thailand, so a third at his home club would be a significant achievement.

Last week's Sail Melbourne was a good indicator of form with Blasse coming in just one point behind Mark Jackson (AUS), but comfortably ahead of another strong competitor, Mike Williams (AUS), who has taken medals in his last two OK Dinghy World titles

Gurit globally delivers composite materials, engineering, processing tools and equipment as well as parts and solutions to a world-class customer list. We work alongside long standing customers in the vertical markets of Transportation, Marine and Wind with continued focus in emerging markets and product development. It is this focus that enables us to continue to deliver the future of composite materials.

- Developing and identifying innovative and efficient engineering solutions for our customers

To apply for this position or for a full listing of opportunities please visit: www.gurit.com/careers.aspx

He finished first in both his IRC and ORCi divisions in last year's Rolex Sydney Hobart, first in division in both the IRC Australian and used South Wales Championships in April and their team finished first overall in the Southern Cross Cup.

Since its inception in 1985, the Ocean Racer of the Year Award has gone to many of Australia's most notable ocean racing skippers.

She says her final decision will be based on weather and being away from her daughters — Dylan, three, and Harper, four months.

"I think they'd be really proud of me in the future to know that I did it. If there was going to be a time to do it, this crew is full of rock stars so I wouldn't feel any more unsafe than what anyone would in a ginormous ocean. It really is weather dependent and I'm not going to go if there is any risk at all."

Hinze-Clark's 70-year-old husband, Jim Clark, has ruled himself out of the race because of arthritis in his wrists and ankles.

However, Clark is supportive of his wife taking part in the race and will be at the start and finish line.

"Anything I can do, she can do better," he said.

The Clarks' 100-foot ocean racer Comanche is the latest in their fleet of boats.

A total of 118 boats will take part in the 628-nautical-mile race starting on Boxing Day.

Clark, 70, is the founder of computer services company Netscape as well as being a big investor in Apple, Facebook and Twitter.

Restoration work will begin this month, honoring the Mayflower II's original construction and using traditional methods with the goal of restoring the ship to her original state when she arrived to Plymouth in 1957.

* From Owen Sharpe: The same Scuttlebutt that tells me extra funding is available to sailors in NZ on their way to Rio tells me also that if they get there they'll sail on "super-bug" infected waters. Can't wait. Rio is starting to make the Americas Cup look attractive.

The Farr 40 One Design was conceived as a high performance 40 footer that would gather the benefits of modern materials into an economic platform for short course racing that was demanding, exciting and not beyond the capabilities of relatively inexperienced crew members. The boat also had to be capable of competing in the offshore classes and be a competitive IMS performer to give the purchaser a wide range of events in which to compete and to carry through times before class fleets were established. The design of the boat and the formation of Class Rules and Constitution proceeded in parallel allowing input from the operator and builder side of the equation. The Owner/Driver class rule was an influencing factor in the conceptual phase of the design, encouraging us towards easy to tune, simple arrangements that would not take time and energy from the primary activity of sailboat racing.

Virago has been maintained in excellent condition by a caring owner. The included sails, trailer and tow vehicle make Virago an ideal boat for a new owner. The boat has been stored inside a heated facility when not in use.

The Last Word
What's the point of wearing your favorite rocketship underpants if nobody ever asks to see 'em? -- Calvin