Voting Is Open In The Wight Vodka Favourite Yachting Bar Competition
The top ten are ready for your review and vote.

Dutch Master Class
Bouwe Bekking (NED) and Team Brunel found a very timely change of gear to sweep past Dongfeng Race Team and edge to a 16-minute victory in an incident-packed Leg 2 of the Volvo Ocean Race on Saturday.

The wily Dutch campaigner, competing in a record-equalling seventh race, looked likely to have lost out in a thrilling sprint to the finish in the 5,200 nautical mile second stage with some five hours to go.

Suddenly, Team Brunel found an extra surge of wind pressure to sweep past Charles Caudrelier's (FRA) men even though the boats were only a couple of hundred metres apart and before long they were a mile clear.

Bouwe and his equally experienced navigator, Andrew Cape (AUS), have too much know-how to let an advantage like that slip and for the second leg running, the Chinese boat was forced to settle for runners-up spot.

In the first leg from Alicante to Cape Town, they were pipped by 12 minutes by Abu Dhabi Ocean Racing (Ian Walker/GBR). This time it was 16 minutes, an agonisingly small distance after more than three weeks at sea. Team Brunel's final elapsed time was 23 days 16 hours 25 minutes and 20 seconds.

There is consolation, though, for Caudrelier and his crew. Their second runners-up spot leaves them equal on points at the top of the standings with Team Brunel and Abu Dhabi Ocean Racing, who were easing in for third place.

Some of the day's highlights on the Stadium course included Tom Burton's trifecta of gold medal Laser wins at this World Cup event, the Australian identical twins out-sailing the Portuguese brothers in the 470s and the final epic Finn grudge match between Great Britain's Ed Wright and Oli Tweddell that went the Brit's way.

Racing began in cool and gusty southerly 15-20 knot winds on Port Phillip Bay and similar to yesterday's first round of Medal Races dialed back to light and patchy.

With the breeze cranking around Sydney Harbour at 15 knots and the brilliant Aussie sun beating down, racing was as good as it gets and the thousands of spectators witnessed not only the best racing of the year, but also a capsize for their home team GAC Pindar in the sixth race of the day, when damage to their rudders following a collision caused them to lose control of their Extreme 40.

Coming into the Act, Morgan Larson, Stuart Pollard, Pierre-Yves Jorand, Nils Frei, Yves Detrey and Anna Tunnicliffe, were the hot favourites to win the Series - with four Act wins already under their belts and having never finished worse than third - they just had to play it safe and finish sixth or above.

The eighth season of the Extreme Sailing Series comes to a close after 231 races, with the 2015 global tour confirmed to kick start in just over seven weeks, in Singapore - the first of eight Host Venues

An Absorbing Interest. The America's Cup - A History

Revised limited edition signed by the author. Now down to the last 37 copies... for the sailor on your gift list who seemingly has everything... a very unique gift.

This coveted  2-volume slip-case edition has become a collector's item as important to the history of the Cup, as Lawson's original 'History of the America's Cup' published in 1901.

There will be no reprint: the remaining copies are the final ones for sale.

These two beautifully designed tomes chart the history of sailing's most enigmatic and greatest prize, covering  the dramas, designs, and personalities from the first race around the Isle of Wight in 1851 to 2003 in Auckland where Ernesto Bertarelli and his largely Kiwi renegade team stole the Cup away to Europe. It is this rich history that has  led to the sheer fascination of what has become the oldest international sporting event. Heavily illustrated with rare etchings, lithographs, line drawings, paintings and pictures, all chosen to complement the text, this collector's edition charts every Cup match in great detail and can rightly claim to be a definitive history.

The perfect gift for all those fascinated by the Cup

"This is the Bible of the America's Cup." Bruno Troublé - Louis Vuitton

Star Class: Commodores Cup
Coconut Grove, Florida: There is nothing like coming out and winning the first race on the last day. It makes the rest of the day a lot easier.

There was barely 4 knots of wind for the start of race 1 today. Brian and I started in port tack, at the committee boat, hit the right corner, and never looked back. There were a few tricky moments on the first run, in 4 knots of wind, but we managed our position well. For the second lap, the breeze built to 6 knots and steadied out a bit which made out lives easier. Our competitors were back in the fleet a bit which was nice for us.

So for the last race, we just needed to stay in the same area as Whipple and Vasella so as to not give them a chance to put big points on us.

Brian and I were actually going pretty fast so with another good start, we managed to be ahead of them the whole last race and that was more than enough to get us the win for the regatta. Larry Whipple with Brian Fatih finished second Peter Vessella with Guy Avellon third, Arthur Anosov with Dave "Julius" Caesar 4th and Augie Diaz with Arnis Baltin 5th.

I am appreciating how very lucky I am to be, down here in Miami, sailing Stars in 75 degree temps and sunshine. That said, I plan on doing it again the second week of January when the Star Winter Series continues with the Bob Levin Memorial and then the mid winter championship. -- Paul Cayard

Seahorse Sailor Of The Month 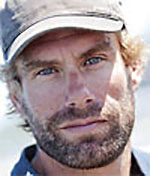 Iain Percy (GBR)
'Olympic gold (twice), America's Cup team leader and a friend for more than life to Bart... No one could be more deserving' - Alistair Skinner; 'Intelligent, articulate and ultra competitive - the complete package' - Simon Wilder; 'A genuine champion' - Chris Mason; 'Bart's Bash was a wonderful idea, but it was in its execution that Percy's team showed real class' - Marc Turner; 'One of the very best in the world' - Wolfgang Schaefer. 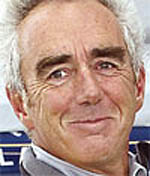 Loick Peyron (GBR)
Legend is too small a word! Peyron was quietly preparing for a ‘tribute’ entry in the Route du Rhum on his own little yellow trimaran Happy - a sistership to Mike Birch’s original race winner Olympus. Then came a call from Banque Populaire asking him if he would again step up to the plate, not with the combination’s Jules Verne giant but the former Groupama 3. Thereafter it was just veni, vidi, vici... 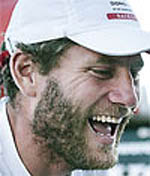 Charles Caudrelier (FRA)
The performance of the Chinese Volvo entry Dongfeng in harrying Leg 1 winner Abu Dhabi Racing all the way into Cape Town was impressive on any number of levels. However what we are tipping our hats to is the brilliantly positive way in which Caudrelier took on the task of moulding a multinational team of patchy experience, shaping them into such a formidable squad. And are the best times yet to come?

Based in Barcelona, Alfred Farre has been a professional nautical photographer since 1984. Official photographer of the Barcelona World Race between 2007 and 2010, he also covered the Palamós International Christmas Race for fifteen years. His picture shows the classic yacht Mariquita, widely regarded as one of the most beautiful classic yachts, pounding into a wave during the VII Puig Vela Classica Barcelona 2014.

Ireland Gets &Euro;2m Olympic Boost
Ireland's 2016 Olympic ambitions have received a €2 million cash injection that will allow sports to fund acclimatisation camps, meet competition costs and, in some cases, provide extra equipment for athletes targeting the Games in Brazil.

Minister for State for Sport and Tourism, Michael Ring, announced the extra funds yesterday, as well as a grant of €80,000 which will allow Special Olympics Ireland relocate from rented accommodation to the Sports Campus at Abbotstown.

The first €1m set aside for camps follows on from similar grants awarded a year out from previous Olympic Games and has already been dispersed to 18 organisations of whom Paralympics Ireland, with €188,154, were the largest recipients.

That money will fund a camp at their pre-Games base in Uberlandia, Brazil. Athletics Ireland (€138,008) and Swim Ireland (€30,765) are funding team camps in Florida while the Irish Sailing Association (€70,000) will have a team base in Rio itself. -- Brendan O'Brien in the Irish Examiner

Not Sailing But Very Cool
CERN today announced at the 174th session of the CERN Council that the Large Hadron Collider (LHC) is gearing up for its second three-year run. The LHC is the largest and most powerful particle accelerator in the world and the whole 27-kilometre superconducting machine is now almost cooled to its nominal operating temperature of 1.9 degrees above absolute zero. All teams are at work to get the LHC back online and the CERN Control Centre is in full swing to carry out all the requested tests before circulating proton beams again in March 2015. Run 2 of the LHC follows a 2-year technical stop that prepared the machine for running at almost double the energy of the LHC's first run.

"With this new energy level, the LHC will open new horizons for physics and for future discoveries," says CERN Director-General Rolf Heuer. "I'm looking forward to seeing what nature has in store for us". 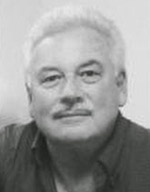 Hamilton, Bermuda: Family and friends are grieving the death of well-known sailor David Ashton, who passed away on November 21. He was 62. Mr Ashton died from complications following surgery in a Boston hospital.

He was a veteran of multiple Newport Bermuda Races, including the 2012 race aboard the Spirit of Bermuda. He was also co-founder of the local J/24 fleet in Bermuda and represented Bermuda at the J/24 World Championships in the United States.

In the 1970s, Mr Ashton owned a boat rental company and also operated a performance keelboat sailing school, using J/24s as the design of choice. More recently, he was a member of the International One Design Class of Bermuda and owner of the IOD sloop, Slingshot.

At the time of his death, Mr Ashton was joint-owner and manager of Greenbank Guesthouse in Paget.

EX ROXY is a pedigree of her kind. She has competed in all VENDEE GLOBE races and she held for several years the East to West single handed record around the world. She has been completely upgraded in 1998 under the supervision of the designer Marc LOMBARD. This included canting keel and many improvements. She has been completely overhauled for the 2004/2005 VENDEE GLOBE. Many successful and famous sailors have sailing on board : Philippe Poupon, Bertrand de Broc, Philippe Monnet, Simone Bianchetti, Mich Birch and Anne Lyardet.

The Last Word
Dear Alcohol, we had a deal, you were going to make me funnier, sexier, more intelligent, and a better dancer. I saw the video, we need to talk. -- Anonymous