Esimit Europa 2 Take Line Honours
The expected frontal system arrived around Midnight last night at the northwest corner of the course. Reports of storm force winds and big seas have been received by the Race Committee and 17 yachts had officially retired from the race by 11:00 CET on Wednesday 22 October. The Race Committee has received no reports of any injuries to crew from the fleet.

Last night, the 100ft canting keel Maxi, Esimit Europa 2, skippered by Jochen Schumann, was outside record pace for the course but this is the fourth time Esimit Europa 2 has taken Line Honours for the Rolex Middle Sea Race and that has never been achieved before. Royal Malta Yacht Club Commodore, Godwin Zammit, presented Esimit Europa 2 with their fourth line honours flag.

Lee Satariano's Maltese J/122, Artie has emerged as the hot favourite to become the overall winner of the 2014 Rolex Middle Sea Race. However, at 16:00 CET, Artie was still 80 miles from the finish and the Mistral storm is still raging. In addition, there are several yachts behind Artie that could still claim the overall prize.

Doldrums Lottery
While the rest of the seven-strong fleet were left some 90 miles plus in their wake, searching for the gusts which would finally propel them back into contention, skippers Ian Walker (GBR-Abu Dhabi) and Bouwe Bekking (NED-Team Brunel) were powering clear towards the island of Fernando.

They still have just over half the 6,487 nautical miles to complete the opening leg between Alicante and Cape Town but the experienced pair already look to have made this a two-boat sprint to the finish come the first week of November.

For Team SCA's British navigator Libby Greenhalgh, it was a particularly frustrating night after the women closed a large gap on the rest of the fleet of around 75 miles by Tuesday only to fall back again once they too hit the Doldrums.

Bekking, the 51-year-old Brunel skipper who is competing in the Race for a record-equalling seventh time, knows all about the frustrations of trying to 'race' through the Doldrums when the winds and fates seem stacked against you - or rather are just not there.

"Throwing the dice we hate. We prefer to act on facts and figures. But then I can reflect as well that sometimes 'luck' is with you and sometimes against. But in the end it will even out."

It also helps to have a navigator on board with the towering experience of Andrew Cape (AUS), as Bekking does, or Simon Fisher (GBR) on Abu Dhabi Ocean Racing.

Williams tried to cross Francesco Bruni (ITA) Luna Rossa in a close match and failed to make it. Bruni's bow roller caught William's backstay and the two boats twirled away locked together for what seemed like an age. Both skippers were penalized 1/2 point for the incident. Williams leads Group 1 going into flight 6 on Wednesday.

Taylor Canfield ((ISV) US One, top seed in Group 2, has 3 points. He is joined there by Eric Monnin (SUI) Swiss Match Racing Team and Staffan Lindberg (Fin) Alandia Sailing Team

Sailing starts again on Thursday at 9:00 ADT with more Qualifying matches. The forecast for Thursday calls for winds of 18 to 22 knots in the morning decreasing to 12 to 18 in the afternoon. Isolated showers and a risk of thunderstorms throughout the day.

Seahorse November 2014
What's in the Latest Edition Of Seahorse Magazine 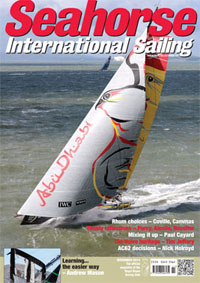 World news
It's all change at the Tour Voile as the event goes multihull (much to the approval of Francois Gabart), a look at the extraordinary 'Ultime' line-up in the 2014 Route du Rhum, a stirring tale of courage and calm from the Tasman, an epic 31st Hamilton Island Race Week and something a little better than PHRF. Blue Robinson, Ivor Wilkins, Patrice Carpentier, Dobbs Davis

Giles Scott Makes Star Debut in the SSL Finals 2014 at Nassau
Nassau, Bahamas: The list of champions taking up the invitation to the second Star Sailors League Finals, organised by the Nassau Yacht Club for December 1st to 7th 2014, is getting longer by the week.

After the recent announcement of the first 12 competitors, who gained automatic access to the SSL Finals because of their positions in the Skipper Ranking, and the first guest star, London 2012 gold medallist, Freddy Loof, it is the turn of the very young but also very promising Giles Scott. Now virtually a certainty for the British Olympic squad, the rising star is also seen as a natural successor to Ben Ainslie who has retired from that side of the sport to devote himself full-time to the America's Cup.

Unbeaten in 2014, Scott repeated his brilliant double of 2011 this year to become both Finn European and World Champion.

Byron Kokkalanis (GRE) had wrapped up gold in the Men's RS:X the day prior but intriguing battles for gold across the remaining fleets played out in a tense day of competition.

The stakes were high with Qingdao medals on the line, a share of the prize money and invitation places at stake for the ISAF Sailing World Cup Final set to be held at the end of November in Abu Dhabi, United Arab Emirates.

Next up for many of the racers is the ISAF Sailing World Cup Final in Abu Dhabi, United Arab Emirates from 26-30 November.

Cowes Etchells Winter Series
Cowes Etchells winter series was reduced to just one day, Sunday 19th October, Saturday the 18th had a horrid forecast so racing was cancelled on the Friday night, but for the few who did venture out onto the bramble bank on the Saturday sailing the conditions were not ideal, in fact rather strange with 20 degree jib backing wind-shifts, the racing was unlikely to have been great.

But 9 teams made it to the starting line on the Sunday morning and were greeted by 17kts gusting 22, that gradually increased to 22 gusting 26, from a SSW direction over an ebbing time that made for a slight to moderate sea state. Three races were sailed.

Sailing in Etchells for many of the fleet continues in Hong Kong and Miami over the winter, before racing starts again in Cowes next April. -- Rob Goddard in Yachts and Yachting:

The biggest team racing event in the world was held at Oxford Sailing Club, Farmoor Reservoir, with 23 Junior (under 16) teams and 27 Youth (under 19) teams competing for championships honours.

Following a full day's racing on Saturday with 10 rounds completed on both the Youth course with Fireflies and the Junior RS Feva course, standings started phenomenally close on the Sunday. The Youth fleet saw 11 of the 27 teams fighting for seven places that make up the Gold A Fleet, while there were three teams in the Junior fleet who had all lost only one race each.

However, with Sunday bringing gusts of up to 42 knots, racing soon came to a close at lunchtime after only one more round of stage one was possible, resulting in the event winners being decided from the final standings in the round robin stages.

The full ISAF World Sailing Ranking lists, results from all ISAF Graded events, lists of Graded events throughout the year, Ranking release dates and the method of calculation for the Rankings can be found on the ISAF website at www.sailing.org/rankings

The winners of last year's regatta, Aberdeen 1, followed by Deloitte Blue, with Red Funnel M&G 1 in third, have already expressed an interest to participate.

A daily prize giving will be held in Sunsail's hospitality area in the lively Cowes Yacht Haven and the overall Challenge champions will be awarded the perpetual Finance Challenge Trophy on Friday 14th August.

* From Euan Ross: The Volvo Tracker - correction: This stuff drives us all nuts, but bear with me. If you have updated to 64 bit Chrome as I have just done, the Volvo Tracker's Unity Web Player download link delivers incompatible software. It simply does not work, as an earlier correspondent noted. You have to download a different 64 bit Unity Player (run an internet search for this) and then restart your long-suffering computer. Then the cumbersome process works as we have suggested. Now let's get back to the sailing!

Want to have TP 52 fun for a fraction of the price then this is the boat for you!!!

Very fast and sable boat, easy to sail with a small crew. The combination of Genaker, Code 0 and Spinaker extends the possibilities of this sportsboat very much and delivers tons of fun.

The Last Word
Tell me who admires and loves you, and I will tell you who you are. -- Antoine de Saint-Exupery