Anna Kjellberg faced Trine Palludan in the petite finale, and the Swede secured her podium place in Busan with two straight wins over the fellow Scandinavians of Team Ulrikkeholm:

100 Foot Limit Raised For 2015 Rolex Fastnet Race
The 100 foot (30.47m) LOA monohull limit set by a number of the classic 600 mile races such as the Fastnet, Sydney Hobart and Middle Sea races has been lifted by the Royal Ocean Racing Club and the Royal Malta Yacht Club for the 2015 editions of the Rolex Fastnet and Rolex Middle Sea Races. This will allow superyachts participating in the Atlantic Ocean Racing Series to compete.

The AORS consists of four events: the RORC Caribbean 600, the 2015 Transatlantic Race from Newport to the Lizard, the Rolex Fastnet Race and Rolex Middle Sea Race. Superyachts have always been eligible to race in the RORC Caribbean 600 and a number have entered for the west to east Transatlantic Race at the end of June/July 2015, organised by the Royal Yacht Squadron and New York Yacht Club in association with the Royal Ocean Racing Club and Storm Trysail Club.

In previous editions of the Rolex Fastnet Race only monohulls of 100ft or less were eligible to win the coveted Fastnet Challenge Cup. In 2013 there were two monohulls at this upper limit of 100ft: Mike Slade's Farr 100, ICAP Leopard (GBR), and Igor Simcic's RP100, Esimit Europa 2 (SLO).

With a number of superyachts competing in the 2015 Transatlantic Race, such as Elena Ambrosiadou's, 289ft Dykstra/Perini Navi, Maltese Falcon, and Mariette, the 1915 Herreshoff classic, the increased LOA limit for the 46th biennial Rolex Fastnet Race will entice yachts over 100ft to enter and possibly win the Fastnet Challenge Cup, making for a spectacular race from Cowes, Isle of Wight in August 2015.

All Seven In The Fleet Within Striking Distance Of The Lead
All seven Volvo Ocean Race boats have tasted the lead at least once during five extraordinary days of racing since setting off from Alicante at the weekend in sailing which is re-writing the offshore rule-book.

In years past, the fleet would have been well stretched, tens of miles apart, by this stage in Leg 1 between Alicante and Cape Town.

Instead we are seeing close-quarter action more akin to in-shore sailing with hundreds of metres often separating the fleet.

By 1000 UTC on Thursday, Abu Dhabi Ocean Racing still retained a tiny lead over Dongfeng Race Team with Team SCA hot on their heels in third and the rest of the fleet still very much in touch and within striking distance.

It was always suspected that the competition would be close for the 12th edition of the 41-year-old event which is introducing a one-design boat, the Volvo Ocean 65, for the first time. But never quite this tight.

For one sailor, Tony Rae of Team Vestas Wind, there has been precious little rest or comfort after setting out on Saturday from Alicante with a badly bruised - or possibly broken - rib. He is using the bottom of a kitbag to protect the injury after an out-of-control grinder handle hit him in the chest in a practice race prior to departure.

Rae, 53, who is the oldest sailor in the fleet, has made little of the injury. "I didn't want to worry my mum," he explained. 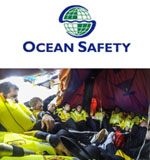 As the Volvo Ocean Race gets underway every crew member will be reflecting on the long road of preparation which has led up to last weekend's big day. Along the way, and probably the most important part of their training, were the sessions that were held by Ocean Safety just a few weeks ago, to familiarise every crew member with the all-important on board inventory of safety equipment.

"Everyone was attentive to this training course," commented Sam Davies, of Team SCA, who participated with her crew. "It's critical that we're aware of the safety equipment on the boats and we know how to use the kit."

Ocean Safety, the UK's largest independent safety supplier, has provided the majority of all the necessary lifesaving equipment to the seven yachts taking part in the gruelling 37,000 mile race, including lifejackets, liferafts, man overboard recovery systems and other vital onboard equipment. Ocean Safety has worked closely with the crew members to ensure that they are all aware of the equipment onboard and familiar with how to use it.

Will Oxley, navigator on Alvimedica has experienced getting into a liferaft for real in the rolling ocean. His experiences are recalled in an interview which intertwines real life with the Ocean Safety liferaft launching sessions in the safety of an indoor pool.

Ben's Olympic Finn Sails Are Up For Auction
Now's your chance to own a piece of sailing history.

Ben Ainslie has generously gifted his three Olympic winning Finn sails to be auctioned, with the proceeds going to the Andrew Simpson Sailing Foundation. All are usable, or just for memorabilia.

All the sails have been put on ebay.co.uk on a 10 day auction.

With 105 boats representing more than 30 different regions and nations, entered across five racing divisions, the international fleet sees everyone from virtual beginners to Olympic Champions racing alongside each other.

The Beneteau 40.7 fleet is always the most hotly contested. Last year the 470 Olympic Champion helmsman from Beijing 2008, Australia's Nathan Wilmot, came to do battle in this hot, one-design fleet. This year his former 470 team mate, double Olympic Champion Malcolm Page is sailing on the crew of Vatti Sailing, a perennial high performer at this regatta, with an all-star crew skippered by Jono Rankine.

Last year's winning boat, Vanke Longcheer, will be among the frontrunners in the 40.7s, along with Beijing Sailing Center skippered by Great Britain's Rick Pointon, who won this division in 2011. Other big names include Corentin Horeau who at 23-years-old is recognised as one of France's up and coming offshore talents, and Mikhail Ermakov, vice president of the Russian Sailing Federation.

Aside from the Beneteau 40.7 division, two other hotly-contested one-design fleets are the SOTO 27 and a new addition - the Fareast 28R. The two handicap divisions are IRC and HKPN. -- Andy Rice, SailingIntelligence.com

Jean Paul de Trazegenies of Peru sailed a great final three races to move into second place. Conner Blouin of the United States was close behind in third.

In all seventy two competitors from ten countries participated in the championship. The provision of new Sunfish sailboats chartered to them by Triton Yacht Sales made for very strong, competitive racing.

The 2014 Sunfish World Championship was organized by the International Sunfish Class Association. This year's championship was held at Camp Sea Gull and Camp Seafarer. The residential camp venue offered a unique opportunity for sailors, their families, coaches and support crew to stay on site.

The 2015 Sunfish Youth World and World Championship will be held in Parracas, Peru next October.

The two day regatta will welcome teams from the Junior and Youth class associations, zones, clubs, schools and individual teams who will commence battle in the two separate events. The Junior fleet will contest in RS Feva's and the Youth fleet Firefly's for teams of three boats (all boats are supplied).

23 teams in the Junior fleet and 27 teams in Youth fleets will take to the waters of Farmoor Reservoir.

Two teams from the south coast were crowned champions at last year's event, with 'Team Oracle' taking the championship title in the Youth fleet and the 'Flying Spinnakers' making their mark in the Junior fleet.

After a short early afternoon delay the sailors headed out onto the water with a shifty breeze and strong current that would once again test them to the max.

Racing is scheduled to commence at 12:00 local time on Friday 17 October.

This will be the largest fleet ever assembled in the 46 year history of the race. The vast majority of the competing yachts have now registered for the race and about 120 yachts, flying the flags of 24 countries, are set to take on one of the world's most awe-inspiring ocean race courses.

In IRC 1, there is the mouth-watering prospect of two of the world's best Maxi 72s going head to head. Niklas Zennstrom's Swedish JV72 RAN V and George Sakellaris' American RP72, Shockwave are both crewed by world class professional sailors. Team Ran has won IRC One twice before but Zennstrom's team has never won the race overall. Shockwave will be competing in the race for the first time, George Sakellaris' team was in fine form earlier in the season, winning the RORC Caribbean 600 overall.

In IRC 2 last year's overall winner, Georgio Benussi's TP52, B2 skippered by Michele Galli, returns to defend the title. However, the Italian flyer will first and foremost be focusing on winning a highly competitive class including; Jens Kellinghusen's German Ker 51, Varuna, which won the gruelling Sevenstar Round Britain and Ireland Race and Stefan Jentzsch's brand new hi-tech Carkeek 47, Black Pearl. There are a bevy of yachts in the class which will revel in heavy weather, Vincenzo Onorato's Italian Cookson 50, Mascalzone Latino, German Swan 82, Grey Goose and British Frers 94, Bristolian.

I thought it was just me.

I have had the same problems.

I find it best to ignore all the silly multi image style links and go to the bottom text menu bar.

Do not know what this must has cost, but the testing was obviously not done in the real world.

The Last Word
Don't part with your illusions. When they are gone you may still exist, but you have ceased to live. -- Mark Twain