Volvo Ocean Race Starts From Alicante This Saturday
The 12th edition of the race starts from Alicante on Saturday October 11th. Seven teams, 66 sailors and 18 nationalities setting off in identical one design Volvo Ocean 65 racing machines.

Large crowds are expected to converge to watch the emotional dockside departure - where sailors must say goodbye to their wives, husbands and children - before the leg starts at 1400CET in front of the Alicante dockside for a lap of the bay before heading off towards the Strait of Gibraltar and out into the Atlantic.

The Fish Weighs In...
The pace is hotting up with increasing rapidity. There are less than 48 hours to the start of this edition of the Volvo Ocean Race - the twelfth since the event began (as the Whitbread Round the World Race in 1973). This, however, is the first in one-design boats and has nine stopovers during its 38,739-mile course that finishes in Gothenburg on June 27th next year.

The seven competing yachts - 65 footers with canting-keels and water-ballast are proving almost as quick as the 70 footers from the last race; possibly faster downwind and fractionally slower upwind in heavy airs; and promise to finish more closely than ever before.

It will not be tough at the start - only four to five knots of breeze are expected on a sunny Saturday and Simon Fisher, the navigator of the Abu Dhabi entry Azzam, has predicted that it will take two days at least to reach Gibraltar, 300 miles away. He says that there is no sign of the Atlantic Trades to take them across the Ocean on the accepted route to Cape Town. -- Bob Fisher in Sail-World.com (first in a three part series) 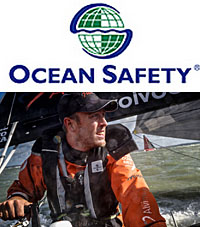 A couple of vital safety products from Ocean Safety will give a massive boost to the chances of survival at sea for the crews starting the Volvo Ocean Race in little over a week from now. They are the Kannad R10 AIS Survivor Recovery System (SRS) and the Kru Sport Pro lifejacket, which will be worn by each crew member on Team Alvimedica, Team Brunel, MAPFRE and Team Vestas Wind. The Kru Sport Pro is designed to have the R10 fitted to it, so there is nothing else to think about when putting on a lifejacket.

The Kru's waistcoat design makes it very comfortable and barely noticeable to wear and what's more the R10's size means it can also be carried in the jacket's pocket. The R10 alerts AIS receivers on vessels within a four mile radius with precision position information, so if a crew member falls overboard, the alert will transmit both onboard the yacht, and also on other vessels in the area.

At Ocean Safety's recent training day for the Volvo teams SCA Skipper Sam Davis spelt out the importance of the equipment. "Safety is critical," she said. "We are self sufficient out there and there is going to be nobody running after us looking out for us. To win a race you have to finish and so safety is a performance aspect."

Racing across the Men's and Women's 470, Laser, Laser Radial and Men's and Women's RS:X will take place across three race courses at the venue of the Beijing 2008 Olympic Sailing Competition. Strong Chinese contingents as well as international excellence will make up the six fleets ensuring an exciting week of racing in China.

Competitors across the six events will be vying for their share of the 180,000USD prize money. 18,000 USD will be awarded to the gold medallist with 8,000 USD and 4,000 USD going to second and third place.

Racing is scheduled to commence on 14 October Medal Races bringing the regatta to a close on 18 October.

As everyone had hoped for, the Fraglia Vela Riva did a magnificent job both hosting the on-shore social festivities as well as providing excellent racing on the famous Lago di Garda.

The fleet was blessed with a perfect first day, with three races completed in southerly winds of 16+ knots. After the first race in 8-12 kts, the wind grew in strength, with puffs climbing into the high teens.

For the second day of sailing, Riva del Garda provided gorgeous weather, sunshine and winds of 12-18 knots from the south.

For the first time all week, Friday dawned with light airs and it stayed that way all day. It was a beautiful "harvest fall day" on the lake, with temperatures in the 70s and 6-8 kts of breeze from the south.

1202 Registrations and New Arrivals
1202 teams have registered to the Barcolana, confirming the positive trend in contrast to recent editions. Today about a hundred more sailboat owners have entered the regatta and about fifty boats have moored in the Bacino San Giusto and in the Bacino San Marco.

On Saturday 11th October, Tina Maze - downhill and giant slalom gold medallist at the Sochi 2014 Winter Olympics - will be Generali's special guest in Trieste for the Barcolana.

In the afternoon the four Extreme 40 catamarans hit the water after assembling their cats in less than eight hours. The Barcolana organizers were thrilled to see the beautiful yachts sail in the Gulf.

* Land Rover brings to Trieste, for the first time in this format in Italy, the Extreme 40 catamarans. They are nimble and quick and race in reduced spaces as if they were in a stadium. The stadium concerned is the Bacino San Giusto that will be the first in Italy to host a series of regattas of Extreme 40 catamarans, an illustrative and preview event, a special format that fascinates millions of people year after year from Australia to England, from Russia to the United Arab Emirates.

From 9th to 11th October sailing enthusiasts will have the chance to support the great champions of the Extreme Sailing Series, watch the catamarans' evolutions, jumps, tacks and gybes on one hull, as well as incredible ways of approaching the buoys, with all of this happening a few steps away from the shore.

Along the Rive a special area will be dedicated to catamarans, where it will be possible to experience first-hand this new and increasingly fascinating aspect of sailing.

Loro Piana Crowned J/80 Italian Champion
Loano, Italy)- There was no question the J/80 Italian Nationals had attracted some of the big names in international sailing circles that recently took place from the 25th to 28th of September in Loano, Italy. While many of them did well, as anticipated, it was Giacomo Loro Piana (of the famous fashion house- Loro Piana) that provided all the drama on the final day, flying to the top of the standings with one race to go and, while holding onto their breath in the last race, just held on for dear life to win a three-way tie for first.

In the end, Loro Piana nearly lost the regatta, posting another 7th while Rama/ Coppa won the final race followed by Edoardo/ Bressani in 2nd and Galli/ de Angelis in 3rd and Alberto Signorini with Tommaso Chieffi in 4th. As a result, Loro Piana won the tie-breaker on most 1sts, Gallie/ de Angelis took 2nd on most 3rds over Edoardo/ Bressani. Settling for 4th was Signorini/ Chieffi and in fifth overall was Rama/ Coppa sitting on 26 pts.

Industry News
The Dinghy Academy, Valencia has successfully undergone a formal audit from ISAF and has subsequently become the first venue to become an ISAF Approved Training Centre.

The equipment for which the training programmes at the Dinghy Academy, Valencia are currently granted is to the Laser and Finn classes.

Luca Devoti, Owner and Head Coach at the Dinghy Academy Valencia said of this approval, "Sailing is and has been all my life. For the Dinghy Academy and for all those working, training and racing here, to be recognized by ISAF is a great honour. We will not only strongly promote the Olympic values in the athletes we train but also try to do our best to introduce as many young sailors as possible, from all over the world, to enjoy our beautiful sport."

ISAF is currently working with a number of other Sail Training venues wishing to be granted this status based on their provision of training programs for sailors and/or coaches.

MUSTO invites sailing fans in Alicante to take on the MUSTO Grinding challenge for a chance to win a Volvo Ocean 65 sailing experience at the final port in Gothenburg With just two days to go before the action begins in Alicante, the doors have opened at the MUSTO Official Race Store in the event village. Fans can visit the store to purchase official Race merchandise and Race replica kits for all MUSTO teams; Abu Dhabi Ocean Racing, Dongfeng Race Team and Team Alvimedica. Visitors can also take on the international MUSTO Grinding Challenge to be in with a chance to win an incredible Volvo Ocean Race prize.

National Maritime Museum Cornwall has won the 2014 Telegraph Family Friendly Museum Award, beating a six-strong shortlist to sail away with the accolade of Britain's most family friendly museum.

The Family Friendly Museum Award is the biggest museum award in Britain and the only one judged by families. The award, run with the charity Kids in Museums, aims to celebrate those museums that enthral children of all ages. Kids in Museums is an independent charity dedicated to making museums open and welcoming to all families, in particular those who haven't visited before.

This year's six shortlisted museums were visited secretly by undercover family judges. The families measured the museum against the Kids in Museums Manifesto - 20 ways to make a museum family friendly - compiled entirely from visitors' comments. After sneaking around and reporting back their findings, they picked National Maritime Museum Cornwall. The Maritime Museum received the award at a star-studded ceremony at the Telegraph newspaper offices on Friday.

And it was double award joy for the Falmouth Museum as they were also named Cornwall's Best Museum in the 2014 Cornwall Today Awards on Thursday evening.

"The sets of foul weather clothing provided last year were truly tested and performed well. The weekly draw amongst competitors present at the prize giving was extremely popular and will be back from Sunday 5th October, when Hudson Wight will also be providing clothing and voucher prizes as the day sponsor," said Trevor Pountain, Commodore Hamble River Sailing Club.

During the Winter Series, Hudson Wight will be offering a 'Team Bundle' comprising three sets of 2014 HW1s for £999 (usually £400 per set or £360 using the special Affiliate code below) or three sets of 2013 HW1s for £799 (only available in a limited range of colours and sizes M or L, Red and L, Blue). To qualify for this discounted price, please add 'HRSC' in the affiliate box on Hudson Wight's website http://www.hudsonwight.com - the company is also providing a range of Daily Draw and Winners' prizes, plus overall Class prizes.

Former finance manager Jey Kanthan told IBI's sister publication Yachting Monthly: "There are not enough funds to pay the remaining four employees, the company is insolvent and the directors are drawing up a long list of creditors."

Kanthan said part of the problem was outside contractors - including engineers - being allowed on site to work on yachts. "They did not have our overheads and therefore were able to undercut us."

He also said business was impacted when other brokerage companies started to operate from the Premier Marina in West Sussex.

CAMPAGNE DE FRANCE is probably the best ever built Class 40. Designed by Finot/Conq and built by Structures & Mora under the supervision of Halvard Mabire & Miranda Merron, in 2011. She has only been prepared and raced by them ever since, one of the most famous Franco/British short handed teams and renowned racing project managers. She is the quintessence of Class 40 boats, winner of the Transat Quebec Saint Malo. Available at the finish of next Route du Rhum. One of the only "OSR Cat0" Class40 on the market.