Hundreds of thousands of sailing enthusiasts, local residents, friends and family have passed through the championship venue and the closing ceremony was no different with a packed crowd watching the conclusion of the event.

At the closing ceremony the French team received the IOC President's Trophy which is presented to the best overall performing nation. Julien Bontemps (FRA) and Charline Picon (FRA) started the medal rush as they picked up men's and women's RS:X honours with Thomas Goyard taking men's bronze. Billy Besson and Marie Riou (FRA) gave the nation a further gold to celebrate, picking up Nacra 17 gold with a day to spare.

With 138 Rio 2016 Olympic Sailing Competition places up for grabs across the ten Olympic events, thirty nine nations have secured at least one spot on the Rio start line.

Canfield started strong in the 15-20+ knot northerly breeze that puffed and shifted all day, dominating all matches in the first-to-three point Semi Final against Bjorn Hansen (SWE) Hansen Sailing Team and amassing a convincing winning score of 3-0.

In the last match, Canfield wanted and took the right and successfully defended this side to where Williams never had a chance to get ahead. Even in one dial-down defence on the first beat, Canfield simply extended his lead more. With the breeze dropping slightly, and the big puffs of earlier matches no longer available to enable the trailing boat any opportunity to catch the leaders, Canfield went on to sail comfortably to the finish and his successful defence of the Chicago Match Cup, 3-1 over Williams.

Perfect Conditions For The Last Day Of The EFG Motheurocup
With plenty of sun today, the "Ora engine" was revving up nicely across the whole lake. Under the watchful eye of the Acquafresca PRO, Luca Vangelista, four races were fired off, the last one being a three-lap race. By this time most sailors were definitely feeling their hiking muscles and had to find the extra energy in order to push through the last race. Some great battles were developing for the top spots as the sailors were swapping finishes in every race. Only Chris Rast put his stamp on this last Act by winning every single race, but not without having to fight it out with Carlo de Paoli, who showed great pace, starts and boat handling.

Rast was followed by De Paoli and Galeotti who after an OCS in the last race had to wait and see if Matthias Renker would finish well enough to claim the remaining spot on the podium. With a third in the last race for Renker he fell one point short of Galeotti and will have to seek revenge at the upcoming Swiss Nationals in Geneva at the End of October.

With a solid five Act wins it is also Chris Rast that walks away with the Euro 3000 prize money for winning the overall EFG MothEuroCup ranking for 2014.

Seahorse September 2014
What's in the Latest Edition Of Seahorse Magazine 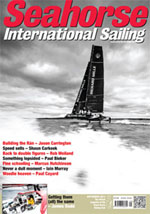 Remarkably close
Just 29kg covered the spread of measured dry weights for the first seven new VO65s out of the yard... Class measurement manager James Dadd explains just how it was done

Quantum Racing secured the 2014 Barclays 52 SUPER SERIES title today on Race 7 of the ZENITH Royal Cup Marina Ibiza regatta and on the next race they did enough to also win the Ibiza event, their third regatta title of the season.

The American flagged team of Doug DeVos came to Ibiza with a healthy points lead in the four event circuit which attracted 12 TP52s from ten different nations. They remained steadily consistent to close out their second 52 SUPER SERIES championship win in a row with a margin of 15 points over Azzurra and 19 points over Ran Racing.

Quantum Racing, skippered by America's Cup winner Ed Baird with Terry Hutchinson as tactician also won the US 52 SUPER SERIES in the early Spring and were crowned TP52 World Champions in Sardinia in June.

I am pretty sure I will not be on the winning boat this weekend but, for once, that is a long way down my list of priorities. The quest to bring the America's Cup back to Great Britain can wait for a few days.

Sunday's inaugural Bart's Bash is an event I have been looking forward for a long time. A Guinness World Record attempt for the Largest Sailing Race ever (actually hundreds of races all held within a 24hr window), in memory of my great friend and one of this country's greatest Olympic sailors, Andrew Simpson, who tragically lost his life in an America's Cup training accident last year.

The idea is to raise funds for the Andrew Simpson Sailing Foundation, a charity set up to encourage and inspire young children to get involved in sailing, something that Bart, one of the kindest and most generous of souls, was particularly passionate about.

The response has been unbelievable, almost overwhelming; a true testament to Bart's popularity within the sailing community. Already over 11,000 sailors from 700 sailing clubs across 65 countries have signed up, which means that from New Zealand to Newquay, from Hawaii to Heathrow - which is where I'll be racing on the Queen Mary Reservoir - there will be hundreds of races taking place in memory of Bart. -- Sir Ben Ainslie

Lorient Horta Solo Leg 2
At 1500hrs on Friday, Gwenole Gahinet, on the Figaro Safran-Guy Cotten, left Horta on the return leg of Lorient Horta Solo. Just before the start, the 18 competitors headed north, their destination: Lorient, where a finish around September 27 is expected. The task: 1,250 miles of solo offshore racing.

After a four-day stopover in Horta, Gahinet left behind the wild and magnificent volcanic island of Faial, keen to return. It was the first time the skipper had been to this archipelago that is very popular with professional and amateur sailors making Atlantic crossings.

The 1,250 miles of racing across the Atlantic could be difficult for the 18 soloists. "The first challenge is to negotiate the light winds at the start," Gahinet explained. "We'll have to take a route to the north or northwest in order to catch the breeze that will gradually turn to east before settling again to a northerly. At its peak, we should have 25 knots of wind, which is pretty considerable upwind on a Figaro Beneteau." Strategically, it looks like being an exciting leg, because managing all these small transitions requires a lot of thought and careful analysis of weather charts and the sea-state.

The fleet is expected around September 27 in Lorient harbour, where the winner of this first edition of the Lorient Horta Solo will be crowned along with the champion of the France Elite de Course au Large en solitaire (France's elite offshore solo sailing championship).

Founded in 1994, we've been at this for 20 years and have a client list unmatched in the marine industry. Events we've covered include the 1996 Olympic sailing events for ISAF (IBM crashed and burned, we delivered), the Bermuda Gold Cup, countless world and national championships.

We build sites that our clients can easily manage themselves with a content management system... and have full mobile capability. The same website and content works on any device: laptop, desktop, tablet or phone. Blogs, photo albums, videos, weather and wind... whatever your company, club, class or event requires.

Tom Carruthers Wins Etchells North Americans
With the top 5 within a point of each other entering the third and final day at the International Etchells Class North American Championship, Tom Carruthers and his team of Andrew Palfrey and Chris Busch posted a 4-1 to win the day and seal the victory. In second was Steve Benjamin with Peter Duncan in third.

Not Sailing But Very Cool
It's not true mental telepathy -- not yet, anyway -- but an international group of researchers is reporting they've successfully transmitted information in a brain-to-brain link between two humans.

Scientists from the U.S., France and Spain say they leveraged several technologies, including computers and the Internet, to send information between test subjects in India and France, separated by 5,000 miles, without carrying out any invasive procedures on the subjects.

By utilizing an electroencephalogram connected to the Internet and transcranial magnetic stimulation, in which electromagnetic induction is used to externally stimulate a brain, it proved possible to communicate information from one human brain to another, the researchers report.

Simon Cash-Reed
It is with great sadness that we announce the death of Simon Cash-Reed, founder and Chief Executive of Seago Yachting. Simon passed away peacefully in his sleep on Saturday 6th September, following a long battle with illness.

Seago was founded by Simon Cash-Reed and Andrew Mills in 2003. Seago is a marine distribution business based in East Sussex. Simon started his career in the marine industry in 1977 with his own business XM Yachting

Simon's son in law Daniel Temple will take over the daily management of Seago, supported by other family members and the Seago team. Dan has worked at Seago for the last year.

S/Y MASAI is a Pogo Class 40 yacht designed by Finot and built by Structures in 2011. She is well-proven & reliable boat and is in fact one of the fastest class 40 yachts in the world. She has been maintained and prepared by professionals.

The Last Word
Science has made us gods even before we are worthy of being men. -- Jean Rostand