29er Worlds - Finals Start Thursday
Kingston, Ontario, Canada: Another windy day on the Kingston waters to wrap up the third and last day of the qualification series. After a stormy start to the day, the rain cleared and the breeze filled in from the South-South West with a steady 10-12 knots.

All the sailors were excited to get racing today, with both fleets starting the day with general recalls. The black flag was raised on both courses and pushed sailors behind the line allowing both fleets to start qualifying race 9.

Provisional results have Brice Yrieix and Loic Ficher-Gillou (FRA) in first followed by Kurt Hansen and Harry Morton (AUS) and 3rd Micah Wilkinson and Jack Rogers (NZL). For the finals, the Gold Fleet are the top 25 with the remaining equally divided into Silver and Bronze Fleets.

The finals begin tomorrow and run for the following 3 days. The award ceremonies will be on Saturday August 2nd at Portsmouth Olympic Harbour. -- Jerelyn Biehl

Results can be found at www.29erworlds.org/index.php/results/

For more on the Inductees, please visit: halloffamers.nshof.org 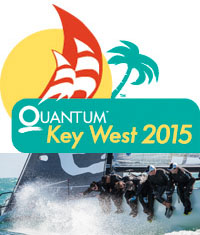 Midwinter Championships, new designs, renewed rivalries, IRC, PHRF, HPR and One-Design classes - Quantum Key West 2015 will have all that and more! Sailors from around the world will be in Key West for North America's premier winter event, to compete in boats ranging in size from 72' mini-maxis to the 23' J/70s.

Event dates are January 18 - 23. It's time to start planning your ideal southernmost vacation.

Warm and sunny Key West is the perfect venue for world-class competition, exceptional racing conditions and unique shoreside fun; it's a regatta not to miss!

Organised by the Royal Ocean Racing Club, the Sevenstar Round Britain and Ireland Race is undoubtedly one of the toughest yacht races in the world. While other ocean races are longer, racing 1,800 miles around a coastline notorious for highly changeable weather and wicked tides and currents, puts the race amongst the most difficult to complete, let alone win

MOD70 Musandam-Oman Sail is hot favourite to be the first yacht to complete the course. Co-skippers Sidney Gavignet (FRA) and Damian Foxall (IRL) have put together a MOD70 crew selected from Oman Sail's elite squad of sailors, plus well-known South African Volvo and America's Cup sailor Jan Dekker - half of the crew will be Omani for the first time ever.

After racing round the Isle of Wight in the Artemis Challenge during Aberdeen Asset Management Cowes Week, the Sevenstar Round Britain and Ireland Race will be the first outing for the brand new fleet of Volvo Ocean 65s that have been built especially for the Volvo Ocean Race which starts in October 2014. It is the first skirmish between five professional teams: Team Campos, Abu Dhabi Ocean Racing, Alvimedica, Dongfeng Race Team and Team SCA.

The overall winner of the 2010 Sevenstar Round Britain and Ireland Race returns, now known as Artemis - Team Endeavour. The IMOCA 60 will be skippered by Mikey Ferguson, who was on the boat four years ago, and the crew includes Jules Verne winner, solo round the world sailor and multiple world record holder, Brian Thompson. Artemis Team Endeavour has taken part in many RORC races this season with crew including injured members of the armed forces. Team Endeavour is jointly funded by the Team Army Sports Foundation and the Endeavour Fund, an initiative created by The Royal Foundation of The Duke and Duchess of Cambridge and Prince Harry.

Five fully crewed Class40s will be competing this year. Ned Collier Wakefield's Team Concise is back with a new Ker designed Class40 in an attempt to break the class race record he set in the 2010 race of 9 days, 13 hours, 32 minutes and 20 seconds:

ISAF World Rankings
The ISAF World Sailing Rankings for 28 July 2014 have been released.

A list of included events in the Rankings here:
www.sailing.org/rankings/fleet/events_included.php

Bermuda Will Host America's Cup World Series Event
Bermuda will play some part in the America's Cup, even if the Island is not chosen as the venue for the final.

The Island will host an America's Cup World Series Event at the very least, Grant Gibbons, who leads the bid team, said last night in a Government statement, following a series of meetings in New York with race organisers.

Changes to the Island's infrastructure were also discussed, with Hamilton Waterfront, Morgan's Point, and Dockyard identified as areas for potential development.

"I was very pleased with the meetings and the strong working relationship established with the America's Cup Event Authority (ACEA) and I'm looking forward to further discussions over the next few weeks as more details are resolved," Dr Gibbons, the Minister of Education and Economic Development, said.

"It has now been confirmed that the Island is set to host an America's Cup World Series racing event regardless of the outcome of the final venue selection.

"The meeting reviewed a number of organisational and logistical issues that Bermuda will need to address in order to be able to accommodate not only the racing teams, but also technical support, sponsors, media and the large influx of visitors wishing to view the event on Island over the 2015 to 2017 period.

"Infrastructure requirements and site preparation for the Hamilton Waterfront, Morgan's Point and Dockyard were also considered during the meeting."

Talk Farr 280 One Design : Talk Bang For Your Buck

To find out more about this exciting race boat, book your place at the Farr 280 Presentation meeting to be held during Aberdeen Asset Management Cowes Week*.

The Farr 280 One Design is a new production racing sailboat by Farr Yacht Design that delivers exciting grand prix racing in a boat that is under 30' long. As a modern one design, the Farr 280 delivers dynamic grand prix features and style in an affordable, smaller boat package. The boat displays ultra high performance on all points of sail, with a focus on inshore racing for moderate crew sizes of between five and six people.

With substantial UK and European interest in this high performance class, the time has come for potential owners to meet the designers and builders, to discuss the boat, race circuit and the future. If you want to sail fast, in large one design fleets and participate in events throughout the UK and Europe, then the Farr 280 is for you.

To book your space email

*date to be advised

Kempe Thrilled To Invite Himself To Gold Cup Party
Somers Kempe, the Royal Bermuda Yacht Club commodore, found himself in the awkward position of sending an invite to himself to compete in the Argo Group Gold Cup in October. Along with crew Adam Barboza, Will Thompson and Paul Wring, Kempe clinched the 2014 National Match Racing title in the classic International One Design sloop in Hamilton Harbour at the weekend to secure the sole spot up for grabs in the Alpari World Match Racing Tour-sanctioned event.

Kempe did so convincingly, by winning all of his round-robin matches before beating Patrick Cooper 2-0 in the best-of-three final in favourable conditions. -- Colin Thompson, The Royal Gazette

The Sailing & Boating Wonders Of Ireland's West Cork Coast
The sailing paradise of West Cork on Ireland's south-west coast is at its best right now, and the south coast fleets are already heading that way for the traditional West Cork regattas in August. W M Nixon reflects on this magic region, and tells us how Don Street of Glandore was encouraged to take up writing about the sea and sailing by a Nobel Laureate in Literature.

West Cork is as much of a frame of mind as a specific place. Officially, we might suppose it to extend all the way along the Rebel County's coast from the Old Head of Kinsale to Dursey Island away in the far nor'west, up at the north side of the wide entrance to Bantry Bay. But this doesn't necessarily mean that all the folk in the hinterland north of this coastline see themselves as being in West Cork.

As for boat people, our limits are much more narrowly defined. If you're afloat down there, West Cork is that sublime but compact bit of coastline between Galley Head and Mizen Head, just 38 miles as the gannet flies. It's the ultimate lotus land, with an interesting scattering of islands, blessed moreover with an abundance of sheltered natural harbours each with its own port town or village vying with its neighbours in colourful character. And visible from much of it is the Fastnet Rock, mysteriously a place of the remotest ocean despite being only a matter of four miles from the nearest land at Cape Clear.

A key update is that for a race to count towards the record it must have 25 boats taking part, rather than 25 sailors as previously communicated.

The newly finalised criteria include:
- There must be at least 25 participants, i.e. 25 boats taking part at each location. If a club has less than 25 participating boats, it will not be able to participate in the Guinness attempt, however organisers still welcome the club's participation in the Bart's Bash race and the club will still be able to submit the results for entry into the worldwide leaderboard.
- The race start time and finish time must take place between 00.00 on the 21 September GMT and 23.59 on the 21 September GMT.
- The distance of the course will need to be measured accurately using GPS. The course must be at least 1km long. This can be multiple laps of a shorter course.
- The race must be at least 15 minutes long.
- The race will need to have a single start and finish point (start line one side of the committee boat and finish line the other side is acceptable).
- All clubs wishing to enter the Guinness world record attempt must have 2 independent witnesses.

Clubs need 1 steward per 50 entrants; these can be safety boat drivers and crew.

Registration for clubs closes on 14 September 2014. Individual online entries will close on 19 September. Anyone wishing to sign up after this date will be able to do so at the clubs directly.

With just under two months to go, this monster-size attempt has over 1,500 sailors from more than 550 clubs and 50 countries around the world signed up and fundraising to support the Foundation's charitable activities.

'Bart's Bash' will see racing held at hundreds of locations across the world simultaneously on 21 September 2014 at 11am (BST) in memory of double Olympic medallist and America's Cup sailor Andrew 'Bart' Simpson.

* From Eddie Mays: re The Last Word

Actually the last word (in the Oxford English Dictionary) is: 'Zyxt', an obsolete Kentish word that is the second singular indicative present form of the verb see.

Competitive against the 72's in the Mini Maxi fleet, and also and much more importantly in IRC racing in general.

Beautifully built, and to sail, she offers an excellent opportunity to nip at the heels of the Mini Maxi 72's and to leave TP52 fleet behind.

The Last Word
Go to Heaven for the climate, Hell for the company. -- Mark Twain