Quokka Wins Volvo Cork Week
Cork, Ireland: Marvin Gaye's 'Let's get it on' and The Stranglers 'Something better change' rang out over the air waves as the Volvo Cork Week fleet waited for the breeze to set in for the final day of racing. However, the wind was sufficient to allow for a full racing programme to decide the winners for the regatta. Performing well in light winds requires concentration, perfect boat handling skills and tactical acumen. The teams that mastered these factors reaped the rewards. Volvo Cork Week featured the entire Irish team for this month's Brewin Dolphin Commodores' Cup and all three yachts had magnificent results.

Michael Boyd's Grand Soleil, Quokka (Royal Irish YC) was the clear winner of IRC Two, winning seven of the eight races sailed and was awarded The Kinsale Kettle for Yacht of the Week and the Hugh Coveney Trophy as the overall winner of the Cork Harbour Race. Quokka along with Catapult and Antix will be representing Ireland in this month's Brewin Dolphin Commodores' Cup.

Only a broken spinnaker pole in Race 4 prevented Quokka from a perfect scoreline at Volvo Cork Week.

In IRC Three, Pat Kelly's J/109, Storm (Rush YC) had a shaky start to racing on the final day, placing 12th but 2nd place in the last race secured the all Irish team the class win.

In IRC Four the winner was Tim Cunliffe's Half Tonner, Insatiable (Royal Cornish YC). The vintage half tonner was beautifully restored at Pendennis Shipyard in Cornwall. The Cornish team scored podium finishes in every race to win the class by ten points.

In IRC One White Sail, George Pettifor's Beneteau 36.7, Foxtrot has had an outstanding regatta, winning four out of six races to win the class.

Larsen and Van West, 2014 F18 Champions of the World
Ballyholme Bay, Bangor, Northern Ireland: The podium may have looked settled even if the positions had not been agreed with 3 races to go. Belfast Lough offered a minefield today for the competitors to make their way through in light variable wind, and unfortunately the young Americans were the first to falter.

Ashby/Goodall went on to secure the first of three bullets for the final day. Who know's what their overall position might have been without the hull damage on Day 3. Bontemps/ Amiot closed the gap on Larsen/ van West but Reiss/ Whitehead were now looking at third place.

Race 2 (14) saw Bontemps/ Amiot again get in front of Larsen/ van West until the last downward leg but Gunnar somehow got in front before the finish.

In the final race (15), a shift at the start and light winds on the left hand course stranded half of the fleet.

After 14 years of competing in F18s, Gunnar Larsen was finally World Champion with Ferdinand van West.

Dragon Edinburgh Cup
Lymington, UK, Reporter Rupert Holmes. The final day of the Edinburgh Cup, supported by Aberdeen Asset Management, served up another tantalisingly close race in challenging conditions. The day started with an hour's postponement while a sea breeze became established - a decision that delivered another stunning day, making best use of the afternoon's limited amount of decent wind.

With Graham and Julia Bailey not sailing today, having won both the Edinburgh Cup and the Corinthian title, and Laurie Smith having craned out, two helms dominated the front of the fleet - Ted Sawyer and Tom Vernon. They were never more than a few seconds apart until the end of the final beat.

After a successful 2014 event, the class is enthusiastically looking forward to next year's Edinburgh Cup in Largs, Scotland. -- Fiona Brown

SALES NEGOTIATOR
A leading UK builder of quality cruising yachts has an opportunity for a sales negotiator at their East Coast facility. The successful candidate should be a knowledgeable, experienced yachtsman with a proven track record in sales, ideally within the marine industry. Additional language skills would be an advantage.

Applications in confidence by email to

It was a day for ices, swimming and sunbathing but no racing. Everyone, well almost everyone, was willing it to happen, but it just wasn't to be. The sailors launched for a start at 11.05, and that got away on time in 5-6 knots. At the first mark Lars Johan Brodtkorb (NOR) led from Riccardo Bevilacqua (ITA) and Jeremi Zimny (POL). Zimny had taken the lead by the gate but the wind had almost gone by then and before the fleet had finished rounding the gate, the race had been abandoned.

Finally at 14.00, with no wind developing, the race officer took the decision to end the waiting and abandoned all racing for the day. A cheer immediately went up from Pedersen who had achieved his goal of winning his first major Finn event.

Saint Quay Portrieux, France: The 2014 Half Ton Classics Cup came to a conclusion Friday with one final thrilling race off the beautiful North Brittany coast and a delightful prize giving on the waterfront of Saint-Quay-Portreiux.

With the breeze a little lighter at around 10-14 knots we saw some different faces at the front of the pack today and the finish was incredibly close, both on the water and on corrected time. Robert Tregear's Per Elisa (1989 Ceccarelli), the last one-off half tonner ever built, came into her own and gave Swuzzlebubble a run for her money, although they couldn't quite save their time and Swuzzlebubble won by 23 seconds. Third place went to Frederic Waniart's diminutive Maeva (1974 Mauric) who beat General Tapioca for third by a mere 0.16 seconds! Also much happier in today's lighter airs was Checkmate XV who took fifth, beating The Big Picture by 0.53 seconds!

Our winner, Peter Morton's Swuzzlebubble (1978 Farr), had already been confirmed Thursday, but still came out to race purely for the joy of it. And our remaining podium positions were confirmed as Bernard Fournier Le Ray's Brittany Drizzle (1978 Berret) evaded one final challenge from her sister ship General Tapioca, owned by Philippe Pilate, to claim second place with General Tapioca taking the third step on the podium.

And so we say farewell to Saint-Quay-Portriuex and look forward to seeing the Half Ton Classics family once again in Nieuwpoort from 17-23 August 2015. -- Fiona Brown

Classics Finish In Swift Style
Newport, Rhode Island, USA: After sailing in fresh breezes Saturday, 26 pristine classic yachts, divided into four classes, were faced with challenging 20-25 knot winds on Sunday that determined their overall positions in Part I of New York Yacht Club Race Week at Newport presented by Rolex. The biennial event, in its ninth edition, is known for its split format whereby IRC, PHRF and One-Design Racing sailors will get their shot at the action during Part II, scheduled for this Wednesday through Saturday (July 16-19).

Due to today's brisk conditions, the Race Committee was able to make a seat-of-the-pants decision to send the Classics Class 1 (Non-Spinnaker) on an 18-mile course around Prudence Island. (The class had yesterday sailed two Navigator Courses, using government marks, while the others raced around-the-buoys.) Jed Pearsall's (Newport, R.I.) 50-foot P Class Sloop Chips took first place in the race and claimed overall victory in the class, as well. 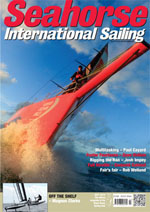 Farr 40 Us West Coast Championship
Santa Barbara, California, USA: A strong fleet of 15 boats is entered in the Farr 40 West Coast Championship, being held July 16-19. An influx of Australian entries will add spice to the fourth stop on the International Circuit, which culminates with the Rolex Big Boat Series off San Francisco in early September.

Coming from all the way Down Under to prepare for 2014 Rolex Farr 40 World Championship are Estate Master, Kokomo and Voodoo Chile. A fourth Aussie entry, Transfusion, will join the fray for worlds, being held Oct. 15-18 out of St. Francis Yacht Club in San Francisco.

The Hills, who most recently captured the Tasmania State title and finished third at Australian Nationals, are returning to the Farr 40 International Circuit for the first time since 2011.

Tour Voile: Oman Sail Is Back In The Top 3
Courrier Dunkerque 3 and Groupama 34 are still in the lead but they now have to keep on eye behind their back as Team Oman Sail is attacking !

While the boats were racing on the water, the Race Village set in the new marina in Roscoff saw the crowds of visitors. The weather conditions were perfect with 10-15 knots of north-westerly wind and sunshine, but the race course was still challenging, with a strong tide to deal with, and the seaweeds and lobster traps to watch for.

The two leaders Courrier Dunkerque 3 and Groupama 34 took the best starts and were faster than the other boats. But two teams are going up the learning curve and are starting to threaten the race favourites. Both had excellent results today, with a 3rd and a 2nd for the Omani team, and a 2nd and a 4th for the Swiss team.

For Bretagne - Credit Mutuel Elite, it was a tough day, with two 6th place. Nicolas Troussel and his team made some tactical mistakes and are dropping in 4th place overall.

Tomorrow the fleet will leave the pontoons at 10.30am for one inshore race. And at 1.30pm they will take the start of a coastal race

* From David Munge: Sorry to drag peoples mind back to a dialogue on "fun in sailing" but, it would be fair to say that Britain has dominated global Finn sailing for well over a decade, Messrs Ainslie, Percy, Simpson, Scott, Wright, Mills, and Andrews have been truly sensational. Ainslie, Percy and Scott and possibly the others have moved on into the America's Cup, and have provided positive role models for any young sailor showing what they can achieve. Simpson, is sadly no longer with us.

In the Silver Finn Regatta taking place in Hoorn in Holland this week, there is just one GBR competitor. So where is the endless tail of development under the RYA? A rumour has it that David Howlett who has been responsible for much of the above sailors success is being courted by other countries who can see the sense in emulating Britain's Finn sailing prowess.

Is this because of a lack of fun in GBR's sailing environment?

The Mark Mills designed DK46 IRC racing yacht "Exile" represents the opportunity to purchase a beautifully cared for, well maintained and highly successful 46 footer with over $200,000 spent on a new carbon rig 12 months ago & an almost new inventory of North 3Di Race Sails plus Spinnakers. This particular example has a very enviable race record over the last 6 months with a 1st overall in the 2014 Sydney Harbour regatta against the likes of the Farr TP52 'Quest', Ker 46 'Patrice' & Carkeek 60 'Ichi Ban'. Also 1st overall IRC 2014 Coffs Harbour Series, 2nd Overall IRC Nationals 2014, 2nd overall IRC Coffs Harbour Race with a 3rd Overall IRC in the 2014 Lord Howe Island race. Fully race ready for the coming season to continue her winning ways. Don`t risk buying something unproven, this is your winning yacht!

The Last Word
Life is a tragedy when seen in close-up, but a comedy in long-shot. -- Charlie Chaplin