Williams Hangs On
Adam Minoprio has skippered in the Congressional Cup and other major match racing competitions, but has a new role in the game these days: tactician for 2010 Crimson Blazer winner Francesco Bruni, in Italy's renewed Luna Rossa campaign for the America's Cup, starting with Stage Two of this event.

The New Zealand native speaks little Italian, but that isn't a problem.

"Everybody on the boat speaks English," Minoprio said, "but the big thing this week is to make sure my English is clear and not too Kiwi."

It's a joke, but it must be working. Bruni's boat was among half the fleet of 10 that completed the last four flights of the first of two round-robins Thursday by winning three of four matches. Ian Williams of the UK is still alone on top at 7-2, with Italy's Bruni, France's Mathieu Richard and Taylor Canfield of the U.S. Virgin Islands hard on his tail---literally---at 6-3, followed by Sweden's Johnie Berntsson making a comeback at 4-5. All were 3-1 on the day.

Competition continues with the second round-robin Friday and Saturday, followed by the semifinals Sunday.

Williams' lead would be a bit larger if Canfield, ranked No. 1 in the world, hadn't done to him precisely what Bruni did 24 hours earlier: stalking his stern and, using his right-of-way position, to force him behind the committee boat right up to the starting horn, requiring Williams (No. 2) to do a downwind turnaround as Canfield sailed away into the end of the lazy, hazy day.

Nine more flights remain on the Long Beach outer harbor over the next two days to determine the four semifinalists who will mix it up Sunday. -- Rich Roberts

Standings after 9 of 18 flights

Two Kiwis Escape Action In AC45 Rules Ruckus
The two New Zealanders involved in the ruckus over boat tampering in the AC45 class prior to the 34th America's Cup have not had any further action taken against them by Yachting New Zealand.

The two New Zealanders named by the International Jury for the America's Cup were Andrew Walker and Matt Mitchell. They were subject to an investigation under the auspices of their national body Yachting New Zealand.

The two Commissioners appointed by Yachting New Zealand are quite critical of the way the Hearings in USA were conducted, citing the asking of leading questions and similar; the procedural decisions made by the America's Cup Jury.

They also question why others identified in the International Jury evidence presented were not also named in their Decision and penalised, specific reference is made to Simon Tienpoint, who the Commissioners say: 'We are troubled by the fact that the ACIJ failed to include an allegation of gross misconduct against Simon Tienpoint.' Adding: 'We struggle to understand how a senior sailing member of OTUSA who admitted in an interview with ACIJ Jury members filling a kingpost on Boat BAR with resim should not have faced an allegation of serious misconduct under Rule 69 as Bryce Ruthenberg, Andrew Walker, Kyle Langford and Matthew Mitchell did.'

The Commissioners also says it has 'concerns about OTUSA members who had a part to play in the management and control of boat construction and assembly and were in a position of authority including giving directions to shore crew members....'

Link to the full report and more on Sail-World.com:
www.sail-world.com/USA/

"Best-Ever" wearer comfort and performance are the driving forces behind the conception of the New Elite. By significantly reducing weight without compromising the durability of waterproofness the wearer enjoys a host of tangible benefits. Movement is less restricted (a benefit further enhanced by Slide-Glide Technology) and so by definition the wearer becomes less fatigued and mobility across the deck is improved.

The Lightest, Most Breathable Offshore Gear Ever, Without Compromise:
www.henrilloyd.com/elite/ or Elite product pages 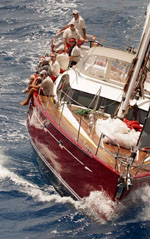 The second race day at the Oyster Regatta Antigua, sponsored by Lewmar was blessed with sunshine and breeze. The Oyster fleet enjoyed superb racing conditions along Cades Reef on the south coast of Antigua. The downwind start had pulses racing and spinnakers flying and a windward leeward course provided plenty of close quarters action for the Oyster fleet, although gentlemanly conduct prevailed.

In Class One, British Oyster 100, Penelope continued its winning streak by taking line honours and the win on corrected time for the second day in succession.

Wolfram Birkel, owner of German Oyster 625 Red Cat, was a very happy man having won his first race in his new boat. Red Cat was the victor in Class Two, Maxim Kudryashov's Russian Oyster 625, Guardian Angel was second and a great performance by Chris Glossop's British Oyster 575, Dreamer of Hamble was third.

Class Three provided an epic duel between two British Oysters, Tony Keal's Oyster 54, Wolfhound and Harvey and Sue Death's Oyster 56,Sarabi. The two yachts were evenly matched for speed around the course and after over three hours of racing Wolfhound crossed the line just a boat length ahead of Sarabi to take the gun and the win after time correction.

Great Britain Claims Line Honours
It's been one of the toughest legs of the 2013-14 edition of the Clipper Round the World Yacht Race, but crossing the finish line, even in the dark, under San Francisco's iconic Golden Gate Bridge, is a moment to savour after 5600 miles of ocean racing across the mighty Pacific

GREAT Britain crossed the finish line of Race 10 in the 16 stage global series at 21:42:56 local time (UTC-7) on April 9 to take line honours ahead of rival Henri Lloyd who slipped back into second place around 1.30pm local time today,

Henri Lloyd crossed the line two hours later at 23:45 local time. A battle had ensued for the last five days between Henri Lloyd and GREAT Britain with the teams both alternating between first, second and third place on the leader board.

All results are provisional and the final positions will be confirmed by the race office after redress is applied.

Sailing Centre In Tribute To Andrew 'Bart' Simpson To Open On Olympic Waters
A new sailing centre in tribute to Olympic star Andrew Simpson is set to open on the Olympic waters.

Based in Andrew's home county and at the London 2012 Olympic sailing venue, the new RYA accredited centre will act as a hub for all the foundation's activities.

It will deliver a range of sailing courses for young people, community organisations and adults - including programmes for schools, as well as club sailors.

Working closely with the Chesil Trust and the Weymouth and Portland National Sailing Academy, the centre will also deliver the highly popular and successful 'Rod Shipley Sail for a Fiver' scheme.

Now in its 10th year, the scheme has enabled more than 12,000 Dorset children between the ages of 10 and 11 to experience sailing on the Olympic waters and is currently introducing 1,500 children a year to the sport.

Despite the huge success of the first generation Kru, there was still room for improvement and the new range of four models is now available featuring a number of improvements and refinements.

The Kru range has previously been worn by many people from the Volvo Ocean Race crews to the RSPCA and the individual yachtsmen.

The design of the new range has been catalysed by the recent closure of Remploy's lifejacket manufacturing facility, who previously built Ocean Safety's jackets. "This closure has provided us with a great opportunity to review the Kru design, a result of listening to feedback from users and benefitting from the emergence of new technology and fabrics," commented Ocean Safety's Mark Hart.

The lifejacket range is now on sale, earning a well-deserved place in the evolution of life saving equipment and for which Ocean Safety will provide a continued servicing network.

The Notice of Race can be viewed and downloaded from the RORC Transatlantic Race website: rorctransatlantic.rorc.org or by contacting the RORC Race Office.

Regularly attracting in excess of 200 yachts for the week of competition, the Giraglia Rolex Cup is a kaleidoscope of nationalities, great racing and convivial social occasions. The decision to finish the race in Monte-Carlo has been made in keeping with the spirit of this great Mediterranean occasion. It is the Yacht Club Italiano's contribution towards the inauguration of the stunning new clubhouse of its twin club, the Yacht Club de Monaco, which has been designed by the world-renowned architect Lord Foster and will open its doors for the first time during the final days of the Giraglia Rolex Cup.

The 62nd edition of this classic adventure will take place from 13 to 21 June 2014. Following a prologue race from Sanremo (13 June) the fleet will gather in Saint-Tropez for three days of inshore competition (15 - 17 June) before embarking on a 248-nautical mile offshore race (starting 18 June) to Monte-Carlo, via the Giraglia, the rocky outcrop off the northern tip of Corsica.

Giacomo will be racing under the burgee of the Royal Akarana Yacht Club.

The other star of the race, Team Vodofone, will not be racing this year following a dismasting on Auckland harbour in February. It opens the door for line honours for Giacomo, and with a bit of weather luck, a very fast time.

Giacomo's first race under the new ownership was the 2013 Sidney to Hobart Classic where she finished 6th on line behind the Maxis Wild Oats X1, Perpetual, Loyal, and Ragamuffin. Giacomo tacked her way up the Derwent River in darkness to the finish line in a dogfight for fourth with Beau Geste, Karl Kwok's new 80 footer and the other Volvo, Black Jack, formerly Telefonica.

For a Notice of Race or other information, all interested parties are invited to go to the Tauranga Yacht and Power Boat (TYPBC) website, www.yacht.org.nz or call the club secretary, Christine Headey at the club on 07 578 5512 or Race Chairman Roger Rushton on 0274 714 715.

Not Sailing But Very Cool...
After flying a plane across the United States last summer using nothing but the sun for power, Swiss pilots Andre Borschberg and Bertrand Piccard have their eye on the whole enchilada. On Wednesday, April 9 they unveiled a solar-powered aircraft they believe will help them circumnavigate the globe in 2015.

The first Solar Impulse plane was really a prototype built to prove that it was possible to fly day and-horrors-night, on solar power alone. On Wednesday, Borschberg and Piccard unveiled the Solar Impulse 2, a redesign of their original plane they hope will carry them all the way around the world in 2015.

Though the new model is bigger and heavier than the first Solar Impulse plane, it's still a lightweight compared to conventional aircraft.

The Solar Impulse 2's 236-foot wingspan is wider than that of a Boeing 777. But while the Boeing plane can weigh as much as 370,000 pounds empty, the Solar Impulse 2 maintains a relatively trim physique, weighing in at 5,300 pounds. -- Roxanne Palmer