Gavignet and his professional team on EFG Bank (Monaco), who now lead the series by overall by 3 points, used their huge bank of experience to their advantage by positioning themselves perfectly for a 40-degree windshift on the right-hand side of the course. This put them over two minutes ahead at the first mark in the light 3-5kt breeze.

They then went on to extend their lead and, in a freshening sea breeze, finished the race 10 minutes ahead of the next boat - Messe Frankfurt Sailing Team.

Katie Pettibone and her all girl team on Al-Thuraya Bank Muscat had a good start and read the shifts well. Although they were disappointed not to have retained second position, were thrilled to have finally gained a podium result.

Teams are this morning preparing for the start of Leg 4 to Ras Al Khaimah.

At 43 nautical miles, this is the shortest leg of the course and one of the most straightforward. On the way to the start the fleet will leave Dubai's famous landmarks, including The World to starboard, before making their way to Al Hamra Marina and Yacht Club, Ras Al Khaimah. 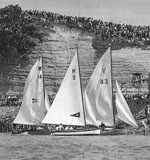 There can be no doubting New Zealand's outstanding contribution to the 75 years history of the JJ Giltinan 18ft Skiff Championship since 1938.

The Kiwis have not only been represented at each regatta but their input of design and technology innovations have had an enormous affect on the development of the class.

While victory has eluded them since Terry Mc Dell skippered Travelodge New Zealand to victory at Auckland in 1974, the Kiwis have a proud record of seven wins since 1939.

Aside from the championship victories, New Zealand's innovative contribution has been a highlight of the JJ Giltinan Championship's history.

Do you dream of sailing a Volvo 70? The keel fully canted. Flying a huge spinnaker with six of your crewmates grinding on the pedestals in tropical sunshine. Feeling the power as the boat accelerates down a wave at 25+ knots in warm Caribbean winds...

This could be you!

Monster Project, Team Russia's boat (Kosatka) in the 2008 Volvo Ocean Race, is the only Volvo Open 70 available for charter - a unique opportunity for amateur sailors to experience these amazing racing machines!

The RORC Caribbean 600 is the headline offshore racing event in the Caribbean. With a 600 mile course around 10 islands, it's an epic race to rival the Fastnet - but much warmer!

Join us on Monster Project for our RORC Caribbean 600 program:

In the Final - the battle of the Georges - Gautrey, versus RNZYS Lion Foundation Youth Training Programme member Brasell, lost the first of three matches by 17 seconds before fighting back to take the last two and deciding matches by 8 and 17 seconds respectively.

In the Semi-Final battle of the Wellingtonians Gautrey, the younger of the two Royal Port Nicholson skippers, had an epic duel against his older counterpart, Sam Mackay.

Cornah and Lasko who showed the way early last season will be facing no less than three other GBR teams with UK team race champions Littlejohn and Hebbert lined up as the team to beat. Representing Spinnaker Auspicious the team has not lost an event since they entered the tour last September.

Italian teams from Yacht Club Costa Smeralda and Rome will be looking to set the record straight,with  the Dutch and Spanish, yet to win an event seeing this as their  big opportunity; while GBR's Serpentine Racing led by Henry Arnold will be there to defend his pole position in the World Rankings. 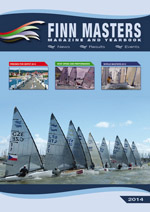 The Finn Class has published the first ever edition of the Finn Masters Magazine and Yearbook. During discussions at the 2013 Finn World Masters in La Rochelle, France, the idea of a dedicated magazine for the ever growing number of Finn masters was put forward. Eight months later the first edition has just been published.

Finn masters numbers are escalating worldwide as aging Finn sailors come to realise that Finn sailing is not just for the young Olympic hopefuls, but can be for the rest of your life. The Finn class has perhaps the largest masters movement of any dinghy class worldwide and this magzine is published in recognition of this fact. Last year the Finn World Masters attracted a record 285 entries.

As well as the printed edition, which is sent to Finn Masters worldwide, there is an extended e-dition that is available to all. It contains an extra ten pages of photos, maps of forthcoming venues, video links and more.

It can be viewed here: issuu.com/finn-class

The Foiling Week: Schedule Announced
The Foiling Week is still four long months away, but we are already signing important deals and receiving enthusiast VIP confirmation. Nonetheless we now have a schedule for the week (July 4th - 12th), during which in the morning we will have forums, roundtables and presentations, and in the afternoon there will be on water trials available for those who sign in and Moth and Kite Invitational.

Since the last announcement, the organisers have had quite a few confirmations from the Forum key role players. People with deep knowledge on the foiling engineering, whose experience and know-how will be shared to the audience. Among them Kevin Hall from last America's Cup Challenger of Record Artemis Racing, where he worked as head of performance and instruments department, Giorgio Provinciali, AC 2010 winner with BMW Oracle Racing, he was appendage design and performance prediction program specialist for Luna Rossa Challenge 2013, Tom Speer, OTUSA Aero&Sail project leader winning AC34 in San Francisco, Chris Edward and Philip Kenchigton from C-Fly Hydrofoil Catamaran.

Seahorse March 2014
What's in the Latest Edition Of Seahorse Magazine 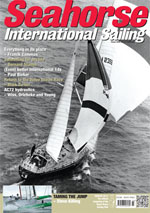 Plea To End Yacht Boycott Of Belgium
A hard-hit leading Belgian yacht club, suffering from the boycott of the country by UK yachtsmen over the red diesel imbroglio has made an appeal, via Yachting Monthly, for sailors to come back to Flanders.

Maurice Beke, secretary-general of the Zeebrugge-based Royal Belgian Sailing Club dubbed the red diesel controversy as a 'myth' and has written to YM stating no UK yachtsmen, armed with a VAT receipt will be fined for having red diesel in his tank.

'It would be a real pity to have a cruise to such a magnificent area as the Belgian coast spoilt by the red diesel myth. Indeed, stained diesel is by decision of the Ministry of Finance no longer an issue for British yachtsmen. And should you have a random Customs visit, which is rare, then a simple recent receipt, no longer than one year old, from a UK fuel station, proving that VAT/Excise was paid in the UK, will be sufficient.

However many British yachtsmen will remain skeptical until an official statement is made from the Belgian Government stating that they will not penalise UK sailors for having red diesel aboard.

The argument is between the EU which says the UK is breaking European regulations on the use of red diesel, and the British government which says red diesel can be used by leisure sailors as well as fishermen, because duty is paid - albeit only for that used in propulsion and not that used for heating. 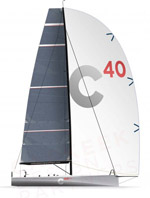 Reflecting the growing interest in the 40ft race boat scene on a global, national and, in many cases, local level, the Mk2 version of the Carkeek C40 is attracting substantial interest.

The first of the Mk2 Carkeek C40s, for a prominent Japanese owner, is currently in build at Premier Composite Technologies in Dubai and is due to be shipped late February. The second and third boats are allocated and will build immediately after boat number 1. Carkeek Design Partners have responded to enquiries from the USA, South America, the UK, Australia, Italy, Spain, Germany, Scandinavia, France and throughout Asia and are in discussions about further sales.

The Mk2 Carkeek C40 further develops just about every key area of the Mk1 version, which in reality is a two-year-old design. It is the product of all the empirical data collected from the

The Mk2 Carkeek C40 incorporates a new rig layout and sail plan, appendage layout and an updated hull form. Aerodynamics are improved, windage is reduced and the deck layout is further optimised.

Design Unlimited, a leader in the design of luxury interiors for performance super yachts and sailing yachts, will see the first fruits of its collaboration with Sirena Marine and renowned yacht designer German Frers unveiled at the CNR Eurasia Boat Show in Istanbul this Friday.

In common with the 68 foot and 84 foot models that are currently under development, the Euphoria 54 is for enthusiastic sailors seeking an easy-to-handle yacht that is capable of fast passage making but which also provides a comfortable platform for entertaining and relaxation at anchor or in harbour.

Below deck, Design Unlimited has laid out an interior that has three cabins, all with en-suite bathrooms, along with a generous saloon. 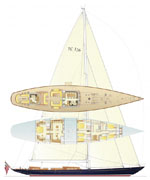 In November 2012 a repeat client commissioned Claasen Shipyards to build a new Truly Classic 126ft. Claasen Shipyards has built many such yachts, all of which are designed by Hoek Naval Architects and are characterised by their combination of classic lines and advanced technologies. The summer of 2013 marked the start of the construction of the new Truly Classic hull at Bloemsma Aluminiumbouw in Makkum and it is now nearing completion.

The new yacht will be the largest in the Truly Classic range. She is being built in accordance with MCA LY2 regulations, allowing the yacht to feature in competitive sailing races as well as being used privately or for charter. The deck layout is based on the successful concept of a private owner's cockpit aft and a guest cockpit and deckhouse amidships.

The hull of the yacht was turned by Bloemsma Aluminumbouw in Makkum several weeks ago and will soon be transported to the yard in Zaandam where the yacht will be finished for delivery in 2015.

In addition to this new Truly Classic 126 the yard has two Truly Classic 90ft yachts under construction and will soon start the build of a new J class.

2014 is off to an excellent start for Finnish luxury yacht builder, Nautor's Swan with the sale of Swan 115 FD-002. The new flagship of the SwanLine, the Swan 115 is a high-performance yacht developed for both bluewater and long distance cruising.

Two Swan 115s are currently in build at Oy Nautor AB: one Swan 115 S (semi-raised saloon) with lines and features designed predominently for cruising and a Swan 115 FD (flushdeck) with a slightly sportier appearance and configuration.

The Swan 115 has definitive hull lines, with a wide stern, twin rudders and a high grade steel keel blade with a T-bulb. Nautor also offers the option of a lifting keel, ideal for cruising the corners of the globe. Designed by naval architect German Frers, the Swan 115 is built of pure carbon (pre-preg), from a female mould, completely in-house at Nautor's. 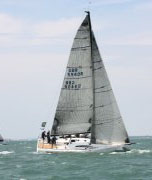 Any sensible offers will be considered. Tokoloshe has been campaigned by the same owner since new and has had no expense spared in order to keep her competitive and looking good.

This yacht is very well equipped and prepared and is ready to sail.