Brought to you by boats.com Europe, Scuttlebutt Europe is a digest of sailing news and opinions, regatta results, new boat and gear information and letters from sailors -- with a European emphasis. Contributions welcome, send to

Maserati Retain Lead Of Cape2Rio
Click on image to enlarge. 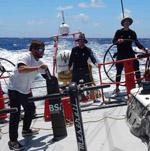 Maserati continues her gallop across the South Atlantic well out in front of the rest of the fleet in the Cape2Rio Yacht Race. Maserati is now 2,000 miles off Rio de Janeiro. She is also pulling even clearer of her two main rivals: the Australian 53' Scarlet Runner is now lagging 300 miles behind the Italian boat in second place while the South African Open 60 Explora is 600 miles in her wake.

"We are making 16 knots in an 18-knot wind," said Giovanni Soldini. "We gybed north to try to find a bit more air. When we gybe south, however, we get nearer to the best possible route. It's a constant compromise between following an efficient route and having wind. We've had a tear in the mainsail for a few days now and we're keeping an eye on that. Pierre Casiraghi has proved himself a very good helmsman into the bargain. We have a very nice rhythm aboard now. The crew are working very well together and the boat is on form too."

Barkow and Mettraux Join Team SCA
Team SCA has today confirmed that Sally Barkow (USA) and Justine Mettraux (SUI) will be joining the all-female team for the 2014-15 Volvo Ocean Race.

From hundreds of applications some 35 women have been invited to take part in month-long trials at the team's base in Lanzarote, Spain. Each candidate has to go through a rigorous training and physical programme as well as sailing onboard the team's Volvo Ocean 65.

Sally Barkow (33) has been on and off the Olympic circuit for the past 10 years and competed for the US team in the Beijing Olympics in 2008. A skilled match racer, she has been with Team SCA for the past few months.

Justine Mettraux (27) joins the team fresh from competing in the Mini Transat, where she finished in second place, a position that secured the best performance by a woman in a Mini Transat series boat in the event.

She has been part of the Mini circuit in Switzerland and since 2012 has been regularly appearing on podiums. She was also part of the successful Team SCA squad for the Fastnet Race, coming in at the last minute to replace an injured colleague.

The 60th London Boat Show takes place at ExCel London between 4 - 12 January and with over 400 exhibiting companies you are sure to find just what you are looking for. The show is the size of 6 football pitches and will be a landmark event for the boating community with returning brands such as Jeanneau, Volvo and Honda.

New to the London Boat Show is the Adventurous Cruising Zone supported by the World Cruising Club which will present extraordinary experiences of boat owners. At the 'Ask the Experts' area well known sailors, Rod Heikell, Peter 'Stokey' Woodall and John Goode, will be on hand to share their years of knowledge on subjects from navigation to boat handling and pilotage.

Not only can you come and see amazing feature boats including The Royal Navy Orcs, Sailing Barge Melissa, Motor Tug Kent, the Challenger 72 and more, but Sir Ben Ainslie, the legendary Olympic sailor, has kindly let us borrow his famous catamaran the J.P. Morgan BAR AC45 for you to admire. This can be found at stand number G28O.

Additionally, the London Boat Show team has a competition for a chance to win fantastic J.P. Morgan BAR signed clothing. To enter competition simply tweet a picture of yourself in front of the AC45 display using #raceforall in the tweet. The winning tweet will be picked at random and announced on Friday 17 January.

For more information and to buy tickets visit: www.londonboatshow.com 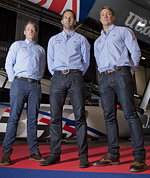 Also revealed were three of the four sailors who will compete with Ainslie in the Extreme Sailing Series 2014: Team GB teammates and Beijing Olympic Gold Medallist's, Paul Goodison and Pippa Wilson, alongside bowman Matt Cornwell, a previous Match Racing World Champion with Ainslie. The final crew member will be revealed before the first event of the season in Singapore.

The team also continue to be supported by Henri Lloyd as their official technical clothing partner and Scorpion Ribs who are supplying the team chase and hospitality boats for the Series.

The Commodore of the ISC, John Dudley, speaking on behalf of the entire Race management team said:

"Over the past nine years of J.P. Morgan's sponsorship, the Round the Island Race has developed beyond everyone's expectations with new technological initiatives being introduced, alongside fundamental improvements such as the provision of free water taxis to ferry competitors from berth to boat and back. We have also been fortunate to enjoy hosting Sir Ben Ainslie, also sponsored by J.P. Morgan, and the Race media coverage has broadened as a result. We enjoy working with J.P. Morgan's team for the benefit of everyone associated with the Race."

The global profile of the Round the Island Race has also been significantly enhanced as tracking and EventTV, the live Blog and 'as live' imagery from the race course has bought the Race to life for armchair spectators around the world.

The first entry recorded for the 2014 Race was from Simon King with Aurora, a Jeanneau 36i. Simon is a sailing school principal and RYA instructor but keeps the Race weekend free to sail with his mates on a "boys weekend".

The winner of the ISC's December prize draw for a free entry to the 2014 Race is Vicky Williams and her vessel, a Challenge 72 Challenge Wales. On Race day they will be sailing with disadvantaged young people.

To be part of the exciting on-water action on Saturday 21st June and benefit from the early bird entry fee for the 2014 Race you need to enter online by midnight on February 1st, after which the Standard entry fee applies until midnight on Saturday 7th June.

Do you dream of sailing a Volvo 70? The keel fully canted. Flying a huge spinnaker with six of your crewmates grinding on the pedestals in tropical sunshine. Feeling the power as the boat accelerates down a wave at 25+ knots in warm Caribbean winds...

This could be you!

Monster Project, Team Russia's boat (Kosatka) in the 2008 Volvo Ocean Race, is the only Volvo Open 70 available for charter - a unique opportunity for amateur sailors to experience these amazing racing machines!

The RORC Caribbean 600 is the headline offshore racing event in the Caribbean. With a 600 mile course around 10 islands, it's an epic race to rival the Fastnet - but much warmer!

Join us on Monster Project for our RORC Caribbean 600 program:

Once again the tour will be contested in identical Farr 30 one-design keelboats, calling in at eight stopover world class marinas in four nations, from Bahrain to Qatar and the United Arab Emirates with the finish in Oman's beautiful capital city, Muscat.

Local sailing enthusiasts will be able to catch the world-class action in Oman with a stopover in Dibba on 20th February, followed by Mussanah Marina to reach Al Mouj Marina in Muscat on 24th February for the closing ceremony.

Panels from Boating Business and the Marine Trades Association consider the nominations for the annual awards, which were presented in front of a packed audience of industry professionals at the Crowne Plaza Hotel in London's Docklands. The awards are sponsored by Boating Business, Matchtech and Ocean Safety.

The 25th anniversary of this world class international regatta will feature elite-level competition in the sailing events selected for the 2016 Olympic and Paralympic Games, which will be held in Rio de Janeiro, Brazil from August 5-21 and September 7-18, respectively.

ISAF medals will be awarded to the top three boats in each Olympic and Paralympic class on Saturday 1 February. Competitors in the Paralympic classes will have five days of fleet racing (Monday-Friday).

Regatta Headquarters will be located at the US Sailing Center Miami, an official Olympic training center, in the Coconut Grove section of Miami, Fla. -- Jake Fish

* From Malcolm McKeag: Without doubt there were races in open water before the RTYC's Dover-Cherbourg, and without doubt there were other clubs in addition to RTYC organising them. The trans-Atlantic race Talbot and Alf Loomis refers to were I think private matches for wagers between owners. I don't think they were called, at the time, "Ocean Races" and I don't think they were organised by a yacht club and were open to all comers - which was my only point. Pace all other claimants.

Click on it and drag it around, zoom in to any view you want, like Google Earth.

This Beneteau First 40.7 has been carefully looked after by its current owners. Refitted in August 2012 when a full survey was also undertaken. This Beneteau had a new engine fitted in 2008. A berth at Cardiff Marina is available for the new owner at competitive rates. This vessel is coded and has been used for occassional charter.

About boats.com
boats.com is a highly powerful and effective global marketing solution for the boating industry. With half a million new and used boat listings, offered across the globe by manufacturers, brokers, dealers and private advertisers, it is the most comprehensive site in the World. Over 1.4 million boating consumers visit our sites every month, generating up to 16.5 million page views, with over 500,000 of these visitors coming from within Europe. Whether you are providing a product or service or selling new or pre owned boats, boats.com offers an extensive and varied range of solutions, tailored to suit all marketing budgets offering extensive local and international coverage.