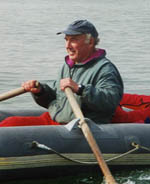 Broadcaster Dennis Skillicorn was the first journalist to be embedded on a round the world race yacht, bringing alive the trials, triumphs and tribulations of watch routines and rushing downwind through plumes of spray. He joined the crew of Creighton’s Naturally in the 1985/6 Whitbread round the World Race and later aboard the British Steel Challenge yacht Commercial Union Assurance.

Creighton’s Naturally was one of the last to finish, but with Dennis reporting live from the Needles all the way to the finish line in Southampton Water, the yacht received the biggest welcome home. After that, the potential for embedding a journalist within the crew was fully appreciated and led to the video feeds that now reach our computers every day from the current Volvo Ocean Race yachts.

Ali McKichan, a crewmember on Commercial Union Assurance during the 1992/3 British Steel Challenge, recalls the warm, kind-hearted side of Dennis Skillicorn’s character. “He always had an amusing story to get us through the long night watches. I particularly loved it when it was his role to wake the ongoing watch. Unlike others, Dennis would say softly. "Good morning Ma'am. The sun is shining, the wind is fair and I have a wonderful cooked breakfast ready for you in the saloon" - all delivered in that beautiful lilting voice of his. We all knew none of it was true, but it definitely made it easier getting out of our bunks!”

Born in 1932, Dennis grew up the Northwest shipbuilding town of Burrow-in-Furness and began an apprenticeship there until called up to do his National Service in the Royal Navy. Much of his time was spent working in Portsmouth Dockyard and he stayed rooted in the South of England for the rest of his life.

It was through the Navy that he first got his taste for travel.

A born optimist and opportunist - he never turned down the chance of reporting live aboard a yacht however far it would take him - and treated life in exactly the same way. In 1953 when working as a salesman peddling gaskets to the big liners coming in and out of Southampton, he met his wife Marie at a friend’s wedding and proposed the same weekend. They were married a year later and enjoyed a fulfilled life together.

Their daughter Jane, who followed in her mother’s foot-steps as a teacher, recalls the day her Dad decided he wanted to become a broadcaster. “He had read about plans the BBC had to start a series of regional radio stations and came home to tell us that he was going to become a journalist with BBC Radio Solent. We didn’t think too much of it at the time but he began volunteering on local hospital radio before starting to submit stories to the BBC. He was lucky to have a really understanding boss who allowed him time off to develop his broadcasting skills.”

At the start of this career change, the family relied on Marie’s wages as a teacher to make ends meet, while Dennis carved out a niche within the BBC reporting on the unusual, often zany characters and their achievements rather than hard news. Starting with Radio Solent, he soon became a regular on BBC 4, Radio 5 Live and later on BBC South TV.

During the 1960s and ‘70s Dennis became the voice of Cowes Week, reporting directly from the decks of the 1930s J Class yacht Velsheda, Ocean Leopard and anything else he could hitch a ride on. His first regular programme on BBC TV was ‘Country Diary’, followed by the sailing programme ‘Open Waters’.

He travelled widely and enjoyed a lifetime of wonderfully risky and exhilarating experiences. He flew in a Harrier jump jet, lived in a snow hole with the SAS, did a parachute jump into the sea with the Parachute Regiment and stood atop every Needle at the western end of the Isle of Wight suspended from a helicopter.

In later years, Dennis took up rowing his 9ft inflatable dinghy, going out with the first lock opening at Hythe Marina each morning in an effort to keep fit. He ventured as far as Portsmouth and Lymington, before announcing to his family in 2001 at the age of 69 while suffering a double hernia that he would attempt to row around the Isle of Wight. He did so that August, completing the 60 miles in 19 hours without fanfare or publicity simply to prove to himself that he could, but was rewarded at the following Southampton Boat Show when Avon presented him with a new replacement for his aging Redcrest dinghy.

Dennis had a knack for getting on with people from any social group. His warm-hearted broadcasts turned Theo the tramp into something of a local celebrity, and he recorded the moving accounts of those who survived the sinking of the Titanic and D-Day landings. He made a TV series driving a horse-drawn gipsy caravan along the Pilgrim Way from Winchester to Canterbury recording the memories of travellers past, and built up a great personal relationship with Lord Mountbatten, often sharing a whisky and a few tales at his Lordship’s stately home at Broadlands near Southampton.

When the BBC tried to introduce a retirement policy at the age of 75, Dennis joined a group of fellow pensioners to form ‘The Zimmers’ to voice the feelings of isolation and imprisonment suffered by the elderly. They recorded a cover version of The Who’s ‘My Generation’ at the famous Abby Road studios in London and the record climbed to No 26 in the UK Singles Chart in May 2007

His last interview, conducted at the age of 80, was with the Duke of Edinburgh. The two got on so well that Dennis ended up helping Prince Philip mend ornaments while they chatted.

Sailing TV broadcaster Matt Sheahan says of Dennis. “He was an absolute gentleman and a great reporter. He had a gentle but informed style that kept me thinking about the intelligent side of journalism.”

Dennis supported his two children Roger and Jane in achieving their dreams and goals. Jane became a teacher of disabled children and he took a keen interest not only in her vocation but supported other disability organisations including the Solent Dolphin charity, for which he skippered the MV Allision McGregor, catamaran based close to his home in Hythe Marina, Southampton, providing trips for people with disabilities. He was just as supportive for Roger’s desire to reach for the skies and equally proud when he became a pilot with British Airways.

Dennis Skillicorn’s extensive library of radio interviews and broadcasts has been saved for posterity and will be archived at the Wessex Film and Sound Archive based in Winchester. http://www3.hants.gov.uk/wfsa.htm

Dennis is survived by his two children Jane and Roger and two grandchildren. He died peacefully on December 21st surrounded by family and close friends. His funeral will take place at Romsey Crematorium at 16:00 on Wednesday 10th January.