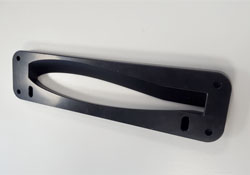 High performance design and development under pressure is what we expect at America’s Cup level but that does not easily translate into Olympic Nacra 17 one design foiling multihull production, with the manufacturer using a host of cutting edge, (many would say bleeding edge )subcomponent suppliers and that is a lesson that World Sailing is learning right now.

We watched as Emirates Team New Zealand and the lesser lights used large teams of shipwrights to rebuild their foiling cats, well nigh experimental,night after night, but it’s one thing to surgically modify a single racing machine in the wee hours, it’s quite another to do the same thing when there is an Olympic one design class fleet anxiously competing ahead of Tokyo 2020, expecting to be able to train uninterrupted across the quadrennium in a settled design.

Drama at the Aarhus World Championship Test event in Denmark yesterday when the Olympic double handed multihull Nacra 17 class stopped sailing with the boats being ‘recalled’.

The alarming message from World Sailing; ‘The Nacra 17 medal races scheduled for Saturday 12 August are cancelled. World Sailing received a notification from Nacra Sailing on Friday 11 August stating that are recalling all foiling configuration Nacra 17s (including retrofitted versions) to replace the bearings for the dagger boards. Nacra Sailing has urged all owners not to sail these boats until the replacement bearings are fitted.”

There were Instant visions of 45 foiling Nacra 17’s on trailers lined up outside the Nacra Scheveningen office just north of The Hague in the Netherlands, with multihull crews fighting to get their boats back, now just a month before the World Championships off the French Mediterranean coast at The Grand Motte, which if the current problem is not resolved could even be cancelled.

It’s not as bad as that fortunately but the fact is the design and manufacturing woes of the Nacra 17 class continues as Class Manager Ben Remocker explained today.

‘The chain of events that lead to this recall are as follows:

‘Two test foils broke about six weeks before the first delivery of foiling equipment. These breaks were of the prototype foil design, and occurred before production began. The cause was an unplanned-for-failure mechanism that occurs when the boat is heavily loaded to leeward and then the windward foil catches. This occurs primarily when the leaps out of the water and gets push downwind, then putting the full force of motion into the typically unloaded side of the windward board.

‘These first breaks were at the inside of the elbow of the daggerboards. The foil was redesigned to account for breakage at this area, and we have not seen failure there so far. ‘The boats and foils were then distributed to the first 40 teams. In the second or third day of sailing, the Swedish team broke on of their foils in the manner described above, but the break did not occur at the elbow as in previous iterations, instead it broke at the point of exit of the hull at the ‘bearing’ surface of the cassette that holds the board in place

‘The current cassette, photographed above, is the same concept of design as used in the A-cat 4-point filing designs. It is made from an advanced plastic called POM and is a single piece. Due to its single piece construction, one side must be very shallow to allow the curved boards to fit though the gaps while maintaining a tight fit in sailing position. As such, the bearing surface on the typically unloaded side is only a 1mm high ledge along the full length of the surface. On the other side, the typically loaded side, the surface has a 19mm high ledge. ‘Upon initial release of the first boards, there were two other major issues with the new centreboards.

‘They had many pinholes, a typical by-product of the construction technique, that were not sealed. When the boards were sent to the sailors, many of the boards had these pinholes which rapidly filled the boards with water, itself a problem, and it could have caused further problems over time.

‘The second major issue was that the paint (clearcoat) used on the boards appears to have been from a bad batch of paint. It was too soft, too easily scratched, and became cloudy upon light use.

‘After investigating the issues, working with the supplier, and solving some other more detailed and minor issues, Nacra Sailing informed all the sailors that all 180 of the first set of boards would be replaced, free of charge, at the earliest opportunity. Some of those replacements have already occurred.

‘This week, two more boards broke in the same manner as the Swedish boards. On Thursday, Nacra Sailing adjusted their bend/break test rig so that instead of using a broad hold of the exit point of the boards it point loaded them like they are on the boats themselves from the cassette. They were able to reproduce the breakage as seen by the two boards this week and the Swedish board. The point loading from such a small surface crushes the matrix and then it shears through the board, like a knife edge would do on a smaller scale. On Friday Nacra Sailing issued the recall and reviewed options with their design team.

‘The planned design solution scales down the same style of cassettes used on the America’s Cup boats. In order to provide the same 19mm bearing surface as the loaded section, a 2-piece POM cassette, will replace the current cassettes. On Saturday the part was designed, the following is a rendering of the replacement part design.

‘On Sunday, a prototype of the replacement part will be manufactured, and on Monday they will bend/break test the part to ensure it solves the problem identified. Once this test has been completed, Nacra Sailing will issue updated guidance to the sailors affected, especially about the time frame required to build and distribute replacement parts. Note: this recall is aimed to stop teams sailing on a system that has a known failure mechanism. Replacing these cassettes is a simple process that does not require all of the boats to be returned to a factory.

‘The Nacra 17 Class executive met on short notice this morning (Saturday) to review the situation. Exactly three weeks from today is measurement for the 2017 World Championship. ‘Unfortunately, neither members of the board who work for Nacra Sailing made themselves available for the call at short notice. There are two scenarios that are critical to the class right now that relate to the World Championship

‘The less obvious issue relates to the breakages themselves. Have the board that are in use been compromised from sailing on this highly loaded surface or is it a catastrophic failure mechanism only. Put more simply, do the boards degrade and then break, or is it a single event that overloads the boards, crushes the matrix, and then the board fails. If there is a chance of degradation, then the same caution that has beach all boats this week continues to hold until all boards are either replaced or ultrasonically examined.

‘There is a lot of pressure on the class to hold a world championship at this point, with teams having booked and paid for accommodations, travel plans, entry fees, etc., and simultaneously there is a requirement that we only hold a championship where the manufacturer can ensure that any recalled parts have been replaced or tested to a suitable level they can be confident of suitability for racing.

‘Nacra Sailing will continue to work on technical and production solutions to the problems discovered. By Monday we should have more information about the new design and availability.

‘The Nacra 17 Class will hold an executive meeting following this update, and along with our partners in World Sailing, La Grande Motte (World’s Venue), and class member consultation, and communicate intentions regarding the 2017 World Championship, no later than Wednesday August 16th. The World Championship is currently planned for September 5-10, in La Grande Motte, France. Class President, Marcus Spillane, will continue to update key members of World Sailing as to the developments as they occur.’

‘Nacra Sailing is recalling its Nacra 17 Foiling configuration over an issue that could cause the daggerboards to fail without warning during operation.

The hazards: a failure of the daggerboards during operation could potentially cause sailors to lose control and crash.

The fix: NACRA SAILING will notify owners, and dealers. Replacement bearings will be made available for all customers. The repairs will be performed free of charge.

Owners should: if their boat is included in this NACRA SAILING recall, then owners can:

We are expecting to have first availability of replacement bearings end of next week (18/8/17] and full availability the week after. More details in follow up communication.

Nacra Sailing urges the owners not to sail the boat until the replacement bearings are fitted to avoid incidents/breakages.