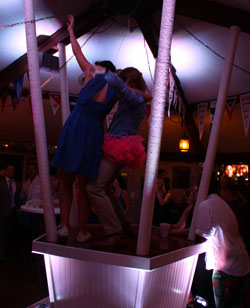 “Wow…was this a different Wight Vodka Favourite Yachting Bar competition,” commented Dan Hiza, founder of Wight Vodka. “We had some of the world’s best yacht clubs and sailing bars in the mix this year, from the Royal Bermuda to the Bitter End, Royal Hong Kong to the Happy Island Bar in the Grenadines, but in the end, the Pewaukee Yacht Club in Pewaukee Wisconsin, USA, has come across the line in first place!”

So, some of you may be wondering where the Pewaukee Yacht Club is, aren’t you?

Well, let the crew of Wight Vodka be the first, or the 70,001st to tell you that this is the venerable home of sailing, yacht racing and all things winches, as the Pewaukee Yacht Club is located in the heart of Wisconsin’s lake country, and indeed, the home of Harken.

“The voting this year was absolutely full-on,” said Dan. “With over 130,000 votes cast over the last month, Pewaukee narrowly edged out the Rochester Yacht Club in up-state New York, with the Windward Mark at the awesome Bitter End Yacht Club placing a 3rd place podium finish.”

The top bars of the 2016 competition placed in the following order:

“As a Green Bay Packers fan, (and (sorry), a New England Patriots fan too), I do love Wisconsin’s beautiful lakes, forests, cheese and Aaron Rodgers’ quarter back rating” continued Dan, “but if you ever find yourself in Beach Bay on the southern coast of Pewaukee Bay in the heart of Wisconsin, let’s meet up for a Wight Vodka cocktail at 2016’s favourite yachting bar, the Pewaukee Yacht Club!”

Here’s to the members and followers of Pewaukee YC! You’re well deserved to be up there with the best of the best.

* Editor: Pewaukee is a Mecca on the sailing map.  Both Harken and Melges have their global headquarters there - and I know they are very aware they were in the hunt and all got behind the club voting.

The photo at right and in the gallery... what appears to be what your humble narrator believes to be a, sadly, much overlooked essential for a yachtie bar... a Go-Go dancer cage (for both men and women, of course...)

From one of the PYC's poobahs:

"Yeah, of course it wasn't intended to be that but sailors have a way of turning any innocuous object into something to party with.  Clearly this was a pretty good party."

And from a famed (but unnnamed here) PYC member:

PYC is famous for "The Bar Walk" which is a required activity for whatever competitor is in last place after day two of three during the annual E Scow Blue Chip Championship regatta always held in September. This is the event where we bring in a mystery guest to compete - with the likes of Spithill, Connor, Cayard, Holmberg, Perry, Ullman, Jobson, Isler, Mckee, Gulari, Campbell, Coutts, etc. having competed in the past.

This form of punishment and public ridicule is a time-honored tradition that always has these champion competitors a bit more on edge in racing on day two. With the notoriety of international exposure of a global yachting media partner like Seahorse, I'm certain sphincters will be a little tighter on the start line! Last year, during the Blue Chip's 50th's we had Terry Neilsen of Finn and Laser sailing fame up there in boxers and a necktie. He ended up sporting that outfit for the rest of the evening in pure Finn style class.

And finally... something to look forward to this summer when some BIG Harken parties happen there... another unnamed Harken executive has promised a free rounds of drinks to everyone at the club party. On Peter Harken's tab!

Congratulations to the Pewaukee Yacht Club!

Raise a toast with some Wight Vodka: wightvodka.com 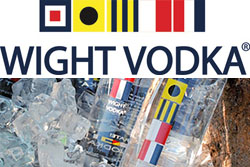 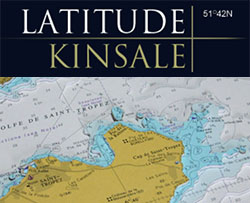